page: 1
23
log in
join
share:
gortex
+4 more
posted on Apr, 24 2020 @ 01:49 PM
link
30 years ago today the Hubble telescope took its place in space as our eye in the sky peering out into the Universe , 30 years of discovery and mind boggling pictures from the dawn of creation , to celebrate the anniversary the Hubble team have imaged the "Cosmic Reef" , two Stellar nebulae in our neighboring Large Magellanic Cloud. 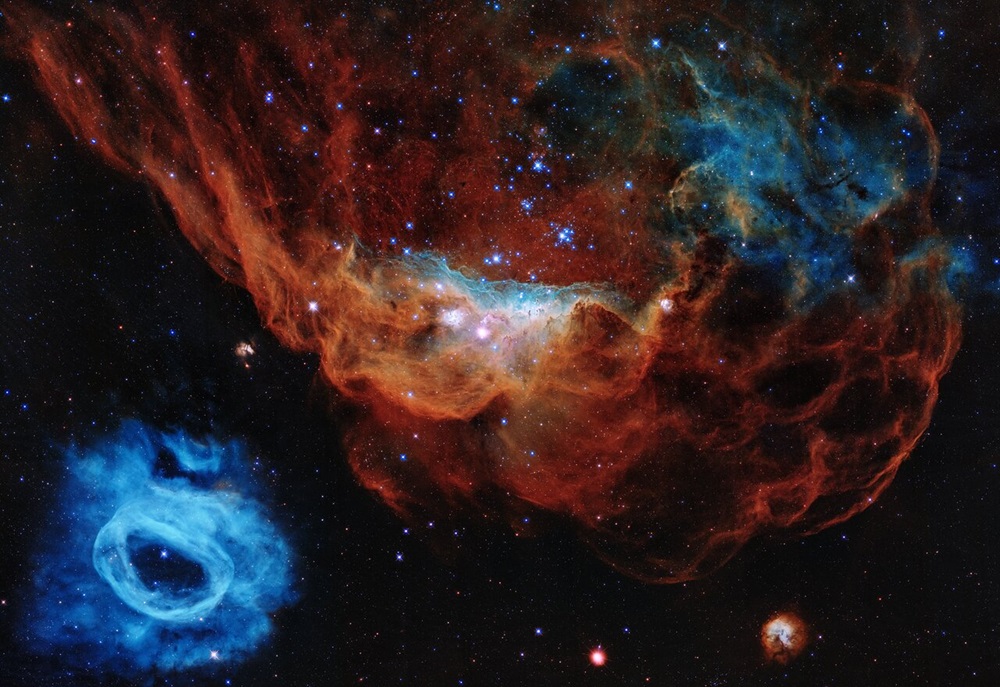 
This science visualization presents the dramatic landscape of two nebulas in the Large Magellanic Cloud. The video, based on images by NASA's Hubble Space Telescope, takes viewers on a close-up tour of the nebulas' three-dimensional structures, as envisioned by scientists and artists.

The movie begins with the Hubble view of NGC 2014 (lower left) and NGC 2020 (upper right). The region has been nicknamed the "Cosmic Reef," because of its resemblance to an undersea world. The camera then flies past myriad stars for a close-up look at NGC 2014. The first stop is the bubble of hot gas on the left that has a coral-like appearance. Energetic ultraviolet light from the system's most massive stars has heated the gas, while strong stellar winds (streams of charged particles) help create its bubble structure.

The journey continues into the heart of the nebula, home to extraordinarily massive and bright stars. The glowing gas in this region is bathed in the stars' intense luminosity. In contrast, the dark, denser gas is resisting that radiation, and is blown back to form craggy, mountainous shapes. The virtual flight moves past ridges, valleys, and pockets of new star formation.

The camera then rises up and over a ridge of NGC 2014, revealing the three-dimensional structure of neighboring NGC 2020. The Wolf-Rayet star at its core is the mammoth, intensely hot source of this nebula. Episodes of outbursts from the young star have produced cloudy rings and clumps in the bright blue gas. While Hubble views NGC 2020 looking down the axis of the stellar outflows, the visualization finishes with a side view that illustrates the nebula's double-lobed structure.

Happy Anniversary Hubble team , here's to many many more.

I've always wondered what kind of images Hubble could have provided of Halley's Comet if it had launched 4-5 years earlier? Granted, it wasn't designed for that, and it had some glitches upon the way that was rectified. One can dream though.

posted on Apr, 24 2020 @ 04:53 PM
link
Just wondering .. How does the satellite reposition itself now without the space shuttle? As I understand it, it has no on board repositioning thrusters. So if it ever needed to be moved so that it would not fall to earth... How would that be accomplished?
I've asked this before in many different places and forums but no one has ever answered this simple question.

posted on Apr, 24 2020 @ 04:58 PM
link
It’s a spectacular feat of human ingenuity that has provided us with awe inspiring and mind boggling pictures since it’s inception.

Thank you Hubble and the team that made it happen.

It's due to come down sometime in the 2030's unless its life is expanded and a future mission goes up to give it a nudge.


There’s another consideration: HST is not completely above Earth’s atmosphere. It’s in low Earth orbit, which means it still experiences some drag, or friction, from air particles as it circles Earth. HST will eventually experience enough atmospheric drag that it will crash to Earth; this is projected to occur by the mid-2030s, regardless of the telescope’s operational status. But if Hubble gets a boost, perhaps from one of the many private spacecraft currently under development, it could be back in business.
astronomy.com...

Great pic, hippy birthday hubble. Keep winking.
edit on 24/4/2020 by nerbot because: (no reason given)

originally posted by: 68Satellite
Just wondering .. How does the satellite reposition itself now without the space shuttle? As I understand it, it has no on board repositioning thrusters.

That's correct. The ISS has thrusters to boost its orbit every so often, but Hubble doesn't so it's constantly falling. If nothing is done, it may burn up in earth's atmosphere in 2028 or later though some remnants would likely strike the Earth.

So if it ever needed to be moved so that it would not fall to earth... How would that be accomplished?
I've asked this before in many different places and forums but no one has ever answered this simple question.

The three options would be to do nothing in which case the impact point wont be controlled, or either control the fall back to earth so they aim for a target like the Pacific ocean for it to crash upon impact, or to boost it so the orbit lasts longer.

For the last two options, they would probably use something like Space Launch System if it's ever completed. We don't have the shuttle anymore, but the SLS would be a shuttle derived launch system if they ever complete the project, but it's on hold, so I don't think anybody really knows at this point. If you see the Hubble crash to Earth in 2028 to a random impact point, then you can assume it never got boosted! If it crashes into your garage, maybe NASA can buy you a new garage and cars, that would be cheaper than the estimated 1 billion dollars for a launch of SLS, not to mention the $2 billion a year ongoing cost of running the program.

edit on 2020424 by Arbitrageur because: clarification

Yep. They've been planning this cash grab for 30 years... The telescope, the photos, everything, it was all for this 30yrs anniversary scheme.

posted on Apr, 25 2020 @ 05:53 AM
link
With the Webb telescope maybe launching next year maybe some money can be put to updating Hubble...