"I have instructed the United States Navy to shoot down and destroy any and all Iranian gunboats if they harass our ships at sea," Trump tweeted.

The Iranian ships repeatedly crossed in front and behind the U.S. vessels at extremely close range and high speeds, including multiple crossings of one ship, the Puller, with a 50-yard closest point of approach and within 10 yards of another ship, the Maui's, bow, a 5th Fleet statement said.

No, this doesn't belong in the WW3 forum. Get a grip.

Still, things could get very serious.

This is on top of already heightened tension:

Also, earlier this month, the president sent a stark warning to Iran, after claiming that Iran was planning a “sneak attack” on U.S. troops in Iraq.

"Upon information and belief, Iran or its proxies are planning a sneak attack on U.S. troops and/or assets in Iraq. If this happens, Iran will pay a very heavy price, indeed!" Trump tweeted.

I still think it's the right move. We've been letting ships and planes # with our people for years. It's only a matter of time before there's a serious accident that costs the lives of our servicemembers.

I'm all for heading that off.

The usual suspects will whine about how Trump is about to get us into a war.

I'll remind you these same people have been consistently wrong about everything. We hit Syria twice and gave Iran a black eye earlier this year, and there was a loud houl of ZOMG WW3!!!!1!!1

I would think that would be the standing order since the uss Cole.

And a people gets gunned down so why not shot down?

He was probably thinking about drones being shot down too.
edit on 22-4-2020 by Bluntone22 because: (no reason given)

Good. "Don't fire until fired upon" never turns out good for the guys protecting us and I've always hated it. When someone screws with us, terminate them immediately. It's about damn time we started showing who has the bigger balls. When it comes to us or them, it should be them every time. Stop giving them the first shot.

I don't have a single issue with "shooting down" the gun boats, nor the words used. Actions speak louder than words.

posted on Apr, 22 2020 @ 02:38 PM
link
Saw the video it looked like thy had some nice yachts out there harassing the ships. Plastic burns really well.

Well, you need to have wars, it takes the focus off how inept the administration has been in regard to recent events.

what's wrong with a sovereign nation monitoring a military exercise being conducted just outside it's coastal border?
edit on 22-4-2020 by subfab because: edit for clarity

posted on Apr, 22 2020 @ 02:56 PM
link
Their Navy reminds me of boat chase scenes in James Bond from the 70's. Hollywood should upgrade them to those alligator submarines in Octapussy.

Sure, the US has had involvement in more wars that any other country in modern history, perhaps even in all of history, and well before Trump.

But all governments in all countries have used the same 'bait and switch' attention trick at some time or other.

When Margaret Thatcher was facing defeat in an upcoming election the 1982 Falklands war turned her fortunes , there is a precedent for manufactured wars of convenience.


They put that warning out there, but our guys will fire warning shots first.

Do you honestly believe anyone thinks a war with Iran would get trump reelected?

If anything a war would hurt his chances.

But I agree with the poster above, there's nothing wrong with them checking out what's going on just outside of their own waters. Not enough to sink anyone anyway. 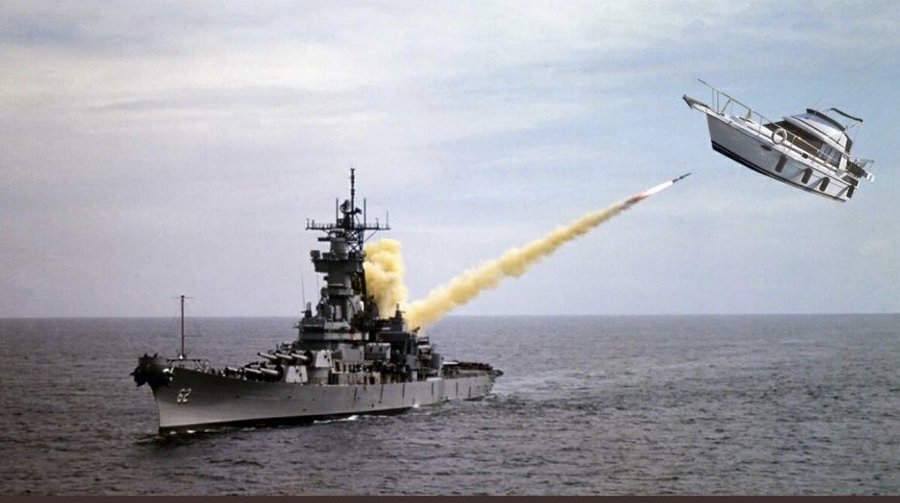 Iran had to go to speedboats after we destroyed half their Navy during Operation Praying Mantis.

This time, if Iran acts stupidly again, we will finish the Job.

I want to see the Iranian Captain who is going to test out if the USN means business. "Let's play who wants to be a Martyr?".

Raising of tensions won't end well for the Mullahs. That's a prediction I'm willing to make.

You don't have fingers?