I could see that they want Trump to lose the election because they’re afraid of being prosecuted.

Are they ignoring the law of unintended consequences? If Trump loses the election I believe he will go to scorched Earth and blow it all up.

If Trump loses, then we'll just go back on track when Obama left office.

Unemployment will be higher, taxes will be higher, more people reliant on government, we'll be friends with China, we'll start more wars, and angry leftists will be able to legally hunt down anyone who doesn't think like them.


If Trump loses the election I believe he will go to scorched Earth and blow it all up.

Answer. You will have a new President.

If Trump loses re-election and a democrat gets in,
I'm bugging out!

Scorched Earth...The dems would do something like that,not Trump!
edit on 22-4-2020 by mamabeth because: (no reason given)

DBCowboy
+8 more
posted on Apr, 22 2020 @ 09:37 AM
link
Seriously though, if Trump loses and democrats take control of government, then it might be time to consider moving to a country that has fewer laws, more freedoms, a smaller government and fewer restrictions than the leftist version of government.

America gets a new President and Trump picks a new shade of orange.

America gets a new President and Trump picks a new shade of orange.


Did you see that picture where someone photoshopped his whole face to the color around his eyes, this whitish-yellow skin?
It was.. unexpected ugly.

On topic:
- The Impeached Idiot will whine and growl and tweet a lot about "scams" and "democrats" and so on, but will not leave decently.
- The next president will have a lot of crap to undo.


If Trump loses the election I believe he will go to scorched Earth and blow it all up.


He'll start by shooting down all the boats in the sky. 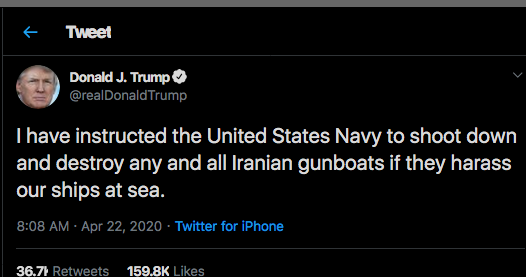 posted on Apr, 22 2020 @ 09:47 AM
link
The bottle of rum that's been sitting on my shelf unopened for months will become a very endangered species.

posted on Apr, 22 2020 @ 09:48 AM
link
If Trump loses the next election I’m thinking we will have a socialist paradise!
I was laid off because of the virus, I’ve always been a hardworking taxpayer but since I’ve collected some of this free “government “ money (lol) I’m starting to lean towards the government paying me money to stay home as long as I vote for a Democrat!
The one thing that should happen if Trump loses is that everyone, should get the same basic wage or free money, and an actual job would be optional.
No job would be judged more “important “or critical than another, fast food workers would get the same wage as a
doctor or lawyer.
The whole socialist agenda would be controlled by an elite group of wealthy politicians, billionaires, Hollywood actors and the MSM, they would be exempt from the socialist rules but would have complete power to dictate to the unwashed masses, any resistance would be met with the strong arm of the law and the military.

posted on Apr, 22 2020 @ 09:54 AM
link
Goodbye USA economy, hello deep state back on track controlling everything.

posted on Apr, 22 2020 @ 10:06 AM
link
I think we'll be going back to the way things were pre-2016. I'm not sure if the divisiveness will ever be put back in the bag now that it's at it's all time peak and possibly/probably shooting up a little higher over the virus stuff. While I'm not a Trump fan, I'm not a Biden fan either. I fully believe he's past his prime and will simply be a puppet for whoever can get their hand up his ass.

Either way, this country's political system needs to be torn down and started over again. I'm not a fan of either party and fully believe the government is out of control on both sides.

The only thing I really hope for is a unification of the people, I really don't care who is in office or how that's achieved. We're far too divided right now and it's not doing a single person any favors being this way, except politicians. We're working for them and not each other anymore.

Social credits will be the new method of voting. and posting online. But you can get social credits monthly based on your melanin rating.

ATS will be required to give equal time to opposing viewpoints.

Every conservative non-profit will have their taxes investigated.

polygamy will define the new family unit, with pedophila to follow. YOU will be outed as a hopeless bigot if you question it.

Gas will be 7 bucks.

You will be force to recycle with 5 different bins for each type of trash you produce. Your garbage will be metered.

Writing will be dropped from public school curriculums, and be replaced by two new skills: woke-ness and feels.

Just think of this as a good opportunity to explore a solution to how we can address the problems that will pop up more and more as automation takes over more and more jobs. Society will always have those "essential" workers", even though the majority might not be needed and be free to pursue their interests or creative urges, or sit on their butts and waste their lives away. How do we ensure that those non-essential people have their needs met while still rewarding the essential workers for showing up to work every day? Is just having a job enough of a reward? Should we just allow those deemed non-essential to be culled if they cant find a new economy where the majority of the necessary work is being done by machines and robots? Will it take covid to give us a push into this new way of life?

The Paris Green Accords will be rekindled.

Trade agreements go back to advantages of other countries.

The worst parts of Obama.Care come back.

U.S. dependency on foreign energy returns with a fury.

It's a valid question for the wrong reasons , it looks like Trump will lose the next election due to the virus are rather his poor response to it , poll numbers are dropping so will he delay the next election or take his chances and deal with the result when it comes.

Deep State conspiracy is just an excuse waiting to happen,

Just a question.. all those people demanding to work..
Why arent we seeing any of them in the fields harvesting the crops now that trump has not only made it more difficult for the migrant workers to come in?

Full disclosure of government corruption with names and numbers

Shut DC down and let the states run their own governments. The military can remain federal and control their department. It's a start. Politics will never be the same and will be polarized and divided until we have another Civil War or shut the feds down.