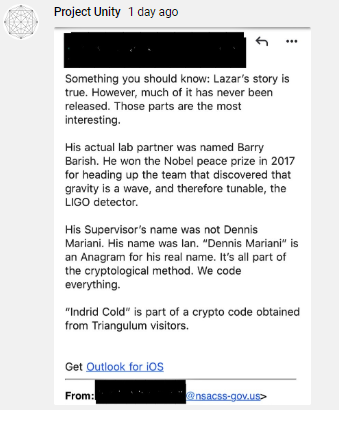 Barrish did win the Nobel Prize in Physics in 2017: www.britannica.com...

What is the source of this ? Project Unity ?
And who was the receiver ?
And why ?

hence the question above
edit on 20-4-2020 by ignorant_ape because: (no reason given)

Any idea why they threw in the Indrid Cold name? That seems totally unrelated.

BASSPLYR
+9 more
posted on Apr, 20 2020 @ 02:34 PM
link
Barry didnt discover that gravity is a wave he observed gravitational waves. Barry won a Nobel PHYSICS prize not peace prize. If this "researcher" cant get really basic facts straight i highly question the rest of his propoundings. Also barry barish was heavily invested in studying neutrinos and magnetic monopoles during the entire 80s. He wasnt a gravity guy back then. One day while going for a walk with a physicist friend in santa monica in the early 90s he was asked to take over the LIGO array proposal. It was an out of the blue proposal and a new direction in his life. Thats when he got into trying to observe gravitational waves. So the time frames in barry barish's life and bob lazar's supposed foray at area 51 dont match up at all. These are easy things this "researcher" could have looked up before making his cockamamie propoundings.

Another thing. Didn't the greys come from zeti reticulum not the triangulum. Triangulum is found in the northern skies near pisces and aries. Zeti reticulum is on the opposite side of everything in the southern skies near dorado and the large magellenic cloud. At least he didn't say they were from the Trapezium. I would've gone ape if he dared besmirch my beloved M42

originally posted by: Case74282
I say "possibly" as none of this is confirmed yet. Anyone have any additional detail on this?

No additional detail on that item. However I do have addition detail on Bob's story.

Unlike most members here, shortly after Bob spilled the beans on the evening news, I got off my duff and went out there in person to see if the story was true.

I was astounded to discover that it was indeed all true.

No plasma radar spoofing BS, no holograms, just plain old alien gravity propulsion flying saucers about 50 ft wide with astounding speeds and maneuvers. And these craft were right where and when Bob said they would be.

Since that time a lot of armchair experts have debated the story back and forth without ever having been there.

Fact of the matter is Bob Lazar is the biggest break UFOlogy ever had. Period.

Jesse Marcel comes a close 2nd but Bob has revealed the paradigm shift that humanity is in for once the news is officially confirmed.

You bet. I got plenty of video to document the event.

So don't take heed of armchair experts that never got off their duff to investigate.

Those who actually went out there have a very different tale to tell.

originally posted by: Case74282
Anyone have any additional detail on this?

After a bit of searching, I presume the screentshot above was obtained from a Reddit discussion at the link below:
www.reddit.com...

(The logo for that user matches the logo at the top of the screenshot, and the username matches as well).

More specifically, discussion of that user's Youtube post can be found in that Community channel at:
www.youtube.com...

It's worth having a look through that user's other posts.

In short, he seems to post a lot of incredible material (in the strict sense that they lack credibility...). I spotted at least 2 widely known misleading/hoaxed documents in his last 5 posts.

Of course, that doesn't in itself mean that his latest post is nonsense - but it does give a reason for caution.

originally posted by: ignorant_ape
a reply to: Case74282

Full name would be ian de-mirrannis...least if I'm doing this correctly. I'll Google the name and see what pops up.

I googled that name ian de mirannis with no luck....maybe I'm doing it wrong. Darned anagrams

Yeah i checked out his page too. Typical ufo enthusiast collecting ufo folklore and whatever soup of videos he can find on the internet without doing any actual research or critical thinking. Hes got a couple of doozies in there. La violette and the easily debunkable CIA agent deathbed confessional about his visits to s4.

Already have. Just click on the link in my signature.

It's a hair brained idea started here on ATS to try and explain the the amazing sightings people had at Area 51 in the early days. 1990 - 92 was basically the window of opportunity to see real gravity propulsion craft there.

Just search ATS for radar plasma spoofing to find the threads on it.

I've never heard about it before. Wondering what plasma spoofing looks like? People on ats sure do get a lot of crazy ideas