Nancy pledges to fight trumps illegal defunding of WHO.

Of course her first sentence is predictable because it’s the same crap she’s been saying since January every time she gets behind a podium or sees a camera.

She must have this tattooed under her eyelids.

Sadly, as he has since Day One, the President is ignoring global health experts, disregarding science and undermining the heroes fighting on the frontline, at great risk to the lives and livelihoods of Americans and people around the world,” Mrs. Pelosi, California Democrat, said in a statement Tuesday.

While she has all of her constituents hearts pitter patting. With those stern ‘heartfelt’ remarks.

She slides in a bold face lie.

“This decision is dangerous, illegal and will be swiftly challenged,” she added.

No it is not illegal.

Contributions to the world health organization are voluntary that’s how we’ve done it since 1948. But they are headquartered in Switzerland which makes it a international negotiation. I can’t find any self-executing or non-executing presidential agreements or treaties on the issue. Which is a moot point because none of those supersede the constitution which is where Trump draws his power.

The President of the United States has sole authority to negotiate ALL foreign matters . Congress and therefore US law have no effect internationally. Nor does it matter who holds the purse strings . Treaties of cooperation can be made but again the president has sole power over those treaties .

That’s it plain and simple if Trump wants to fire them he can. ( I like that analogy)

Then this is how the shysters deal from the bottom of the deck while tag teaming you.

A top aide for Democratic Rep. Nita Lowey, House Appropriations Committee chairwoman, said the president does not have the “unilateral authority” to cut funding, comparing it to the controversial hold on military aid for Ukraine that ultimately led to the last year’s impeachment proceedings.

Again yes he does have unilateral authority on international matters.

As for mentioning Ukraine they must be planning on going back to the dry well. And picking up the “GAO said he broke the law in Ukraine”. If that was the case he would’ve been impeached and so would’ve Obama because the GAO cited him with seven violations.

The infraction Trump supposedly committed fell under the impound act of 1974. That in my opinion under international law is null void because of the case law from the Wright Curtis Supreme Court decision in 1936.

He didn’t properly notify Congress was the accused violation. That’s a I he dotted right away this time. When stating his decision is under review. The funds have to be held by Congress for 45 days before they can be permanently rescinded.

If you guys want to check me. This is the best source gives explanation insights all of the caselaw.

Treaty law
If my cynicism seemed a bit strong.

I think Nancy Pelosi now has eight or nine anti Trump pledges to work on, if she ever gets up the nerve to leave that Resort in Hawaii and return to Washington again.

PorteurDeMort
+41 more
posted on Apr, 15 2020 @ 01:38 PM
link
I saw Bill Gates crying about this too. Trump is withholding 500 million from the WHO. IF Gates is so concerned why doesn't he just donate it out of his 104 billion dollar net worth?

Let her stay in Hawaii we get two chances there. Volcano or tsunami.

We’ve just got to figure out a way to warn the other 2 million people .

Let her stay in Hawaii we get two chances there. Volcano or tsunami.

We’ve just got to figure out a way to warn the other 2 million people .


How about she is between the last box and TP and a 350 pound Samoan...

She might unhinge her jaw and swallow him whole .

They've all jumped the shark.

I’d be for that if they took the checks down in the southern border. Then dangled them on the other side of the wall .

Does anybody remember the members name that did the rant about threads with not enough substance ?

Notice how Nancy got herself squirreled away for the lock down to a relatively safe and secure place. Did she travel there legally?

Are her other residence empty? Perhaps she would like to donate them to the homeless?

Well are really surprised that Nancy Pelosi would defend Communists?

mtnshredder
+3 more
posted on Apr, 15 2020 @ 02:00 PM
link
More senseless bickering from the hypocritical party of whiners. Not much to say other than to express my dislike for the dumb worthless #@$%. This women is so disconnected to reality it's scary. Why she doesn't do something productive like helping the homeless and cleaning up the needles and feces off her own streets is beyond me, apparently there's no profit in it for her and her cronies.

The dim's really have nothing better to do than to wait for Trump to say black so they can say white on cue.

Her soul is so black she could leave fingerprints on charcoal .

Now.. Ive thought this for years, so its absolutely a bias.. But I think a lot of these folks intend to kneecap the western world.

Im not entirely sure whats in it for them, but Id imagine anything from money to Epstein-style blackmail. Maybe both (if you comply, you get lotsa money! if you dont, we wreck your life!)

Strictly from the standpoint of the virus, Im not at all convinced we are doing the right things.

We see things like so many being thoroughly convinced that the economy just means "money." It is so, so much more. With currency only being a near meaningless middleman for what the "economy" really represents.

Nearly every public organization (WHO, UN, etc) down to individual politicians (Pelosi, ClintonS, etc) use peoples ideals to lead them by the nose. As long as they never actually work towards those ideals, they can just keep doing the same thing.

Then, just vilify anyone who disagrees or questions as someone who hates the ideal, rather than the frequently counterproductive or impotent actions taken to supposedly achieve their marketing mumbo-jumbo.

originally posted by: Willtell
Trump's looking for scapegoats for his own failures.

originally posted by: Fallingdown
a reply to: seeker1963

Her soul is so black she could leave fingerprints on charcoal .

Well since she supports the WHO, who support Communism, Tedros a communist and since the CCP is not only racist and advancing colonialism, the WHO denies allowing Taiwan in and doesn't recognize them as a country, I guess it's cool to call the Democrats colonialist and communist.

The comedy in this is gold for those better than I at writing my thoughts down!

They haven’t been shy about letting everyone know their goal. They want a liberal global utopia where everybody’s equal. All races and creeds holding hands because of equal distribution of wealth. Except for them they’ll keep their wealth and achieve the main goal of power .

The easiest way to rebuild something is to tear it down first. That’s been the plan with global warming and phasing out fossil fuels it would destroy the world economy .

But hey this just plopped down in their lap . Ever the opportunist they’re more than happy to exploit this too. They’ve just got to get used to the climb.

They are already use to standing atop piles of babies bodies to try and get our guns .

This is just a bigger pile to try for the whole shebang .

The Democratic leadership and trust me they aren’t liberal .

Want a Stepford wives version of the world with them being the husbands . 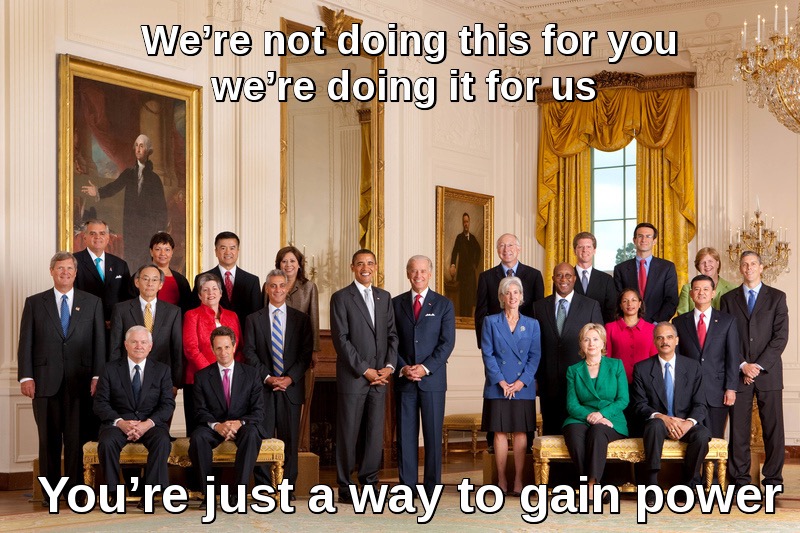 posted on Apr, 15 2020 @ 02:35 PM
link
It’s gonna be great to see when other world leaders follow suit and defund the irrelevant WHO

originally posted by: Willtell
Trump's looking for scapegoats for his own failures.


What failures are you speaking of?
Another hit and run post by the one of the top 5 deranged Leftist cult members on ATS.