posted on Apr, 13 2020 @ 05:53 AM
link
The Russian Foreign Ministry reacted to the congratulations of the US State Department on April 12. In Russia, Cosmonautics Day is celebrated on this day, while in the rest of the world it is International Day of Human Space Flight. 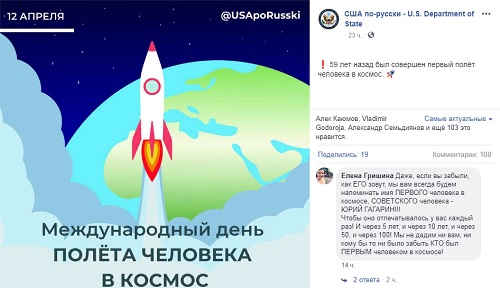 On the Russian State Department’s Facebook page on Facebook, the greeting card is provided with a comment that 59 years ago, the first manned flight into space was completed. Our Foreign Ministry, also through Facebook, reminded colleagues: the first person in space was the Soviet cosmonaut Yuri Gagarin. 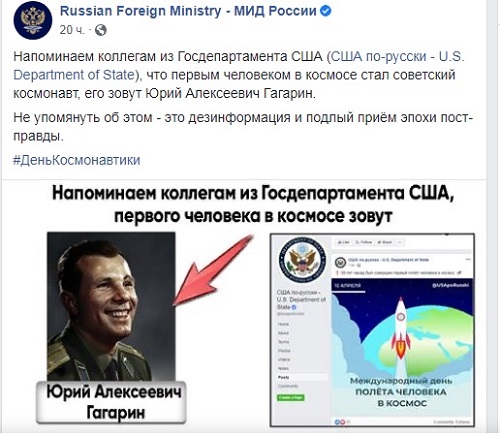 "Not to mention this - this is misinformation and a vile reception of the post-truth era," noted on Smolenskaya Square.

59 years ago, the Vostok launch vehicle launched the Vostok-1 spacecraft into orbit, on board of which was Yuri Gagarin. Having completed one revolution around the Earth, at the 108th minute the flight was completed, landing took place in the Saratov region. At the start, Gagarin uttered the subsequently famous phrase "Let's go!" This year, Cosmonautics Day celebrations are held remotely.

The head of Roscosmos Dmitry Rogozin on his Twitter, not without sarcasm, forged the US State Department and made him a warning.

"Space without Gagarin, World War I without the Russian army, Berlin 45th without Soviet flags, Mendeleev’s table without Mendeleev ... Attempts to erase the Russian footprint in world history will not deprive us of memory, but of those overseas dirty tricks who do this," Rogozin warned.

posted on Apr, 13 2020 @ 06:17 AM
link
Either there's a language barrier issue where something isn't translating, or I'm nowhere near awake enough yet this morning, but either way, I'm at a loss for what the controversy is? If it's over Gagarin, even the everyday American Idiot understands his place in history and has a healthy respect for his contribution to orbital/space science.

posted on Apr, 13 2020 @ 06:23 AM
link
So, the Russians are mad because Gagarin wasn't mentioned by name ?
That's like someone wishing me Happy Birthday and I get offended because they didn't say Happy Birthday David

Sorry my friend. With all due respect, but you are not Yuri Gagarin

It turns out that only idiots are sitting in the US State Department? I doubt it.
In this case, this is either complete unprofessionalism, or primitive propaganda

59th anaversaries - are not a major milestone

Can you cite Russia's official reaction to this event to prove your words?

You know, in Russia, what you wrote is called "the fool himself"

Do you prefer rockets to fly in response? Would that be a big scandal?

But this is very bad. Because it excites us Russians. And the State Department, in its "unrest", can imperceptibly approach the red line that Putin had long warned

with all due respect the U.S. could have just ignored it all together.
but the U.S. did acknowledge that yes the USSR was the first, (it wasn't the Russian Federation) which isn't scandalous. but like a bunch of little low life whinny babies called foul cause they didn't use a man's name.

Do you prefer rockets to fly in response? Would that be a big scandal?

Hey if they're headed to space I'm all for them! Not big on the ones that come back down and destroy cities though.

For us, it does not matter what our country was called at different time periods, the Russian Empire, the Soviet Union or the Russian Federation. All this is Russia

We see how already at the state level the distortion of history, the destruction of the very concept of “Russians” and “Russia”, the deletion of Russia from the concept of “civilized state” is underway.
For example, more than half of Japanese schoolchildren believe that the Russians bombed Hiroshima and Nagasaki. Therefore, our reaction will be like this. Moreover, the farther, the tougher.

About the "civilized state":

Many years ago, anthropologist Margaret Mead asked students what they consider to be the first sign of civilization. Students expected Mead to talk about fishing hooks, clay pots, or processed stones.

But no. Mead said that the first sign of civilization in ancient culture is the femur, which was broken and then fused. Mead explained that if a living creature in the animal kingdom breaks a leg, then it dies. With a broken leg, it cannot escape from danger, get to the river to get drunk or hunt for food. It becomes prey for predators, as the bone grows together for quite some time.

“The thigh bone that was broken and then fused is proof that someone took the time to stay with the one who received this damage, bandaged his wounds, transferred the person to a safe place and guarded him until he recovered. Helping another person during a difficult period is the act that civilization begins with, "Mead said.

Let's see what is happening in connection with the coronovirus with medicine in the USA, Western Europe and in Russia. And who now most falls under the definition of "civilization"?

In this matter, my friend, we have complete agreement and harmony

what's all that got to do with not using a mans name that was part of one of the evilest governments of the world, which was far from civilized.
i would think that Russians who are proud to be a Russian Federation citizens, would be glad that a soviet reference wasn't used.

i guess many in Russia want the good ol days back like putin does.

And which of the two of us is a victim of primitive propaganda, my friend?
edit on 13-4-2020 by RussianTroll because: (no reason given)

I believe we all are.

it's not propaganda, it is a fact the USSR was the very epitome of evil above all nations.

it is a observation that there are some that would rather see that a representative of that governments name be used in a congratulations to the people that survived that government for that achievement. and that some would rather see that that the government that was not doing it because they wanted to be civilized, but because they wanted to beat who they perceived as their enemy to space trying and prove their superiority.

grow up bud and see things for what they were and are.