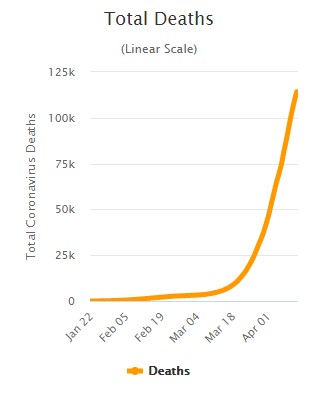 Above is a linear chart of total deaths worldwide from the coronavirus. It is the chart you will probably see on TV and in the media bc it’s conveniently shaped like the puppet masters bent arm at the elbow, vertical forearm and hand being shoved straight up your ass. Most data given to the public easily and free is based on this type of chart, even most of the stock market charts for trading.

This next chart is different. It uses logic and patterns to show total death by country. 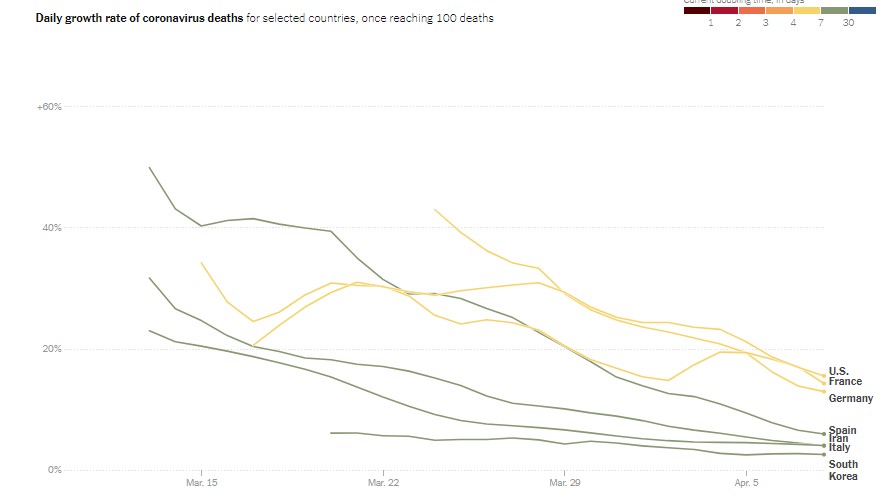 Here’s where we’re at. Right now we’re in the scene of the movie where the bullets are flying from every angle and your Captain is yelling for everyone to get there heads down and stay down in the foxhole!! Do not be that person that over thinks this moment, lifts there head, gets shot, and becomes the last person to die in a war. If you feel panicked, ask yourself did you or anyone you know starve today? Did you or anyone you know go thirsty without any water today? If not than you are as strong as you will ever need to be to get through this. Do you feel like you are anxious or depressed? Is that voice in your head telling you things to upset you or make you panic? Do you know what that voice is? That voice may sound familiar but you’re not controlling it.

That’s not you. That is the force that makes you want to lose your cool so they can take you out. That’s how fighters win. They keep their cool 😎 and patiently wait as they watch their opponents moves and patterns. Bc patterns are a sign of logic and not emotion. Once their patterns shift and become erratic and emotional. The fighter strikes at the opportunity and takes their target out. Do not lose your cool. Focus on your logic Only and nothing emotional that is in your mind and out of your control. Compartmentalize the moment you are in now. Stand still and take a deep breathe. Realize that worrying is literally the opposite of practicing faith. And if you are practicing the opposite of faith, where is that going to take you anyway?

What force would want you to worry and encourage you to practice the exact opposite of faith. Clear your mind bc anything stopping that from happening is not your logic helping you and is simply a test of your fate. When identifying an opposing force, titles mean nothing, only intent and action. Complexity is the heart of manipulation and the farthest thing from the simple truth even the most complicated problems have. Compartmentalize the moment you are in now. Stand still and take a deep breathe.

Soon the firing will cease and you will get your chance to lift your head higher than you ever have. And with all the energy you saved you will be mightier than you have ever been. And you will fly out of that foxhole like the rising Phoenix to storm the beach and find out wtf just happened and hold those responsible, accountable.

Here's my theory on this whole event. Its not as exciting as the ones out there, but its a simple truth for me. The Earth knows how to balance itself and stay in homeostasis on all levels, from physically to quantitatively and everything in between. If you believe in a higher power? The Earth was perfectly created to maintain its balance and we are obviously a part of that overall balancing act.

The biggest net result I am seeing from this event is the Earth is becoming healthier. Sure the Lemmings are being opportunistic of this event, but eventually Earths balance will prevail. Even when you try to spin the act to create more chaos and negative energy, Earth finds a way to maintain balance. I dont feel any form of manipulation is beyond the Earths abilities.

The Aztecs created a bloodthirsty and abusive empire. Their leaders creating imbalance liked to kill and control partly based on the Earth and Moons eclipses, bc they all kept staring at eclipses, everyone went blind and starved to death.

The Spanish Flu of 1918 was called that NOT bc it came from Spain. That flu killed 10's of millions of healthy people between the ages of 20-40 during World War 1. It got the name bc Spain was not in the war, so they were the only country fully reporting on the death tolls with free press, so everyone assumed the flu started there. it was spread by the soldiers worldwide. Earths gift for man going to war and creating imbalance.

After world war 1, the world became too greedy, the negative energy from greed was met with balance in the form of the depression and dust bowl, the negative energy influenced europe to ignored germanies need for help. Germany was broke, their Euro Nabes didnt help them, that selfishness created alot of negative energy, than that negative environment created hitler, then the Earth had to balance that mess out too.

I feel theres two types of energy in the universe that control most aspects of the reality we are all born to witness. Energy cannot be created or destroyed, simply moved, strengthened or weakened.

There's Negative energy, it makes things pull apart. The universe is expanding bc of this energy. Evil is nothing more than the manifestation of ripping something to shreds.

You can grow either energy, attract it and move it to you or away from you. And The Earth knows how to balance both of these energies so they are in equal amounts influencing upon The Earth. The markets dropped bc its a good way to hide theft, this flu was a planned excuse. They could have used the flu any year to do this, the timing was this year to avoid an economic bubble, which leads to investigations. So expect controlled economic drops until all the countries are out of debt, and the theft is well hidden or expect a world war to break out over the debt. Could go either way I feel when dealing with a den of thieves.

Father, give us courage to change what must be altered, serenity to accept what cannot be helped, and the insight to know the one from the other.

Most fights are won before the fight begins due to preparation and mentality.


Being prepared is not only taking care of yourself but also being ready to help others any way you can.

The mentality part is not succumbing to fear.