So what's for Easter Dinner?

But I'm not going to make a fish, or a chicken, or even a cheese really.

Nope, on this Easter Sunday I'm going to do something I've never done on Easter. I am going to make Chili. And, There's a reason, so pay attention...there might be a quiz.

You see, the other day I saw a video on YT, a video YT refuses to promote. It's a video from a guy in Nebraska who made some chili which won a chili contest in Wyoming. He won $100 dollars. Not a million, not even a thousand, just a hundred bucks, but that's not what's important here. What is important is the video. The video is a total of 1:36 long, yes, one minute and thirty-six seconds! It's direct, and it's to the point. There's no endless droning on and on to make the video 14-15 minutes long, just a video which says what it needs to say, only what it needs to say, and then it...ends! Absolutely ASTONISHING!!!

I am sick of Goo-Toober's who feel like they need to consume your bandwidth with a bunch of BS, ramble on ad-nauseum, and I was so impressed with this guy I am going to celebrate him, and his video...and make his chili. Just because I appreciate his brevity THAT much! It's AWESOME! And YT hates him! But I don't...and so today, in front of GAWD himself, I am going to make chili...his way...as an homage to SHORT VIDEOS on YT, may they live forever! Yeah, yeah, the longer the video the more clicks and the more money they make (everyone). Well, I say...NO! ENOUGH!!!

So we will make Rick's chili. Now, I don't know rick, never met him, but if I ever do I will surely buy him a beer (or six). I don't have any reason to believe Rick's chili is even all that fantastic, as I am a chili competitor from way back, but this is beside the point. Rick has done something important, something very important; he's broken the mold. Good for Rick! And so we will eat Rick's chili, just because.

I won't bore you with the recipe. No, I will do something far better. I will link the video for your absolute viewing enjoyment. One minute of 'to the point', 'no BS', 'nothing but the facts'...pure bliss.

I only ask one thing....please respond back how satisfying it is to watch a nice, short and direct video which tells you what you need to know without going into 15 minutes of family history, the history of the world and countless other useless BS and Gawd knows what else, for 1 minute of facts.

So, without further adieu....

P.S. Read the comments...there's more people out there like me!!

So, you're adding the kidney beans, then, yes??

'Cause we've had that talk. lol

As for me, I smoked a pork loin yesterday: 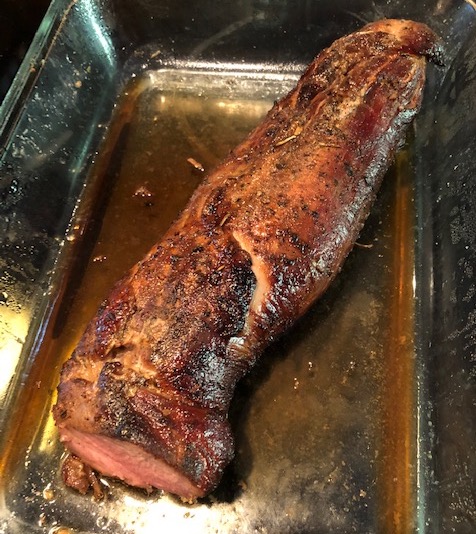 Because it's Easter, we're using ground lamb and ground pork in our meatballs. Then we'll have garlic toast with it. And for dessert the store was putting their coconut creme pies on sale. So we're having one of those. I am also baking strawberry thumbprint cookies at the moment.

Nothing earth shattering. The spaghetti and meatballs recipe makes enough to do leftovers all week and it reheats well, just gets better as you go in fact. So that's why we opted for it.

Too many beans for me though.

As for what's for Easter dinner?

It's called respect for a greater good...brevity.

Giant crab and shrimp boil was on the menu for us, corn, small red taters, kielbasa, onion and lots of garlic butter to help wash it all down.. oh and lots of lemons, can't forget the lemon! Having trouble typing this ugh.

It's called respect for a greater good...brevity.

I did see that post. That recipe is awfully similar to the one I linked to earlier, except for the T of cayenne (ouch!) and lime/vinegar.

posted on Apr, 12 2020 @ 05:15 PM
link
Damn that’s my recipe. (My grandmothers really)
Except for the green bell pepper.
She and my grandfather owned a diner decades ago.

posted on Apr, 12 2020 @ 05:18 PM
link
I can't even begin to tell you how much I appreciate brevity.
I float around an industry that literally relies on it.
Regarding youtube videos, I refuse to watch longer videos, because I don't have the desire to listen to personal ramblings when I came there to learn a simple something, so hats off to Mr. Chili. I will put it in my bookmarks and make it on a future occasion.

Oh, and, I had sardines.

It goes beyond just videos. Simple, basic, text-only (and maybe a couple pics) recipies subject one to pages and pages of people's memories from childhood, or their interpretation of how the smell of mustard seed is somehow reminiscent of the sound of seagulls on the Eastern Seaboard in September.

Supplies, Ingredients, how-to assemble, time & temp. Start with a 2-sentence about what it is.

posted on Apr, 12 2020 @ 05:36 PM
link
Shoot, tried to copy the picture I took of what I ate, but wasn’t able to do it. Anyway, I got curbside pickup at a local super club. Broasted chicken, mashed potatoes, stuffing, coleslaw, rolls, and green bean casserole, gravy too. It was absolutely delicious! I have enough leftovers for a week. It was just wonderful. Now I’m having some after dinner wine to cap it off.

I’m so grateful for everything I have.

But, tonight is Chili...done the BRIEF way!!

I'm not a Goo-Toober, but at least give the dudes some views...I'm not a member so I don't do "likes" and "subscribes", though, if I thought it would do some good, I would!

There's a link in the description... you don't even have to pause it!

Thanks much for your post, S&F. Now I’m thinking about chili. Will have to watch that video. I like short and sweet too.

I love the variety of things people have had today. Pretty awesome.

But, tonight is Chili...done the BRIEF way!!

Images or videos of you or any other guy making chili in BRIEFS, no thanks.

Gimme a hot female in boxers and we're in business, though.

And now the house smells SOOOOooooo good, even she wants some.

I'm not going to roll over on beans for chili, but just this once....we'll do it, and it looks smells like a really great recipe!

His key is adding the spices at the last minute. It's an interesting approach, but it seems to work.

I'm looking forward to it.

We had mine camp cooked, roast beef and mashed potatoes.
God awful but it filled the gut.

On the 3rd helping now.

With home made cake for pudding(s).

posted on Apr, 12 2020 @ 06:36 PM
link
Easter dinner was a little somber this year first time in decades we didn't try and get together as a whole family for Easter, the three of us here felt it too. Really first time we got kind of depressed since this BS started. But we planned well and had some traditional Easter fare with honey baked ham, green beans, mashed potatoes and gravy, deviled eggs, yeast rolls, and some pecan pie. Might be time to break out the Wild Turkey 101 later this evening...
edit on 12-4-2020 by putnam6 because: (no reason given)