Suspending his campaign may still be a play to keep it open long enough to see if Joe succumbs to the CV.
Plenty of rumors now that Biden is suffering from something.

originally posted by: IAMTAT
Looks like he's ready to admit Joe is the better man...

I don't like most of Bernie's platform... But the guy has been consistent, and his voting record has been in line with his toted policies.

Biden is a hack shill. The guy probably only tastes leather with all the bootlicking he does. It's even possible the polish he applied with his mouth is the reason he is brain is degenerating. 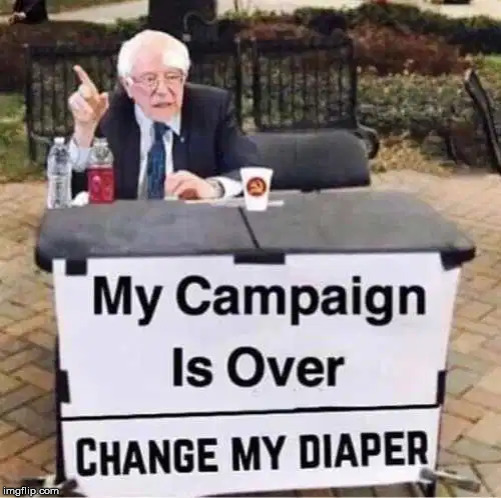 Joe Biden is the most Intellectually pathetic candidate I’ve ever seen...

He challenges voters to push up contests and cusses at them...

Also he’s Got the same personality and IQ as Gary Busey(post traumatic brain injury).....though joes was a stroke vs Gary’s motorcycle accident
The ends are the same

posted on Apr, 8 2020 @ 10:42 AM
link
Wonder who finally told him to get back to work and stop farting around. I can't wait to see the first pic of him getting back on commercial flights. Gotta suck going from chartered flights, primo meals and a big staff of servants to just being an average government slug again.

My sources inside the Bernie campaign tell me that he's looking forward to a retirement at his Dacha along the Ural Sea and spending a little time crushing freedoms on the side.

It will happen...Obama's endorsement I mean. Don't know about Bush.

And, don't underestimate the love the Democrats have for the Obama's. Barack Obama has almost twice the Facebook followers as Trump. I'd have to check on their Twitter stats, but I bet Obama beats Trump there too.

It will happen. And, don't underestimate the love the Democrats have for the Obama's.

I was saying I think Bush endorses Biden too.

The symbolism of Bush and Obama endorsing him will just be too rich for me.

I won't argue that dems love them some Obama. I just think it's hilarious that they do.


LOL...I'll bet Barry is really looking forward to that.


I was saying I think Bush endorses Biden too.

Yeah. I realized hat and fixed my response in the edit.

posted on Apr, 8 2020 @ 10:50 AM
link
My god I can’t wait to watch the debates...
Trump needs to find the gang with whom Biden almost rumbled....like he did with women raped by Clinton..
Must watch tv...
What’s that u say? Joe makes up all his stories....
Oh well, let’s keep our collective eyes open for corn pop and his gang...

posted on Apr, 8 2020 @ 10:50 AM
link
At least he could have waited until the convention to have his nomination stolen again.

Everything Obama touches turns to crap