Do you want to survive? Stay closer to the Russians

posted on Apr, 8 2020 @ 02:03 AM
link
Russian social networks circled a photograph of a suitcase with a memo that immediately became viral. The sticker indicates that in the case of a zombie apocalypse, you should stay close to Russian tourists, as this will help to survive. 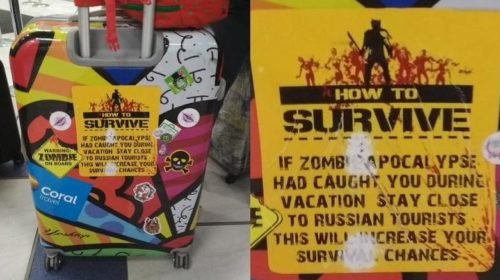 One of the famous Russian bloggers under the nickname "Gambit_Veprya" posted a post that became popular, in which, in an ironic form, he drew several historical parallels when this wish was really relevant. I offer you, dear members of the ATS, a free translation of this post made by the best friend of losers - Google translator.

"Tiflis, 1801. The young prince Bagration visits his father in the hospital.

- Listen to me, son. Yesterday, Russian Emperor Paul I signed the Manifesto on the annexation of Kartli-Kakheti to Russia. You know how many troubles have befallen our people in recent years - the countless raids of the Avars, the ruin of Tiflis by the Persians, the destruction of our people by the Turks. We must defend our freedom, save ourselves and our country. Therefore, stay close to the Russians.

- Tomorrow you are going to war. For almost five hundred years, the Ottomans have oppressed and tormented our people. And we had to endure it and somehow survive. Survive, so that once the time of liberation has come. And he is close, brother. Last week, a corps of Bulgarian militias was formed, which was honored to give the mortal battle to the Ottomans and, together with the troops of General Radetsky, to defeat the army of Wessel Pasha. Please keep close to the Russians.

- Alovtsy brothers! Yesterday, we were scattered detachments of the people's working militia, clap battalions, and units of the Union for the struggle of the young. But today we are one - we are the Army of Ludov. We are united in the struggle against the German invaders. Our task is to destroy highway and iron roads, blow up bridges, derail trains. Yesterday, the partisans of General Fedorov handed us assault rifles, ammunition, explosives, and medicines. In the near future they will give more. Therefore, if possible, stay closer to the Russians.

- Asbjörn, I ask you to be careful and vigilant, strictly follow all the rules and instructions. The base is located on an icy mountain range and there is constantly strong wind. Dress warmly. Everything is fine with food and uniform, but there can be problems with medicine. Know that in the neighborhood there is the Soviet base "Novolazarevskaya", on which the surgeon could remove the appendix himself! Remember this, stay close to the Russians.

Kunduz, 1982. Dekhkanin Abdulahad sends his daughter Jamil to study in the capital of Afghanistan.

- Take care of yourself, daughter. Study well, listen to the elders, listen to Uncle Bakhtiyar. My mother and I want you to become a good teacher. Now in Kabul, our new government, along with the Russians, has opened many educational institutions, there are many young people, students. But the people of the mountains still do not want peace to come. Do not forget about it, take care of yourself, stay closer to the Russians.

Delhi, 2004. The owner of Great Eastern Shipping, Mr. Kapoor, instructs the captain of a cargo ship heading for Europe.

- And be careful off the coast of Somalia. There were more cases of pirate attacks. Just yesterday, pirates attacked the Moneron tanker, which was transporting oil from Saudi Arabia to Kenya. Came up on motor boats and fired from machine guns and grenade launchers. Set constantly on duty. And best of all, go along the Gulf of Aden with someone paired up. Preferably with a warship. And if possible, stay close to the Russians.

Damascus, 2016. Housewife Azra escorts her husband, the captain of the Syrian army Farid.

- Darling, I hope this nightmare in Aleppo ends soon. Poor people! Why are they all this ?! So much trouble and misery, oh heaven! Do not worry about us with the children, everything will be fine with us. Tomorrow we will buy food and take it to grandma. We know that you will definitely break these shaitans, otherwise it cannot be! But I beg you, take care! Stay closer to the Russians".


Stay closer to the Russians. Thanks!