posted on Apr, 7 2020 @ 04:09 PM
link
I'm sure everyone is well aware of the touted climate change assertions and I'm sure also that everyone is aware of the "miracles of nature" such as dolphins returning to the canals of Venice and other such stories.

Now, today it has emerged that a study by the US Harvard University has concluded that air pollution is contributing to covid19 deaths and acute respiratory distress syndrome, and that even a single particle unit change in air pollution increases the death rate.
The Guardian

The North of Italy, the hardest hit area of the country, is the main industrial area and has had problems with smog for a long time. China as we know has always had horrific air quality as has Japan. China's pollution is down 25% as a result of the virus.

Results highlighted the need to keep enforcing existing air pollution regulations, and that failure to do so could potentially increase the Covid-19 death toll. They noted that the US Environmental Protection Agency suspended its enforcement of environmental laws on 26 March

Now we've all known for years about air pollution and respiratory illness, hence the reason we've stopped using coal powered power stations etc there have been hundreds of studies regarding air quality and illness done over the years, so why yet another? We know covid19 is a respiratory type illness I think most thinking humans would know that hanging around traffic fumes or a coal run factory wouldn't help their condition just like asthmatics so why would another "study" be necessary?

Today also sees the news that Oil Companies are collapsing due to lack of demand because of coronavirus, but Wind & Solar Companies are booming. Oil prices are sinking fast and now due to coronavirus, oil is stockpiling forcing companies to cut back on production and has caused a crash of many oil stocks. Some US oil companies are asking for tariffs on imported oil 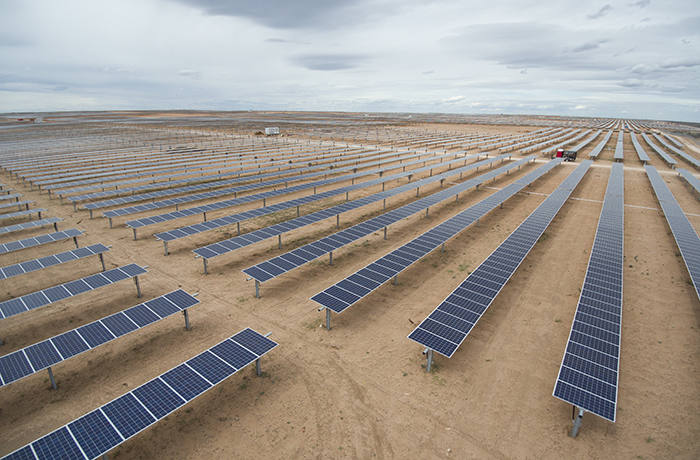 This global price/tarrif war mainly between Saudi Arabia and Russia, has caused oil producers in parts of the USA to fall to back up measures i.e. solar & wind power. Texas has paved the way for a big boom in solar power with an industrial size solar power farm across the Permian Basin. This boom being seen as a threat to fossil fuel reliant industries.
Solar Power Texas

You may be forgiven for thinking "well this is a great idea and a great step forward for the planet" except.....what if you discovered that the coronavirus pandemic was a cover for such nefarious dodgy dealing and pushing through of climate change agendas? This was a question put to me by a friend and got me thinking....long and hard. The reduction worldwide of flights and ground traffic is already being seen as a good thing and various EU Agencies are calling for ways to formulate a far more sustainable manufacturing process after the covid 19 ceases.


We can be pleased that the environmental and air pollution caused by excessive capitalist production is decreasing as a side-effect of the epidemic. This experience can serve as an inspiration for creating a world based on a fairer distribution of property and goods, with the aim of ensuring the livelihood of the inhabitants of our planet in a sustainable manner.

Der Spiegel Germany says:-
Global Warming is a much bigger threat (than coronavirus)

The further away the presumed consequences of inaction seem to be - both in time and space - the less willing we humans are to change our behaviour. ... So our long-known cognitive distortions make the one thing seem more threatening than the other. In spite of the fact that from a global and human-historical perspective precisely the opposite is the case: the climate crisis and species extinction are far more threatening to humanity than one more viral disease, however threatening and potentially fatal this disease may be. ... It is the task of politicians to draw the necessary conclusions from these facts. And also to finally take action against the climate crisis

Now I'm not willing to say that this pandemic was created for the sole purpose of saving the planet, but I have some serious doubts that after this first (possibly of many) lockdown is lifted, life will NOT go back to how it was. There is the overwhelming possibility that many people may never return to work in the sense they did before but as it appears many jobs can be done from home, perhaps that will become the norm? Savings costs and of course reducing air pollution from transport. Some cruise lines are in danger of going under already, so one outcome of this could be that cruising and all its inherent pollution also stops. Perhaps globally health services will drastically improve and be appreciated far more than some were. Maybe countries such as the USA would see a reduction in the number of tropical cyclones hurricanes and other climate disasters?

Clearly, from what I have read and researched, many agencies are certainly using this pandemic for their own platforms....but maybe that's a good idea? Maybe it IS time for society to change??

edit on 7-4-2020 by PhyllidaDavenport because: (no reason given)

Local industries can still produce but they must limit the levels of pollution they put out. For the most part, in the US, companies comply with EPA guidelines.

The current situation due to COVID-19 is just not sustainable. It isn't a solution to climate change but it does show that there are things that can be achieved which do have an impact.

posted on Apr, 7 2020 @ 04:31 PM
link
I believe the climate change alarmists are realizing just how irrelevant they are in the face of a real threat instead of "We all could possibly maybe be dead in 10- 100 years".

posted on Apr, 7 2020 @ 04:33 PM
link
They are both linked if you read the articles and various studies and many more online. I'm a little surprised you don't know this to be honest. I'd have thought it was common sense and everyone knew that but maybe that's my fault

originally posted by: Flatcoat
I believe the climate change alarmists are realizing just how irrelevant they are in the face of a real threat instead of "We all could possibly maybe be dead in 10- 100 years".

ETA. I'm not talking about air pollution of course. Any reduction is a good thing.

posted on Apr, 7 2020 @ 04:35 PM
link
There could be a bit of that irrelevance I suppose but the evidence is actually there and pretty hard to deny now whether its sustainable as Chronaut suggests is another matter, but maybe its one that should be looked at.

Yes, but those differences are in air and water quality which is a totally different thing.

posted on Apr, 7 2020 @ 04:45 PM
link
Sorry I'm not with you...how is a difference in air & water quality not contributing towards the environment and assisting climate change? Its related to the reasons BEHIND the reasons for poor air quality and water etc. CO2 emissions for a start

originally posted by: PhyllidaDavenport
They are both linked if you read the articles and various studies and many more online. I'm a little surprised you don't know this to be honest. I'd have thought it was common sense and everyone knew that but maybe that's my fault


Most EPA air quality standards are more concerned about local particulate sizes and respective volumes rather than how they may affect overall climate.

For example, a smoggy morning in a coastal area may be indistinguishable from a natural fog, in terms of climate impact. But in terms of air quality, smog is way worse. Similarly, suspended particles in the air may have similar reflectivity and absorption values to natural phenomena, and may not have an effect on 'greenhouse' temperature variation.

There is a link between pollutants and climate, but most pollutants have little effect on climate but a massive effect on air quality and this reflects in respiratory disease statistics.

posted on Apr, 7 2020 @ 04:57 PM
link
The questions I posed were relating to societal change and whether global warming climate change & the environment could maintain or improve on the scenarios we are seeing now with cleaner air etc and whether corona is being used to further the Environmentalist agenda with their recent study on air quality.

I am 100% for a clean environment....I'm sure any sane person is..but the climate change alarmists have latched onto CO2 as the enemy. There are many nasty things that come out of a chimney or a cars exhaust pipe, but CO2's not one of them. It's a very important gas, essential for all life on the planet. No CO2, no life. And it's works incrementally. Less CO2, less life, and conversely, more CO2, more life. NASA has shown that the planet has greened around 14% in the last couple of decades because of the higher levels of CO2...and I'm all for more greenery......

posted on Apr, 7 2020 @ 05:08 PM
link
I agree
It does seem like covid 19 is being used as a convenient bullet point by some activists but as there IS evidence of cleaner air cleaner seas and rivers etc could this not be a good thing and could we as a society actually bring about that change in reality? And of course make drastic changes to our manufacturing and commercial industries to make it sustainable? Would we even accept higher prices for more environmentally friendly products of higher quality than the disposable rubbish currently being imported from China? We have all become used to poor quality throw away goods, which again just add to the mountain of garbage piling up around the globe

originally posted by: PhyllidaDavenport
The questions I posed were relating to societal change and whether global warming climate change & the environment could maintain or improve on the scenarios we are seeing now with cleaner air etc and whether corona is being used to further the Environmentalist agenda with their recent study on air quality.

Let me clarify. We were already in hock up to our eyeballs. After this episode, we may very well be in the worst shape ever. It seems like all of the big environmental plans they put forward, cost tons of money, that we especially don't have now. The planet needs China to get caught up with pollution control. I live in California, and its my understanding that their pollution blows our way.

posted on Apr, 7 2020 @ 05:58 PM
link
I have to wonder though if after this "experiment" some jobs may well be relocated to being done from home. Seems for many its been quite successful and I've no doubt that if that were the case, salaries would be reduced but if business costs reduced then perhaps consumer products & services would also be reduced in price?
Probably just wishful thinking there
a reply to: visitedbythem