CDC Director: Coronavirus Death Toll Will Be ‘Much, Much, Much Lower’ than Projected

That is the answer for your maths. That still isn't what the CDC is using (they won't have a solid number until it is all over) or the cases/deaths resolved at this moment (my calcs)
edit on 8-4-2020 by daskakik because: (no reason given)

That is the answer for your maths. That still isn't what the CDC is using or the cases/deaths resolved at this moment (my calcs)


"Your calcs" are garbage.

I had covid and it lasted for 4 days.

Your calcs are not the same used by the CDC. And you couldn't even get the result right.

posted on Apr, 8 2020 @ 03:05 PM
link
We had a significant spike in deaths today. While New York may have peaked in terms of cases and deaths, the rest of the country has not. I still expect at least 50,000 deaths by the end of the year, more if the lockdown are lifted too early. 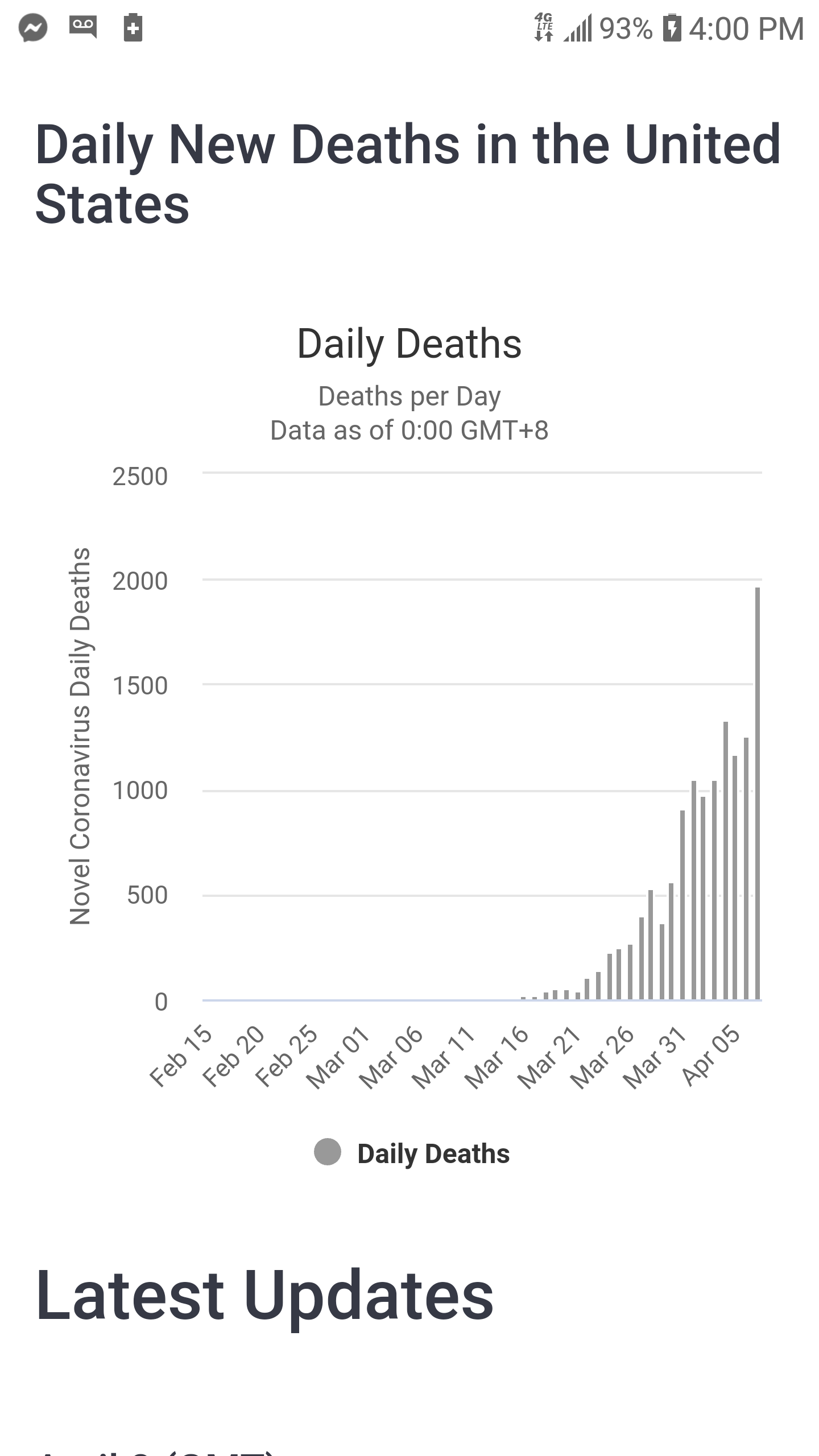 Come on? What kind of math you got?

I wonder how coronavirus will rank among all causes of all deaths in America, if it reaches 50000 over a 12-month period?

posted on Apr, 8 2020 @ 03:56 PM
link
The absurdity of all of this is beyond my ability to express at the moment.. neither verbally nor keyboardly

Your calcs are not the same used by the CDC. And you couldn't even get the result right.


originally posted by: asabuvsobelow
Should I make a wall of shame?

It will get pulled.

Just go into the threads that the hysterics made their claims and ask them what they think now.


Right I will just leave it alone, It is a Bad idea any ways I am for sure over stepping with this thought.

You are quite right.

I am an informed conspiracy theorist. I cannot help but think that all this mind-bending we've been put through for the last few months is somehow, some way, a staged event, some sort of grand training exercise gone amok.


That's fair enough for sure. But I personally believe that the social distancing is doing little to curtail anything, and that most cases that are spiking since lockdown were already in existence.

posted on Apr, 8 2020 @ 06:48 PM
link
I would wager Trump had a Sword of Damocles hanging over him if he chose "the numbers are fake" and he would be in jail or something major bad would have happened.

POTUS has to show us the system is rigged by their deeds. It is not enough in this environment to just tell us the game is rigged here too and then try to stop it with no one on board.

At least you have to go along until enough of us wake the hell up! Then POTUS can pounce with the freshness of their treachery in the public's mind. This information will be ready for prime time real soon and will be easier for the public to absorb than vampires or whatever they are taking freshly harvested adrenochrome.

originally posted by: shawmanfromny
a reply to: olaru12

I was saying this was overblown last month, long before it was cool for those sites to do it.

Only ones claiming Corona is overblown are trash blog tabloids(such as Thegatewaypundit) with an annual budget of 1000$. The same trash blogs you were so found of slandering

Really, then I guess your discounting this fact.
Stanford School of Medicine

Oh, there were people fapping away in my 'Big Government Shills' thread telling me the mountain of corpses was right around the corner and that I was a heartless bastard.

They were correct on one of those points.


I don't know. I cant believe you're truly heartless. I think you just play someone who is on ATS because some people can't handle the truth as it hurts their feelings.

It's not my willingness or not. I'd be tilting at windmills. There's no one to fight. How can I take on my state or the feds? Where would I even start? I'm just one guy, I can't do squat and I'm really tired of being called out about something I had no control over.

Still no answer from the person I asked the question. I wonder if I'll ever get one.

I wasn't trying to call you out on anything. My apologies if it came across that way.

My answer is that people with families aren't revolutionaries, rebels, or whatever people want to call them. At least they shouldn't be. A person with a family, and by this I mean those with children, should have their children as their priority.

For others, you congregate. Break rules, march right up to the states' capitols and federal capitol. Shout, break the doors down, get arrested, fill the jails to the point that no more can fit. Drag the assholes out into the streets, tie em up. Paint em up, scare em. Remind them that the masses still have power.

It's not civil, but that's the non-violent way.

Of course all it takes is one shot and # really starts off.


I wouldn't stress it though nothings going to happen. At least I seriously doubt it.

It takes more than just an individual or a couple of individuals to have have effect and not simoly be labelled a domestic terrorist or nutcase.

You gotta have a pretty large portion of the population doing a whole lot more than just getting pissy and sharing memes on Twitter.

Just take care of yourself and your family. Live your life how you want, and don't tell anyone how you live your life.

originally posted by: asabuvsobelow
OK I have a small list of ATS members who constantly spouted fear and media propaganda , in-particular they constantly repeated the death count.

In short they bought into this " Pandemic " hook line and sinker . Saying the deaths could be into the 100's of thousands even millions .


Now I want to make new topic and call it the "wall of shame" , but I'm almost sure if I do I will be banned almost instantly so I wanted to see what other memebers thought ?? Should I make a wall of shame?

Number one rule for any conspiracy/critical thinker:

Keep lists private, and whatever you do don't label it! lmao

I'll be honest. I've got some mental lists where I keep track of who stands where on various topics. It's the only way I can see if someone is being consistent or just talking out of their ass.

It's a very nuanced thing.

I wouldn't bother posting an OP on it, it's not necessarily doxxing, but people tend to know who spouts what BS.

But hey do it if you want to lol. Worst thing that happens is it gets removed.

posted on Apr, 8 2020 @ 10:32 PM
link
Why does no one see that the virus already spread to most everyone and virus require space suits to avoid them?

You would have to believe the virus can't spread like wildfire to think any measures other then NEVER going out without a space suit would suffice.

In fact I doubt it would ever in a million years work. Everyone gets CV19 one way or another it is how virus' survive, not by killing the hosts like Ebola. This is about how we address the next one that comes along while still being "askeered like little babies" paraphrasing.


originally posted by: Phage
a reply to: shawmanfromny


Our economy is tanked.
Spending bills now top 6 trillion by some estimates.
Millions sheltering in homes.
Neighbors spying and snitching on neighbors.

This fall, the virus will erupt again, we won't have a vaccine and the go-to response is going to be to destroy the economy again, spend even more money, re-introduce police-state tactics about social distancing.

Of course by 2022 when a vaccine is created, it'll only be 15% effective, yet everyone will line up to get the shot because the government and media has socially engineered such a fear response that at a sound of a cough or sneeze, people will literally be crapping themselves.


originally posted by: Xtrozero
It IS much more transmittable than the typical flu...

Is it? Or is it the same as other strains with the exception that this is a new one?