Isn't silver supposed to effect werewolves not vampires? Perhaps it's both, but either way, I think that those are literary additions and should be taken with a pinch of salt. There are a great many superstitions surrounding mining in general for the obvious reason that it has always been very dangerous work, potentially. There are even more when it is metallic ores being mined because of the ancient belief that metals were considered to be the body of a fallen god, or the off-spring. Those beliefs extend to metal working too. From extraction to finished product, sacredness was integrated into the process. During the 19th century when folkloreists began systematically collecting stories, it was usual for coal mines to have been founded due to the revelations of a white haired man, perhaps Time himself. Inthe classical world Nereids similarly appeared as guides. It was the Greeks I think that 'firmed' up the anthropomorphization of the natural world, and started dictating that everything must have a humanoid form. The uglier that form, the closer it was to the underworld; beauty came from above, but wisdom from below.

Iron (and it's ores) has a sacredness all it's own, quite seperate and distinct from all the other metals. Our relationship with it goes back about 300,000 years and from at least 100,000 years ago we were not only mining it but transforming its properties with fire and processing it into a number of utilitarian products including the pigments that we painted the caves, and ourselves, with. It was only about 4000 years ago that we discovered that we could extract metal from the ores, and that secret was closely guarded for several lifetimes before the cat was let out of the bag. Before that, it appears that the 'new' metal was assumed to be 'metal from the sky' or 'star metal' from iron meteorites. This iron was widely associated with both shaman-hood and later priest-hood and kingship - almost exclusively. It came from heaven afterall. Around the third millennia, iron was more valueable than gold both because of it's sacredness (body of the sky god) and because of it's rarity. That it's use was initally limited to 'magical' personage only increased that 'specialiness'. Beyond that, I don't think amulets do much more than create a psychological comfort or protection, but I could be wrong, however it all seems to rely on what we believe in rather than any demonstrable effect.

Iron ores themselves are pretty well dispersed and abundant. If that alone provided an answer I think we would have been able to quite easily demonstrate that by now. It could be a factor though but as could any number of things. Open cast mines and large structures in otherwise well vegetated areas can act as heat sinks which, at night, can create microclimates. Depending upon the temperature and humidity differentials, such conditions can create heat plumes that micro-organisms, as well as their predators, can utilise to rise high into the atmosphere. They can also create conditions, particularly in areas sheltered by cliffs and mountains, suitable for rare light phenomenon. Aditionally, there is the possibility that Telluric currents play a role. The Hudson Valley seems to offer the potential for a number of possible 'natural' explanations. And, I shouldn't forget, gases escaping from old mines or fissures, which ties into the 'dangerous' things that might not be visible but may stir some deep seated recognition in our brains that makes such a danger visible so we can be guided away.

Lots of options to play with.

Another one of her interviews found in this post mate and do think she makes some excellent points - am a big fan.

Also some tales of indigenous Alaskan Indians in the vid below describing little people who live underground (or inside mountains).

i watched all her vids and she HAS to be a member here.

Well said mate and it really is pretty freaky how globes (or orbs) of light do seem inextricably connected to pretty much every aspect of the 'paranormal' - fascinating stuff.

posted on Jun, 18 2020 @ 01:24 AM
link
I think stuff like this is the future of anomalous phenomena research—seeing the connections between seemingly different types of paranormal events.

One thing to remember is that our brains interpret reality in the same way that we see images in a Rorschach blot. We overlay conceptual frameworks onto our raw perception of reality—which would be meaningless to us without such concepts.

What would we perceive if we were to encounter some phenomenon which was so unexpected, so unlike anything in our previous experience, and so impossible based on our current understanding of reality, that there was no way for our brain to filter and interpret that perception in a reliable way? Perhaps we would see angels, gnomes, or aliens—whatever is filed under "the impossible Other" in our minds.

If this is true, perhaps Vallee was onto something when he began to study the ways in which UFOs seem to manipulate and interact with human society. We may not be able to unmask the Other, but we can learn about it by studying its actions.

originally posted by: TDawg61
Its posters like Karl who drew me to ATS in 2006.Thanx Karl.

I think stuff like this is the future of anomalous phenomena research—seeing the connections between seemingly different types of paranormal events.


Some very interesting speculation there bud and thanks for posting it - have been looking at high strangeness 'humanoid' cases within forests and looks like there's quite a few freaky ones out there.


This case as described by Leonard Nimoy also has a few Faerie lore parallels including being disoriented in the woods, the Oz factor / missing time and being given strange pills to swallow..

Well thanks guys those comments mean a lot. 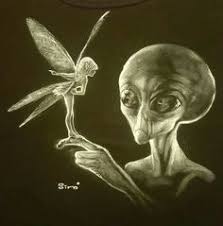 So, several years ago, stimulated by wonder and also the peculiar thought that some were pushing that my own favorite anomaly (UFOs) was "just" Faery in modern dress, I started that quest.

this video gave me the chills

Yes equal parts very interesting and disturbing mate (if true of course) - Carpenter does make some rather compelling points about the similarities in global reports though.

If you want a real wild ride then check out this presentation by Preston Dennett - did find his research into UFOs being witnessed around mines very interesting.

It could just be a rule of alien diplomacy for some alien cultures.

"If you see a creature wearing iron, they are either human, or a human's pet. Leave them alone, please. Or you'll have to pay a "wild life interference fine"


originally posted by: Specimen88
a reply to: karl 12

Yea, it very strange that for something that doesnt want to be seen to have that strange eerie glow about them, so much so that it noticable. Even with UFOs, why take the chance if let just say there was a prime directive of sorts and it were alien an that were the case.

In Hall's book, he explains it as the technology that gives them a kind of protective force field, and anti gravity also expels subatomic particles into the air, which collide with it and create the glow.

Apparently they'd rather be bullet proof than invisible.

And for all we know the thing might not even e.t at all, even though I dont deny the possibility. Like Jacque Vallee connecting Faeries to Aliens and he even mentions it I beleive, thatit sounds like it adapting with the times. Like from magic an fantasy to science an technology especially in appearance.

I've heard that most South American cases, they get nasty in comparison to other parts of the world. Some do sound very feral though, while others, dare say civilized, wonder if it the weather.


I suspect different aliens have laid claim to different regions of the Earth.

Instead of one culture claiming the whole planet, they each claim an area. And this far out from their home world, their numbers are so small it wouldn't make sense to claim too much land anyway.


I had a strange experience once, where I woke up in the middle of the night and couldn't move my body, I could only look with my eyes.
Right infront of me was this little fairy with wings floating above me dressed in a little black dress with black hair and a fuzzy blue glow around her. At the time i was young, like 15 years old so I freaked out and she floated to the back of my head and I woke up same time she disappeared into thin air.
I had this odd feeling of despair like what ever it was, was up to no good.
Was very weird I always looked at it as oh I was just out of it/ half asleep explaining it off, and now as I'm older I realize it was too real to be my imagination.

originally posted by: karl 12
If you want a real wild ride then check out this presentation by Preston Dennett - did find his research into UFOs being witnessed around mines very interesting.

I'm happy to forgo the 'wild ride' but utilising UFO in the broadest sense, 'shimmering lights', since very ancient times, have been used as an indicator of some ore bearing rocks. I think prospectors have long been in the habit of discouraging tresspassers by creating spooky stories to account for the lights and the secret of this shimmering's association with metal bearing rocks was kept esoterically until the 16th century - which is pretty good secret keeping.

Karl, thanks for posting that link, interesting reading. Any idea who the prof is ?


Edited to add ignore, the blog all but gives the identity, will have to research more of his thoughts.
edit on 27-9-2020 by chunder because: As stated