Henry Kissinger on Corona and the "liberal world order"

Why do the wrold's biggest scumbags, pieces of filth, rat bastards always seem to live forever?

Is that slimeball still breathing?

I sometimes dreamed of being marooned on a desert island with kissinger just so I can push him off a cliff and get away with it.

Vile man. Not even part of the human race.

posted on Apr, 4 2020 @ 04:26 PM
link
Thank you for all of your replies! It is a very dangerous time but I can´t work my mind around if it is orchestrated or natural disaster taken advantage of by the governments in several countries. It is getting quite transparent that a police state is one goal of this tragic pandemic. The governments are playing their cards with a more or less visible poker face.

Countries that put forth and use harsher policies are unlikely to remove them when the pandemic slow down, for example Turkey, Hungary and several countries in Africa that even uses robots for surveillance.

Even the Nordic democratic countries are doing this. The Swedish government have today tried to issue a exclusive law allowing the government to decide laws that does not need to pass through parliament but was put down by the opposition. The Norwegian government is already doing it. The Danish government issued harsh laws early on and was sometimes almost to eager to please to forthcoming police state. (I can supply you with a lot of material here). The message from the Nordic governments are that they are threatening the citizens that they should expect victims counted in thousands but also that the peak should be reached on Easter Sunday, well, how do they "know" this?

Oh, and you can of course read a lot of "interesting" articles on the topic of globalization and the corona virus on CFR:s website, Foreign affairs.

I just have to comment, this may be the first time on ATS I have seen a thread where every poster agrees vehemently with each other, differences aside. Evil man.

posted on Apr, 4 2020 @ 07:01 PM
link
a reply to: Aurvandil
And like I been trying to say about all this being a bilderberg plot from 2019 , which Kissinger himself was wheeled in for.
Everyone was too busy with TDS soap operas to even read about this gathering at the time. Seems to me like this meeting and it's attendees are a significantly massive missing piece oof the puzzle.

Anyways I was following the attendees on twitter, and the vigilante citizen journalists did a great job of identifying them as they arrive.
Official Website
Twitter Feed

Petraeus took off in a wild sprint to get away from them, Goldman Sachs guy tired out and just slowed to a quick walk from a power walk while dodging a barrage of interrogative questions of his general policies of greed and evil. This was actually a fun video to watch when you get to them chasing down the attendees for comments lol.
I went to the Bilderberg Conference in Montreux in 2019 to discuss the secret meeting with other alternative journalists, to confront the participants. Following an analysis of the Bilderberg agenda and the list of participants, there will be confrontations between Victor Halberstadt (Bilderberg Chairman), Richard J. Gnodde (Goldman Sachs), Matthias Döpfner (Springer), Alexander Karp (Palantir) and David Petraeus (CIA). Pictures by Peter Thiel (Paypal) and Sonja Jost (DeLeChem).

Wtf is Stacey Abrams doing there? Shes pretty damn low on the totem pole, is she the elite rep for social and civil disorder?? Maybe her missions is to stir racial divide on behalf of the elites of the NWO/Bilderberg?

This Guardian article caught many good shots of some elitists on the yacht where they had a private dinner and discussed global policy no doubt.
Bathed in late afternoon sun, the US secretary of state, Mike Pompeo, boarded a steamboat on Lake Geneva. He was there for drinks and nibbles with the King of Holland and the head of Nato, a glamorous end to a busy day at the Bilderberg summit. 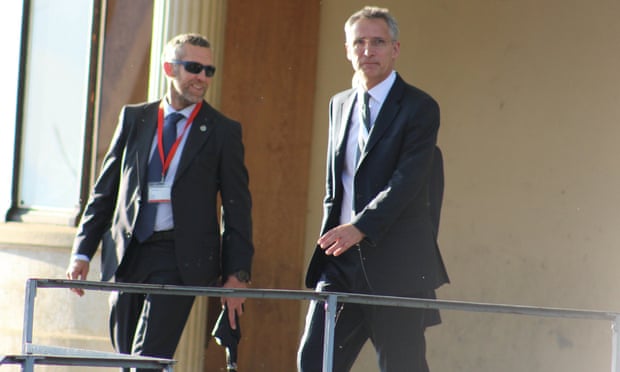 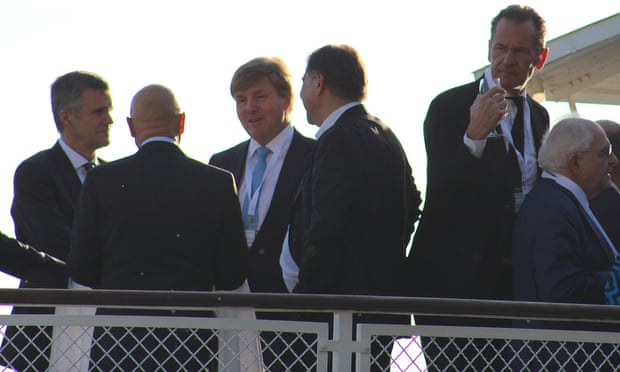 Up on deck, King Willem-Alexander of the Netherlands chatted to James O Ellis, a former head of US Strategic Command, now a director of Lockheed Martin. A Netflix board member squeezed past on his way to the bar. Photograph: Charlie Skelton/The Guardian 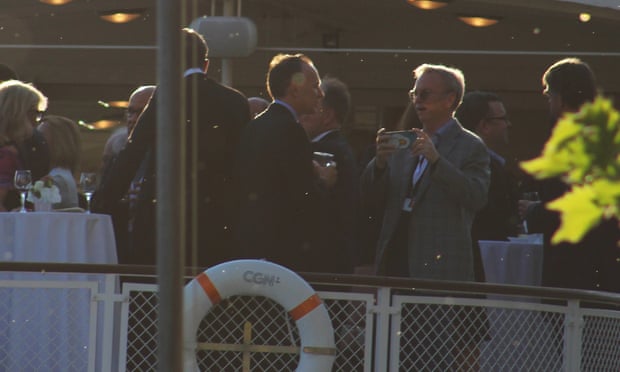 At the ship’s stern a former chief executive of Google, Eric Schmidt, broke off from chatting to the CEO of French finance giant Axa to take snaps of the lake. An influential figure, Schmidt is chair of the Pentagon’s Defense Innovation Board and also heads a new US government advisory group on artificial intelligence. Photograph: Charlie Skelton/The Guardian 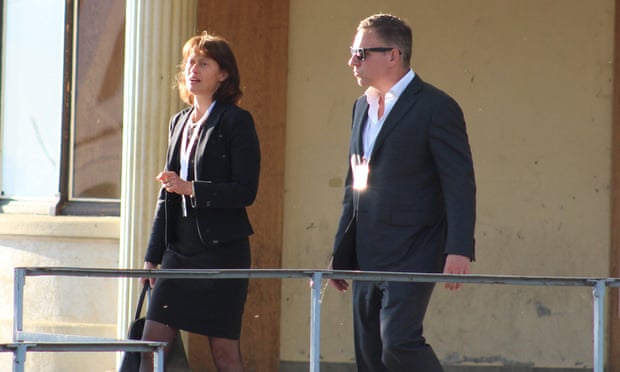 Bilderberg has a keen and growing interest in hi-tech and AI. Schmidt’s fellow Bilderberg insider Peter Thiel, the billionaire founder of PayPal and a director of Facebook, was seen arriving with the Swedish physicist and AI expert Sara Mazur. Photograph: Charlie Skelton/The Guardian 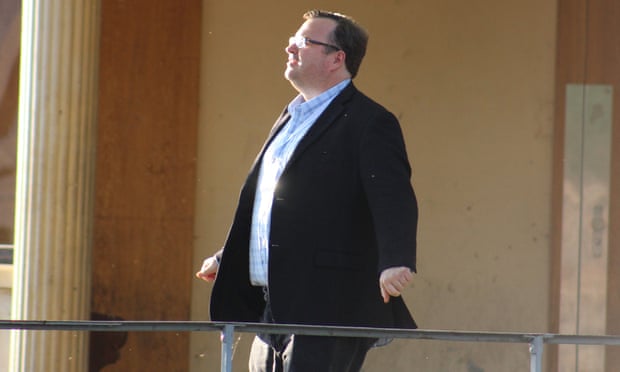 LinkedIn founder Reid Hoffman, another adviser to the Pentagon on tech. The Microsoft board member and Bilderberg regular practically floated up the gangplank, looking delighted to feel the sun on his skin. Photograph: Charlie Skelton/The Guardian 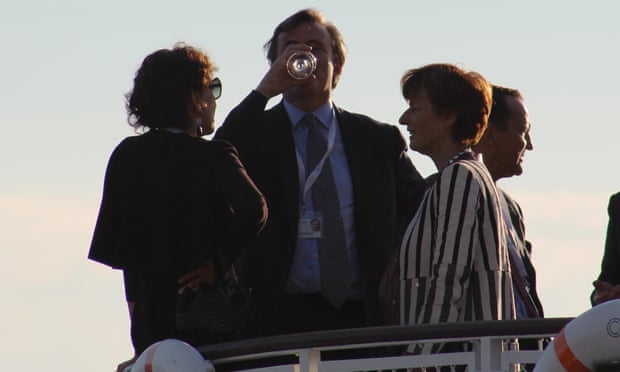 This year’s conference was more than usually packed with “embedded” reporters who, as part of the deal, say nothing about what goes on. Here’s journalist John Micklethwait, editor-in-chief of Bloomberg News, happily putting it away between the head of Unesco on the left and another director of Axa on the right. Photograph: Charlie Skelton/The Guardian 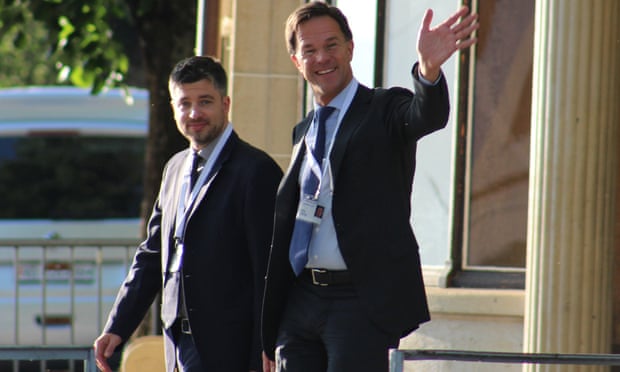 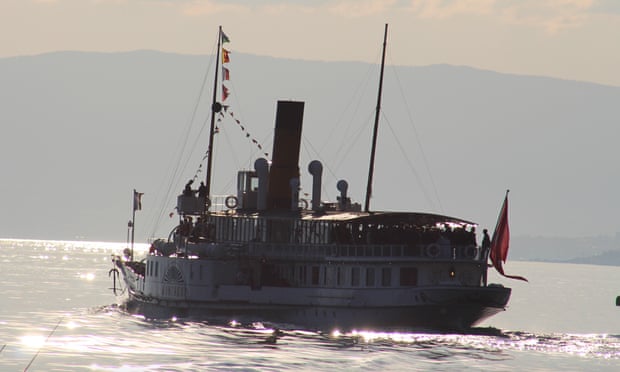 The boat sets off for Chillon Castle, where Pompeo gave a Q&A and participants were treated to a banquet. Photograph: Charlie Skelton/The Guardian
A large chunk of the agenda had a military flavour: “The weaponisation of social media”, “cyber threats”, even “the importance of space”. A couple of weeks ago, Stoltenberg announced that Nato is about to announce a new “space policy”.
Woah, NATO is going to announce a new space policy, which will clearly be happening very soon after this meeting is over. Holy cow guys, why are we ignoring this stuff???

LOL that's basically what I was going to post. Wondering if there is anyone outside of the, say, 2,000 worst people on the planet who don't find Kissinger to be one of the worst, most vile beings ever to walk the Earth.

originally posted by: ColoradoJens
a reply to: Aurvandil

I just have to comment, this may be the first time on ATS I have seen a thread where every poster agrees vehemently with each other, differences aside. Evil man.

Hi, yes, same here! I have been a member here for some years and I totally agree with you! Just proves what an evil man he is, I guess!

originally posted by: Plotus
""the liberal world order need to be protected and should provide 'security, order, economic well-being, and justice."

I have been conservative forever but here on the forum, insisted that for a healthy Nation we need two or three parties, not just Republican. We can not grow and expect a healthy mindset with out including other parties.
Ultimately the people will choose.


There is no balance between the two. One side is guns and oil and the other is homosexuality and bicycles. What you have is one party implementing drastic policies for a few years and then the other making some of their own. You don't end up with a balanced mix of the two, you end up with an incoherent mess. Not to mention half of what they do is pandering to garner votes and the other half is carrying out their hidden agenda.

The people choose between a turd sandwich and a giant douche, they've got damn near nothing to do with policy.

He's not a man. He's an immortal supervillain.

posted on Apr, 5 2020 @ 09:13 AM
link
He is a 'mouthpiece' of the Top/Elite 1%... He is useful, but is probably declining in relevance among his peers and maybe not even privy to every deed undertaken by the more youthful 1%'ers

born with a silver-spoon, in Furth...right next to Nuremberg

originally posted by: ColoradoJens
a reply to: Aurvandil

I just have to comment, this may be the first time on ATS I have seen a thread where every poster agrees vehemently with each other, differences aside.

Ha yes it probably is mate.

And like I been trying to say about all this being a bilderberg plot from 2019 , which Kissinger himself was wheeled in for.

Here's what he's been working on with the Rockefellers all these years.

originally posted by: DrakeINFERNO
WTF how is he still alive? He seemed ancient decades ago.

You can live a very long life when you drink the blood of sacrificed children, just look at the Queen of England.