I guess you missed our little pow-wow in this thread last night.

I'm not listening to the WaPo or carewemust.

posted on Apr, 5 2020 @ 03:11 PM
link
why some users on ATS are so adamant that the virus is real and there are no lies or agendas i don't understand. Even if there's a virus (for me a strong FLU) it's blatantly obvious that the MSM are lying and hyping this up.

some users look like paid shills honestly, they don't even accept that they may be in fact wrong or there's something else going on.

I will give another example, Fernando Santos (Portuguese National Soccer team coach ) mother died yesterday of natural causes but the media labelled it Covid19. Today the media said they were wrong and that she had no covid19. How can we trust these bastards on the news?

posted on Apr, 5 2020 @ 03:51 PM
link
It seems there are problems all over the USA with mortuaries and funeral homes. Crematoriums running 25/7 in some places.
They too are scarmbling to provide adequate equipment, as the after death contagion issue still isn't certain and as I posted earlier the CDC recommend full PPE for embalming and autopsies. These people are under enormous pressure too and have to deal with grieving relatives unable to attend funerals or say goodbye to their loved ones.

New York Cemetaries are apparently restricting the number of bodies they will accept per day creating backlogs and doctors can't always sign off on death certificates which again causes delays. According to one article some people have been unable to obtain the necessary paperwork as County Offices are closed.

One company has the ability to deal with 40-60 bodies, but last Thursday had 185 and says he can't get hold of refrigerated lorries and companies are charging over the top prices for those he can get

In Equador they have turned to cardboard coffins with Equador being yet another country whose Ministers seem to be lying about their figures. The "official" death toll is 172 deaths, but one Politician has stated that in just one day he issued 480 death certificates and 150 bodies are need of collection each day. 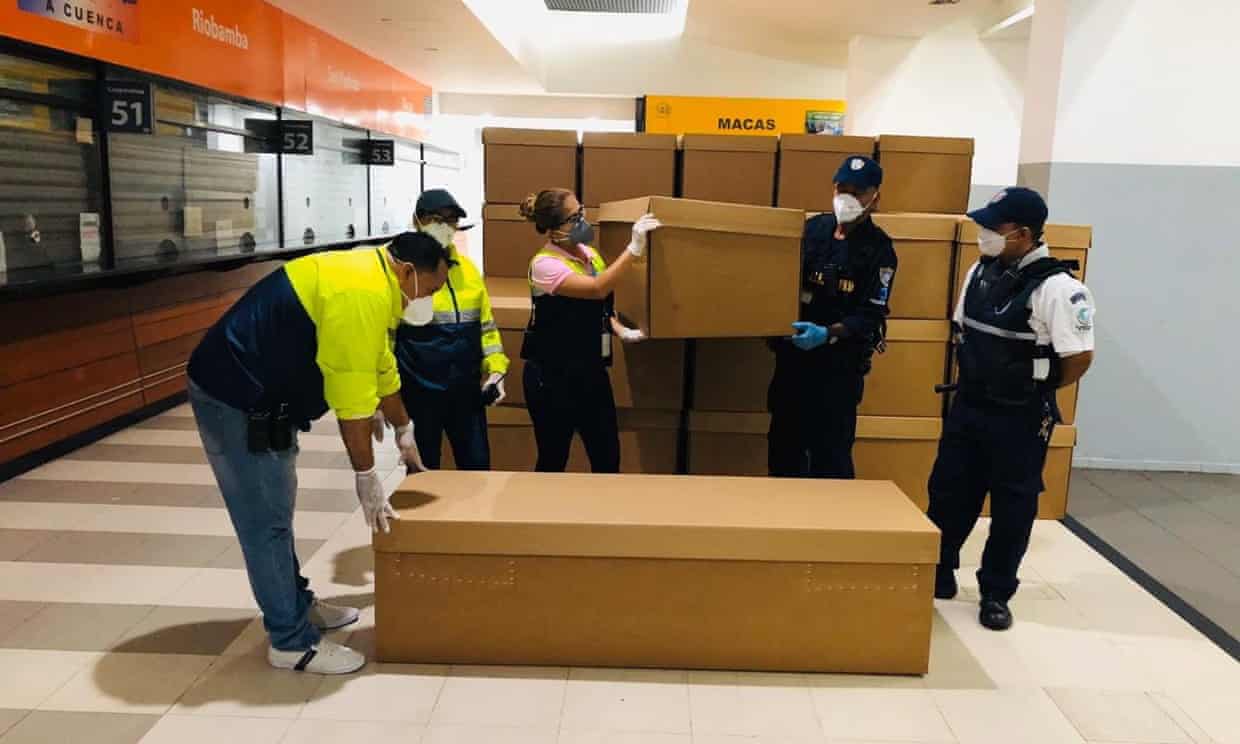 The Guardian
a reply to: MotherMayEye

posted on Apr, 5 2020 @ 03:55 PM
link
We can't for the most part but unless they are called out on their lies it will continue. The media is only partially to blame though, as many Editors and media conglomerates are "helped" with what to report. Many of our previously most trusted information agencies are loyal to their owners and their political views, NOT the general public

The more I've looked into this whole scenario the less it makes sense...but I'm not an expert, but as I've said before if "they" are caught lying fudging or changing narratives once then they will do it again and again. I swear, sometimes I feel like I'm in a huge global experiment!

a reply to: Picollo30

posted on Apr, 5 2020 @ 04:04 PM
link
I don't think it's fair or helpful to chastise the folks who are really scared. There is a huge, literally global, campaign of fear afoot here. Of course, it's going to scare people. That's what it's been designed to do. I have had many talks with friends and family about this. Some want to ridicule the ' scared masses' and what good does that do? It's impossible to retain new information and think critically when you're terrified. I don't have a link but there are countless studies on fear and memory and fear and learning new material if anyone wanted to look into it. For the folks who are afraid and you try to ' show them the light' they cannot see it. Picture the movies we've all seen where someone with a gun to their head cannot remember the safe combination they have known for years. The fear machine is working and it's not anyone's fault if they believe it and the scarier the news gets the less likely they are to try to think any differently.
I implore you be kind to them. I think many of us are afraid right now, just of different things.

posted on Apr, 5 2020 @ 04:05 PM
link
Based on my experience the number of COVID deaths outside of China which is outright lying is being under reported

Why are they causing hysteria and fear to keep us confined to our homes? The need to create fear, hyping up the number of deaths is there for everyone to see.

There's something behind all this. Maybe the "virus" was released to see how we as global society can cope with extreme measures, how much can we take till we snap.

Governor Cuomo removed a lot of wind from the sails of conspirators today when he said New York might be turning the corner to recovery already.


I am not under house arrest.

This morning I took my old refrigerator to the dump.
Yesterday I went grocery shopping.
Today, I will go row my skiff for a while.

Not one of these things involves a violation of the order issued by the Governor of my state. I checked.


he said New York might be turning the corner to recovery already.


He didn't say that.

Meanwhile in other parts of the world there is a cop outside your house asking where are you going? do you really need to leave home? are you an essential worker? i can't even move from city to city in the same country, it doesn't matter if i was tested negative or not.

posted on Apr, 5 2020 @ 04:21 PM
link
a reply to: Picollo30
Ok. I didn't notice your location until you posted that.
Still, it does not appear that you are under house arrest, though your restrictions are greater than ours.

To answer your original question, they want to limit your contact with others in order to protect the community.

posted on Apr, 5 2020 @ 04:41 PM
link
As you mentioned it I'll respond with have you heard about Event 201? The table top pandemic conference hosted by Bill & Melinda Gates Back and the John Hopkins Institute in October 2019? Just 2 months before the probable first known case in China?

a reply to: Picollo30

Did you catch the oddball Potus statement about sending the navy down to the coast of Venezuela to do some counter narcotics operation last week? It was April 1. Look at the dates in this article.

From the TIME article — Schuyler Hill funeral home — their last obituary is from March 13. That struck me as odd - but they aren’t the only ones not reporting recent obituaries. The photo of the funeral director holding two phones at the same time is interesting, too.

This one from the same article — Leo F. Kearns Funeral Home — they only reported three deaths “entrusted to their care,” last week: 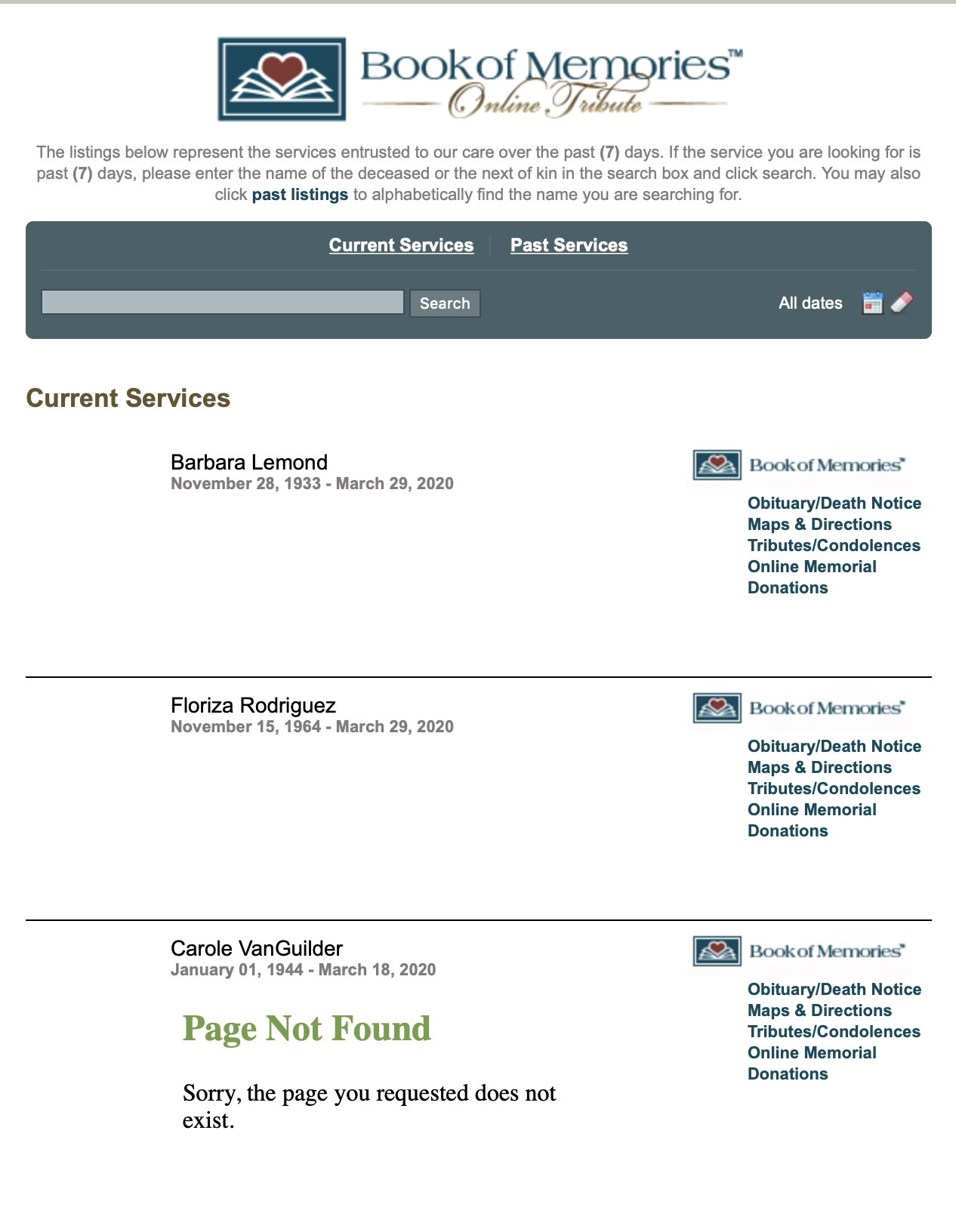 Kemp Funeral Home, from the NBC article, reported 7 deaths in the last week, although the article says they have the remains of 13 people who died from COVID-19 awaiting burial....for the reasons you mentioned.

Also, from that same article — Cherubini McInerney Funeral Home on Staten Island — their last obituary is dated March 19…there’s really no way to discern how busy they are other than the characterizations included in these news reports.

I don’t think there is a widespread problem with funeral homes that are overrun in the U.S. Perhaps in a few places located near ‘hotspot’ hospitals, but even a look at my local area doesn’t indicate anything unusual to suggest an overwhelming number of deaths.

posted on Apr, 5 2020 @ 05:19 PM
link
You're probably right, America is a big country and is bound to have areas where there is little to no activity and then hotspots elsewhere, but each one in the various articles are complaining of the stress and pressure to obtain equipment and store so many bodies and emotional stress to the families which they are having to deal with more than usual. I dunno but at least they haven't ordered burnings only yet!

I think that many funeral homes aren't publicising services etc as no-one can attend in any event or they simply haven't the time to update websites etc, but it will be interesting to keep following the funeral/crematoria figures and see if they change over the coming weeks/months or if there really aren't the huge numbers of deaths reported

I live in a group of shires with over 200,000 people and there has only been one recorded death.

the MSM is becoming a virus, just to get viewers. we know this is global, we know how to prevent ourselves from it, but they still bang on about the death toll.

As I long suspected, the MSM are necromancers-they feed on death.

posted on Apr, 5 2020 @ 06:32 PM
link
And all the while banging on about fake news & dangerous hoaxes, whilst happily perpetrating the very same!

A lot of countries have been asking retired doctors to get back to work to help with COVID-19, including Italy...

So that claim of yours that these retired doctors were not working with COVID-19 patients because of their age can be debunked straight away.

Even the U.S. has had to call in retired doctors, and other medical staff to return to work because of COVID-19.

This has been happening in several countries around the world. Many of those doctors, nurses, etc, are elderly. They know they can die and still they put their lives at risk to help others.

add and correct comment, and add links.
edit on 6-4-2020 by ElectricUniverse because: (no reason given)

posted on Apr, 6 2020 @ 03:49 AM
link
The doctors quoted in the obituaries on the Italian site were retired. maybe some did come out of retirement for a week or 2. Bear in mind the majority of these doctors were over 70yrs old.
But the point of the op is that the actual webpage changed and removed their dates of birth, the issue wasn't whether or not they died of covid19 but why it was felt necessary to remove their dob and hype up the deaths in the media as being active working doctors on the frontlines

Now let's take a look at a few of those names
Dr Roberto Stella - dob 22/7/1952 He was actually a GP not a Hospital doctor from a small town near Milan, not a retired doctor brought out to fight the virus. So on that point I was wrong about him being retired but the misconception remains
Bruna Galavotti - dob 3/4/1933 Was a psychiatrist nothing to do with corvid19
Guiseppe Borghi - dob 19/1/1956 Was a GP in Londi no cause of death listed
Massimo Borghese - dob 12/3/1957 Dr Borghese was a communications & speech therapist for autistic children in Naples did not work in a hospital and strangely his memorial page was online the day before his death was announced!
Dr Marcello Natali - dob 13/9/1963 Died of double pneumonia but was listed as a corvid 19 death although it is not known just when he tested positive or even if he was actually tested

Anyway that's just a few, my point stands, they were almost all over the age of 60 with the majority being over 70yrs old and these statistics were removed from the FNMO Website, which as a result gives a totally different impression. I can only presume they did this for that purpose so that people wouldn't think it was an "old person" disease. These doctors heroic though they were, were already in the very vulnerable range before even submitting themselves to infected hospitals and patients
a reply to: ElectricUniverse