I just wanted to give the (although talky) complete title to remain in context.

It's actually been a couple of days, and there's been to my knowledge no mention
of this more-than-gaffe other than peripherally. It's shocking even now that CBS
has also to my knowledge NOT RETRACTED or made a correction otherwise to
this issue. Norah O'Donnell just signed off from the 6PM national news prog: and
not a peep directed to the 'mistake'.

www.foxnews.com...
My thanks to the misremembered individual for the original heads-up... and weigh in
for sure to receive proper credit. Mods if this is a redundant thread BTW no hard feels.
rant/
It's also becoming something of a thing to splatter the interwhap with a falsi-- and later
pitch the my-bad on page 14 if at all. Remember the Kentucky gun range shooterUP
not cleverly disguised with a turban?? Not that I love select-fire weaps that much...
but calling Kentucky Syria and wartime is a little much even for an IllNoisan.
If this is going to be what even CBS (Yeah I remember you Walt RIP) is going to call
accurate reporting of the truth; I'm having a real panic attack about ever getting
back what we had once. Like those Amendment thingys on the quarterdeck of the
Constellation. /rant 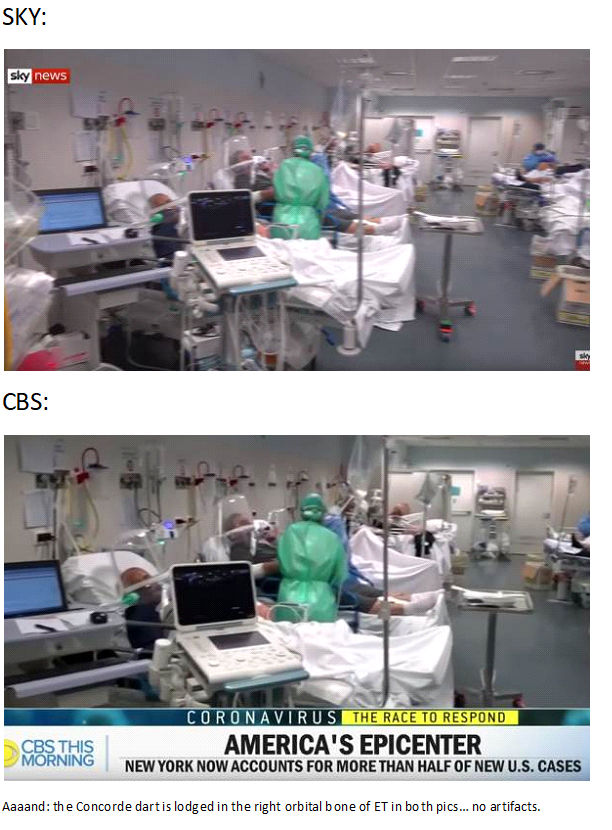 Lastly, the picture of the Lombardi hospital and the Elmhurst are out there. It
may also say quite a bit for someone out there calling the frames shopped.
Evidently they were NOT, since they were the same original cut/pasties.
I give up on the MSM--- and have you yet?
edit on 2-4-2020 by derfreebie because: Get that pair of prints, YOU LACKEY. Thanks Tyler...

Presstitutes Embedded in the Pay of the CIA:
A Confession from the Profession by Dr. Udo Ulfkotte

Coercion: Why We Listen to What "They" Say
by Douglas Rushkoff

CBS showing Italy and saying it was the USA was NOT a mistake. It was intentional. Were it not for social media, they would not have even thought of telling Americans about this "innocent mistake".

Furthermore...CBS remains squarely in the "PANIC AMERICANS!" crowd, even though they were called out for the Italy-USA deception.

The new coronavirus has now infected 1 million people across the world, a milestone reached just four months after it first surfaced in the Chinese city of Wuhan. More than 51,000 have died and 208,000 recovered in what has become the biggest global public health crisis of our time.


Only DOOM from CBS:

The number of confirmed coronavirus cases worldwide topped 1 million on Thursday — sooner than even top public health officials had anticipated. The number of deaths also soared past 51,000.

MSM Anti-America outlets CNN-NBC-ABC are following the CBS example. No surprise there.

Lastly, the picture of the Lombardi hospital and the Elmhurst are out there. It
may also say quite a bit for someone out there calling the frames shopped.
Evidently they were NOT, since they were the same original cut/pasties.
I give up on the MSM--- and have you yet?

The footage is not from Sky News but from the CBS filming team in Italy. Several news teams were allowed to film in the Italian hospital.

The screen grab used is the portion from 1:47 in the following CBS footage from Italy.