OMG, So Many Americans Have Died Since WA's First COVID Death!!!


Your link says that they were just following federal guidelines.

No that's what Cuomo said as described in the link.Answering questions
under fire for either gross negligence and incompetence. Or worse if more
nefarious intentions come to light.

You can't even see past your nose if you think there was some federal
guideline that says put covid patients in nursing homes with the most
vulnerable. It was known from the start that seniors were at the most
risk from covid.

So several democratic governors order nursing homes to take in cases.?
Cuomo even did it after Trump sent beds built housing sent ventilators
and a navy ship.

originally posted by: hutch622
a reply to: burdman30ott6 .
Its about time to revisit this thread . Total us deaths sit at 97,426 . Interested on what your thoughts are now , keeping in mind of course that this number would be much higher if restriction were not put in place .

Yeah, he passed the buck. I guess someone who cares could look up if these federal guidelines exist or not.

I see you didn't address the fact that less than those sent to nursing homes died, meaning that they didn't necessarily infect anyone else, as pre your claim.

posted on May, 24 2020 @ 02:35 PM
link
a reply to: carsforkids
Not that. We already know his admin did it. I meant, if they were just following federal guidelines, do these exist, and if they do, do they or don't they suggest this type of action.

You are still skirting the number of deaths in nursing homes being less than those sent there in the first place, which contradicts your claim that this action exposed people in the nursing homes.

Where is the highest concentrations of death from C-19?

In both California and New York and even other states?

How did the death rate at nursing homes get so high if not
as a direct result of these Executive actions?

Oh that's right I failed to consider coincidence the old stand by sorry.

The article you linked showed the number of deaths at nursing homes was less than those sent there. It would have to be higher for your claim to hold water.

Do you have the federal guidelines that show this wasn't suggested by the feds, wouldn't those also be executive actions?

Don't know why you bring california into it. They have a pretty low per capita death count, actually 29th out of the 50 states.


The article you linked showed the number of deaths at nursing homes was less than those sent there.
It would have to be higher for your claim to hold water.

Also I have included California in my initial post.


They could've been a lot less if Cuomo and Newsom hadn't forced
nursing homes to accept China virus positive patients.

That is what the article basically said. Don't know why you thought it supported your claim.

originally posted by: hutch622
a reply to: burdman30ott6 .
Interested on what your thoughts are now , keeping in mind of course that this number would be much higher if restriction were not put in place .


That is what the article basically said. Don't know why you thought it supported your claim.

My claim is that sending people with corvid 19 caused infections and deaths to
occur in the nursing home. Death that should/would not have happened if the
residents were protected instead of infected by these ass hat governors!

Why are you having so much trouble with this? It's the same out come
if you're sitting in your house perfectly fine and ten infected people come
in and infect you then you die then you go on the death count.

Then I could say if you hadn't let those people in. There would be fewer deaths
do to C-19.

That's it! That's all folks!

And the number of deaths in that article doesn't show that anyone else was infected by the transfers and where in fact lower than those transferred.

You are assuming that there were additional infections but the numbers you linked don't really show that.


originally posted by: hutch622
a reply to: burdman30ott6 .
Its about time to revisit this thread . Total us deaths sit at 97,426 . Interested on what your thoughts are now , keeping in mind of course that this number would be much higher if restriction were not put in place .

And that is a problem because people should learn from these events. It's always better to be cautious at first, and again for the record I never said "let's ban our rights..."

At the beginning no one knew what to expect, more so because China and Iran lied the entire time with the help of the communist director of WHO, whom is not a real doctor.

According to Chinese protesters in China COVID-19 was really bad. Several people even claimed that they saw Chinese authorities cremated people with COVID-19 when they were still alive.

Hopefully we don't get to see this level of infection in the U.S. But there is still the problem of the virus re-infecting people whom already had the virus. I have never called for the drastic measures used by China, and never said/wrote U.S. rights should be banned... But caution is always the better choice. People should be responsible. Proclaiming "this virus is nothing" goes against what happened in China, and continues to happen in a lesser manner.

People can make bad choices if they don't have all info available about an event like this. Look at what Cuomo did sending infected patients into senior homes, not heeding the advice of his own experts.

I am praying that the stronger strain of the virus doesn't get stronger, or any other strain.

i can tell you another fact which many people apparently don't know, and which authorities like Fauci are wrongly claiming.

The only masks that really protect are the N-95 masks. Which have 95% protection. The N-99 masks which protect 99% and other similar masks.

I truly don't know if this false claim is being said to have more people infected or what. But DOCTORS like Fauci should know this.

Most people are wearing the surgical masks, or even dust masks. Neither of which protect against the virus in a substantial way.

So you see, this is the reason people should be cautious because making the wrong decisions can mean getting infected with the virus.

Here is some more information which we didn't know until about a week ago.

BTW, there have been reports that people who didn't get in critical condition still can get scars in their lungs, damaging the lungs.

Those whose lungs are scarred if they get infected again with COVID-19 can put them in critical condition as the virus attacks the lungs again.

What happens if people get infected not 2 but 3 or more times? This weakens their immune system which eventually could mean those people going into critical condition and even dying even if the first time they got infected they only got mild symptoms.


edit on 26-5-2020 by ElectricUniverse because: add and correct comment.

While the exponential growth of cases and deaths has ceased for now, we are still seeing linear growth that is the number of new cases each day are about the same.

I expect another spike or worse because as restrictions are being lifted, too many are not taking precautions seriously. We need at least 80% of the population on board with social distancing, wearing a mask, washing hands, ect.. to.prevent another round of exponential growth. Unfortunately that is not happening.

The burden of proof is on you there buddy.

Monroe county in Florida(The Florida Keys) is a good example of how the lockdown works. There are two roads into the Florida Keys. US 1 and Card Sound Road. Early in April a check point was put in place on both roads allowing only residents to enter. To this date has 108 cases and 4 deaths while Dade County(Miami) has the most cases and deaths in Florida. Miami/Dade county is our neighbor to the north.

The road block will be lifted June 1st, the residents of the Keys expect cases to spike when it happens. Clearly the restrictions/road block has worked.

Also there is Sweden, the one country in Europe that did not go full down. Guess which one is Sweden is on this chart: 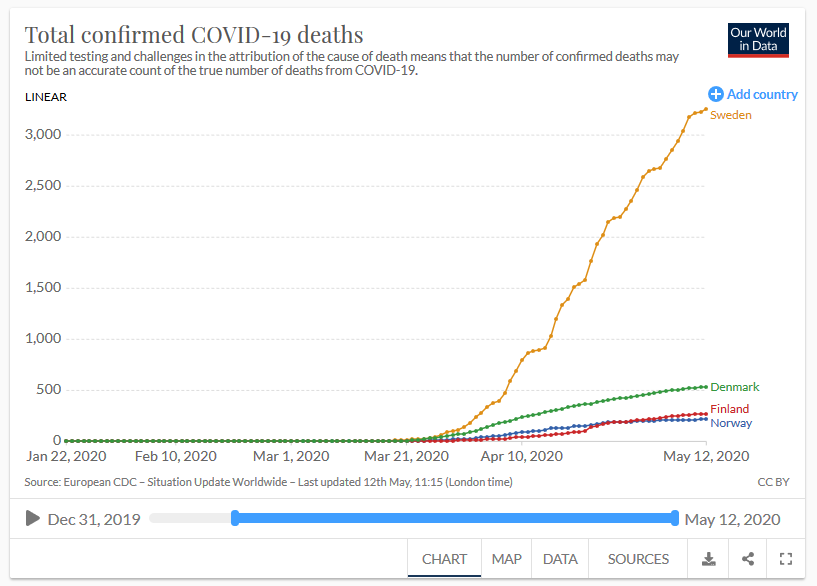 Now prove to me that the lockdown did not prevent deaths in the US!

posted on May, 26 2020 @ 11:56 AM
link
The minute I saw other countries copying the response of China I knew this was a takeover and not a pandemic. The responses were more about obliterating liberties than stopping a virus. Whenever you see science being bent to serve political aims watch out; trouble is coming.

Yes, yes, the intelligentsia is the enemy. Mos def. That makes perfect sense. It's only 33 911s in four months. It's not real until it happens to me or my family.