First, Schiff wants to form a commission to probe the coronavirus pandemic, which was discussed in this thread.

And now Pelosi wants to join in, soon after she stated this on CNN's “State of the Union:"

The panel, to be led by Majority Whip James Clyburn, will oversee the Trump administration’s handling of the $2 trillion relief package passed last week.

The speaker said the committee “will root out waste, fraud and abuse” and “protect against price-gouging, profiteering and political favoritism.” It will also try to ensure the U.S. response to the outbreak is “based on the best possible science” and the advice of leading health experts, Pelosi said.

White House spokesman Steven Groves said President Donald Trump and the White House coronavirus task force “are committing 100% of their time, energy, and resources to ending the current crisis.” He added that “any attempt to politicize the crisis even before it has ended is dangerous.”

Dangerous? Naw, it's just another Dem strategy to politicize the coronavirus in order to blame President Trump for the crashed economy and his response to the coronavirus situation. After all, it's an election year and the Democrats front-runner, Joe Biden, is embarrassing himself practically everyday with his many gaffes.

Pelosi believes that Trump cost American lives in his handling of the coronavirus situation. Maybe she forgets that Trump ordered travel restrictions from China on Jan. 31....with many Democrats and MSM journalists calling the move racist and unnecessary.

And what better person to oversee this committee, than Majority Whip James Clyburn. Clyburn? You mean the same guy who implied Trump is a racist, akin to Hitler?

"I used to wonder how could the people of Germany allow Hitler to exist. But with each passing day, I'm beginning to understand how. And that's why I'm trying to sound the alarm," he added, before claiming that Trump told more than 30 lies during his State of the Union address this year.

"Fully half of those lies, the Republican side of the House stood up and cheered they knew that was not true. But they cheered him on," Clyburn said, before continuing his comparison to Nazi Germany.

"I really believe that the people of Germany knew Adolf Hitler was lying," he said. "And before they knew it, they no longer had a chancellor but a dictator. Anything that's happened before can happen again."

You mean the same idiot who wanted Democrats to exploit the coronavirus stimulus bill?

“This is a tremendous opportunity to restructure things to fit our vision,” Majority Whip James Clyburn (D-S.C.) told lawmakers, according to a source on the call.

Pelosi wants to root out "fraud and abuse?" You mean like all that "pork" that was in her $2.5 trillion,“Take Responsibility for Workers and Families Act?”

A lot of Pelosi's "pork" was reduced in the Senate's “Phase III” bill, but it's still shameful that it contained billions of dollars going to non-essential programs. ALL of the money in that bill should've been used for essential aid to Americans and businesses directly impacted by the coronavirus situation.

Nope, nothing to see here folks. Just the Democrats attempting to discredit Trump's leadership right before the upcoming presidential debates and the November 3rd general election. Them Democrats are a pesky bunch aren't they? 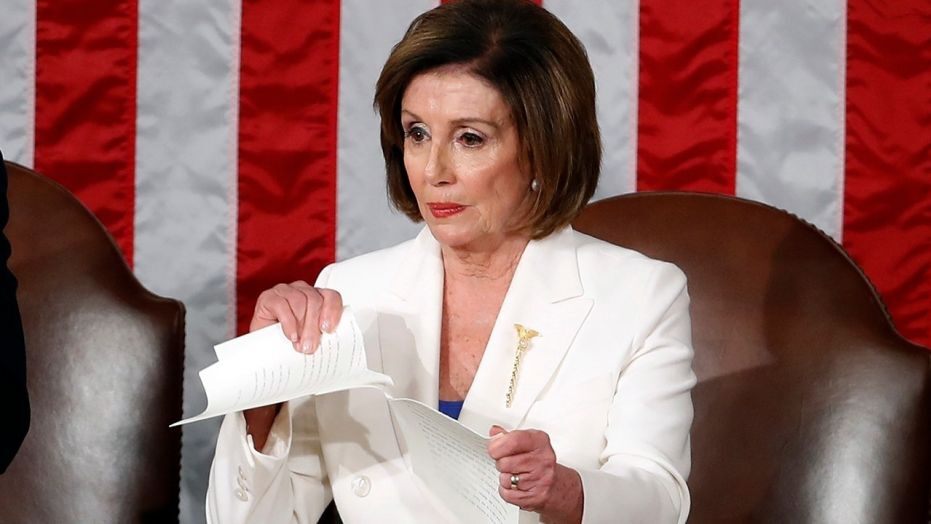 Trump was the FIRST in our government to respond and the dems attacked.

I hope that's part of their investigation

Though ideally it shouldn’t be done by Skeletor’s demented older sister.


“will root out waste, fraud and abuse” and “protect against price-gouging, profiteering and political favoritism.”


How about millions given to a performing arts center who is laying off employees ? Can we start there Nancy ?

posted on Apr, 2 2020 @ 02:15 PM
link
I guess it will be a committee where every member and all the witnesses are teleconferencing each other. Because the older frail house members are scared to come back to Washington DC

Pelosi is doing her best to start a new impeachment effort.

Pelosi ignored Biden/Obama who did absolutely nothing when 17,000 people died the swine flu (H1N1) including nearly 2000 children and more than 60,000 were sick with it.

Isn't Obama/Biden the gold standard for the Democrats for everything? Shouldn't Trump have followed their lead and let as many people die as possible?

So Pelosi will attempt through this "commission" to impeach Trump once again. Sigh, this is getting really old, really fast.

A commission after a vaccine is out and the bodies counted, to see what the nation can do better in the future WHEN this happens again is warranted.

But, that is not what Pelosi and the Democrats are doing - they are creating blame, blame, blame Trump for the virus and everything associated with it, if they could they'd blame every single conservative on the face of the earth for it.

They will pretend that Obama/Biden were perfect by ignoring totally and letting people die,
perhaps that will end up their recommendation of they are totally honest about how they feel.

After all, politics is everything, politics is all. Doesn't matter how much it may hurt the "little people" or the nation.

Politics above all else for Pelosi and her - hate at all costs for conservatives, Republicans, Trump. We all know it, it is there for the world to see.

Let those who have eyes to see, see.

Let those who have ears to hear, hear.

We see, we hear, and the judgement day will come for putting politics above people and power above all else.

I guess the Democrats must genuflect toward an 80 year old all powerful shriveled little old lady,

who thinks she will live forever, and loves to exercise her "godfather"

That's how it looks to me and others who see clearly
how much the Democratic party hates/loathes/despises
every single conservative person in the entire country.

Pelosi and the DNC would rather destroy the nation then see anyone give so much as a positive word about conservatives or conservatism, and especially Trump. That is really what this commission is all about, we see, we hear, we know.

edit on 4/2/20 by The2Billies because: addition

posted on Apr, 2 2020 @ 03:07 PM
link
Got no problem with a committee to review AFTER the crisis is over not now, I would rather have a committee addressing other pertinent issues. Or maybe this shows it's not a crisis after all, and they're politicizing every bit of it

Anyone sense that this old drunken hag is pushing for a boogaloo?

The evil left will stop at nothing to impeach Trump.

posted on Apr, 2 2020 @ 03:16 PM
link
It’s gonna be yet another exodus of supporters from the ever-dwindling dEmocrat party

originally posted by: silo13
a reply to: shawmanfromny

Actually, if they don't get voted out, you'll know that this country has seen it's best days. I can't wait until November to see what we are really made of.

Same with AOC, Omar and Tliab.

ETA: oh, forgot about Waters... let's see if she survives.
edit on 4-2-2020 by LogicalGraphitti because: (no reason given)

posted on Apr, 2 2020 @ 03:18 PM
link
the mud pit affords me the luxury of saying such niceties as wishing Nancy Pelosi would suffer the fate that Jezebel suffers, down to the Defenestration. and that the canines consume the rotten flesh post haste.....

posted on Apr, 2 2020 @ 03:20 PM
link
The left has lost a ton of relevance in the last month and need to do something to get back in the news or at least want anyone to hear them talk about...anything at all...

Even Biden suggested the President call him so the two of them can work out together this COVID-19 thingamajig... Boy talk about feeling being push to the back of the room where there are no lights or cameras...

originally posted by: Plotus
the mud pit affords me the luxury of saying such niceties as wishing Nancy Pelosi would suffer the fate that Jezebel suffers, down to the Defenestration. and that the canines consume the rotten flesh post haste.....


The shame of it is that she is missing her chance to be a great grandma. I mean, kids love their senile grandparents. Stay home Nancy. Spend time with family before your time runs out.