This to me doesn’t really look like a bomb blast, and the only proof there seems to be is just no it’s not... if you look at the pictures the bomb is actually of the road contradicting the bomb truck story which caught fire, which none of the locals see happen, just the local government say so

So it just caught fire and exploded, what would catch fire that quick and caught such a huge blast radius, how come nobody see this happen, tbh that’s a pretty huge bomb, on par with a MOAB size explosion? 100-200 homes destroyed

Authorities also said, thank god it wasn’t a meteorite because it would mean more impacts and deaths, not sure it would unless he was talking about an asteroid

If you look closer at the crater it is actually a lob sided crater, indicative of an angled strike or impact, rather than if it was a surface detonation and evenly spread

The next thing that got me thinking was/is the rash of large meteorites we’ve seen over the last couple years, it was only a matter of time for a lil strike

And lastly... the asteroid which is due shave past the earth on the 29th

Is COVID19 something else ?

Certainly creeped me out

Not saying it is or isn’t but there are a lot of people calling this virus a cover and that’s all I could think of while looking at all these images and story’s and just pondering what if, if we see any more space rocks burning up in the coming weeks, worry Lol

But another thing was, this virus is due to peak within the coming weeks right around the same time

The size of this explosion is ridiculously big

What the hell was on this supposed truck?

posted on Apr, 2 2020 @ 10:09 AM
link
You can clearly see it was meteor/asteroid damage and it was later confirmed to be just that.

The damage is mainly to the rooftops of the buildings still standing, like the blast was aerial in nature.

I wonder if more are coming!

posted on Apr, 2 2020 @ 10:23 AM
link
a reply to: TritonTaranis
Scroll down to the video. This guy trys to explain what he thinks caused it.
Nigeria explosion

originally posted by: Alchemst7
a reply to: TritonTaranis
Scroll down to the video. This guy trys to explain what he thinks caused it.
Nigeria explosion

Yeah I really don’t think this is a truck bomb

This image is pretty conclusive for me

posted on Apr, 2 2020 @ 11:15 AM
link
If more explosions that look like meteor impacts happen around the world then we are living in a movie...

This seems ominous but I'm sure the apocalypse isn't actually happening
edit on 2-4-2020 by GoShredAK because: (no reason given)

edit on 2-4-2020 by conspiracytheoristIAM because: (no reason given)

posted on Apr, 2 2020 @ 11:57 AM
link
perhaps a strike from one of the Kinetic Energy weapon platforms orbiting the planet (usa space force)

'Rods from God' I think the weapons system is called

excavating the impact might reveal evidence of a Tungsten ? Rod that dis·in·te·grat·ed !! on impact

posted on Apr, 2 2020 @ 03:33 PM
link
This was definitely not a meteorite or any other kind of kinetic energy impactor. There are several lines of evidence for that conclusion, but I will only mention the most obvious one. Any kind of kinetic energy impactor, whether it's a meteorite, a "rod from god", an airplane crashing into the ground at high speed, or whatever, operates by penetrating into the ground some distance and depositing all its kinetic energy in the subsurface. Any subsurface burst, whether its caused by a kinetic energy impactor or an explosive charge basically lifts a slug of soil out of the crater and spreads the material out on the ground, radially outward from the center of the crater. A subsurface burst always produces a raised rim of ejected material around the edge of the crater. That's called the ejecta rim. You can see a good example of that if you look at pictures of Meteor Crater, in Arizona:

This crater has no ejecta rim. This is the kind of crater that is formed by an air burst or a surface contact burst.

Like a truck loaded with dynamite.
a reply to: TritonTaranis 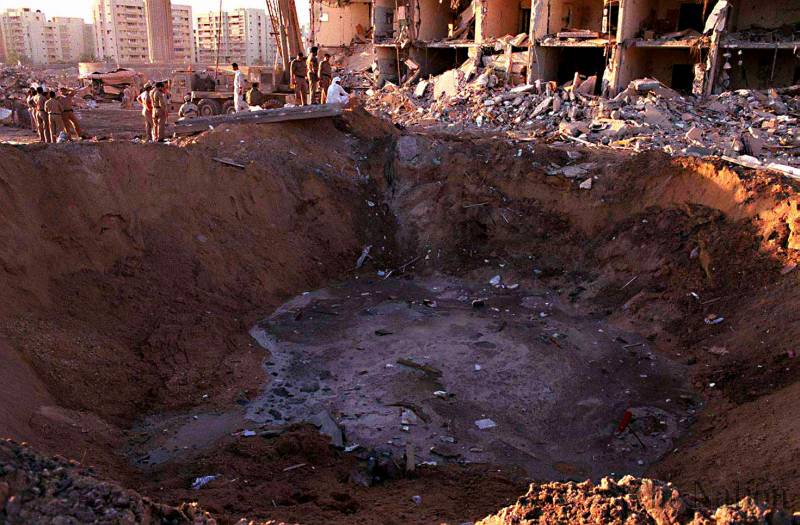 
A box truck with fertilizer did a number on the building in OK.

posted on Apr, 2 2020 @ 08:12 PM
link
I'm not sure what your point is, but that is not an ejecta rim on the crater. That is a bunch of debris that collapsed from the nearby building.a reply to: Phage

My point is that there is no reason to think the image in the OP is a result of an impact.

posted on Apr, 2 2020 @ 08:22 PM
link
a reply to: Phage
except that was targeted at a military base. Are you insinuating militants were targeting an empty field, detonated prematurely in an empty field due to return fire, or just not to judge a crater by its shape??