Honey, They Shrunk The Toilet Paper

posted on Apr, 1 2020 @ 02:34 PM
link
Did my manly duty this morning and risked my life to go to the grocery to keep my family alive.
GREAT NEWS...Kroger actually had toilet paper on the shelves again...packages and packages of it...all packed in units of six rolls.

First thought...we've finally come through the storm...EXCEPT, I had to do a doubletake.
THESE rolls were miniaturized...like 40% smaller...like just as many sheets per roll and identically packaged as they used to be...but would only feel like actual size if I were the size of a 2 yr. old holding a roll in my tiny hand.

Perhaps you've already encountered these in your grocery...but I've never seen these before in my life.


Toilet?
Again, you're doing it wrong.

For years, I thought, "Are Wagon Wheels much smaller now than when I was a kid, or have my hands simply got bigger?"


Perhaps this is a case of, "Are toilet rolls smaller, or has my a#se got bigger?"

Sorry but all this toilet paper talk recently has left me with a permanent mental picture of Beavis with his t-shirt pulled up on his head and, arms raised, muttering to himself. 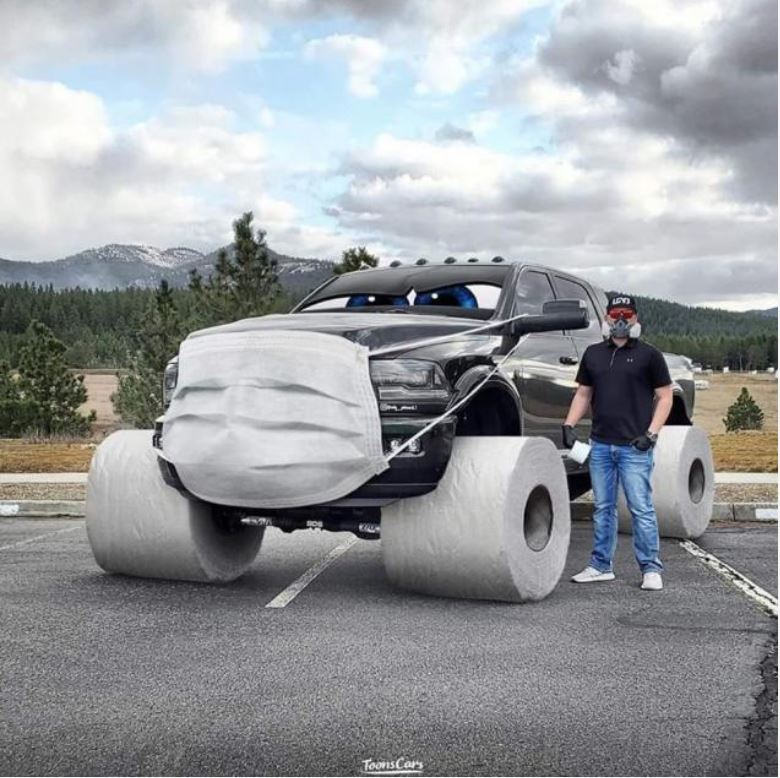 originally posted by: ConfusedBrit
It's like the 'Wagon Wheel' biscuit effect, but far more obvious.
For years, I thought, "Are Wagon Wheels much smaller now than when I was a kid, or have my hands simply got bigger?"
Perhaps this is a case of, "Are toilet rolls smaller, or has my a#se got bigger?"


Marketing ploy been going on for years ...... chocolates, crisps, packets of sweets

toilet rolls, and so on.

Its a *price increase* without you actually realising it!!!!

posted on Apr, 1 2020 @ 04:06 PM
link
Maybe they are stretching resources?
People are paying more attention now to how many rolls are in a pack, how many sheets are on a roll. The only way to get more supply to more people, is to make the rolls a little shorter.

Really, when you think about it, the edges go to waste, only the middle gets used anyway! Unless you are using it, folding it over & using it again! 💩 🚽


Your local roto rooter services thank you for the extra business.
edit on 1-4-2020 by Deny Arrogance because: (no reason given)


Your local roto rooter services thank you for the extra business.

♫Roto-Rooter, that's our name...
when Coronavirus clogs your drain
Roto-Rooter!♫

originally posted by: IAMTAT
Did my manly duty this morning

Sounds like your manly doody tomorrow morning will face some challenges.

posted on Apr, 1 2020 @ 09:34 PM
link
Not to mention the prices are going up on a lot of things. 4 packs of brand name TP are $4+ now. Beef has gone up $2-4/lb on most things. If anything, I'm putting blame on the chain stores for not putting purchase limits on things 2-3 weeks ago. I went to the local dollar store last week to get a few things we were out of and a lady was at the checkout with a shopping cart full of soup. Yep. Why??? This is beyond ridiculous. Michigan is up to almost 10K infections and almost 400 deaths now, mostly around Detroit. Some people in our area are starting to get antsy and unsettled. Others are laying back, patiently waiting to be able to return to work and back to a normal life. I saw someone jogging down our alley yesterday and see people walking their dogs all the time.

I had to venture out yesterday because I haven't been hoarding, and we needed some important things. Aside from a few less people shopping than normal there was adequate distancing and a lot of people were wearing gloves and masks. Of course there were no masks to be found at any of the stores I went to, but it took three stores just to find some hamburger. I don't plan on going anywhere else for a while, we've got enough food for quite a while. I just don't know what to think right now, this is something no one alive has experienced before. So for the time being I'm going to just take it day by day. I'm still working, wife is off now until who knows when. I think I feel worse about it when I'm tired, I took a nap this afternoon and I don't feel as anxious as I did. I saw a document from our governor saying she was considering extending the stay-at-home order for an additional 70 days beyond what she originally wanted. That puts us deep into June.

I know the police have it bad, being exposed to this virus from a lot of different directions and three high-up Detroit area cops died within the last week from the virus, but I think it's going to get ugly if this isn't figured out soon. People are not going to put up with being confined. The MSP and other agencies are putting out Facebook posts saying they are not stopping people to "check their papers" to see if they're essential or not, but there are a lot of people saying they're finding excuses to stop people so they can check. I don't know. I forget to use my blinker sometimes. Should I be stopped for that if I'm doing nothing else wrong? There is the letter of the law and the spirit of the law. How many times do we see police disregard the law because they forgot or because they're the police and they don't need to signal. We know that happens.

I am angry about a few things. China, for not reporting this when they should have. People for hoarding out of fear. The media for causing that fear. People that will lose their businesses out of an abundance of caution when they didn't do a darned thing wrong. The potential for losing my job and having to start over again, at 57, with so many others out of work. I'm angry at the politicians who have been using this for political gain or just being aholes for political reasons. I'm angry at the idiot kids who refuse to stay away from each other. It's not like they can't communicate in other ways.

Yeah, those TP packages might be smaller but at least they're still coming.

I scoot my butt against the carpet.

originally posted by: tom farnhill
i have to believe that the toilet paper was a hoax that people believed and that started the run on it


It was no hoax.......if toilet roll was on your shopping list, you were out of luck.

The shelves were EMPTY


why would anyone think that the toilet paper was going to run out because we have a virus out break .

That is the conundrum or conspiracy which ever way you wish to view it?