What a Coincidence: Coronavirus Related

So I'm not usually one that watches TV. Especially not whatever the network stations are airing during primetime. But I couldn't help but notice an ad played multiple times on my 40 minute drive home hyping up an "epic Chicago Fire & PD crossover event."

A deadly epidemic is spreading across the nation and has reached Chicago.

Are we supposed to believe that it's just a coincidence these episodes, that were filmed months before Covid 19 was even a thing, were scheduled to air the day after the CDC ramped up fear levels with their press conference?

I don't know about you, but I feel like this stinks worse than a butt convention.

It's like that Illuminati card game that everyone cites but not as real.

It makes sense. Isn't Chicago known for cars and bullets? Both travel fast and could even help the spread.

I hear you. And what about Google earth putting Wuhan in the River!

posted on Feb, 26 2020 @ 04:46 PM
link
I have looked at a few anti virus cleansers in my house and they have all had claims to be effective against cv virus. Odd thing is that all of them are over 2 years old.


I guess they stopped being effective somehow. Probably global warming or something.

Guess it will just happen and then you die. 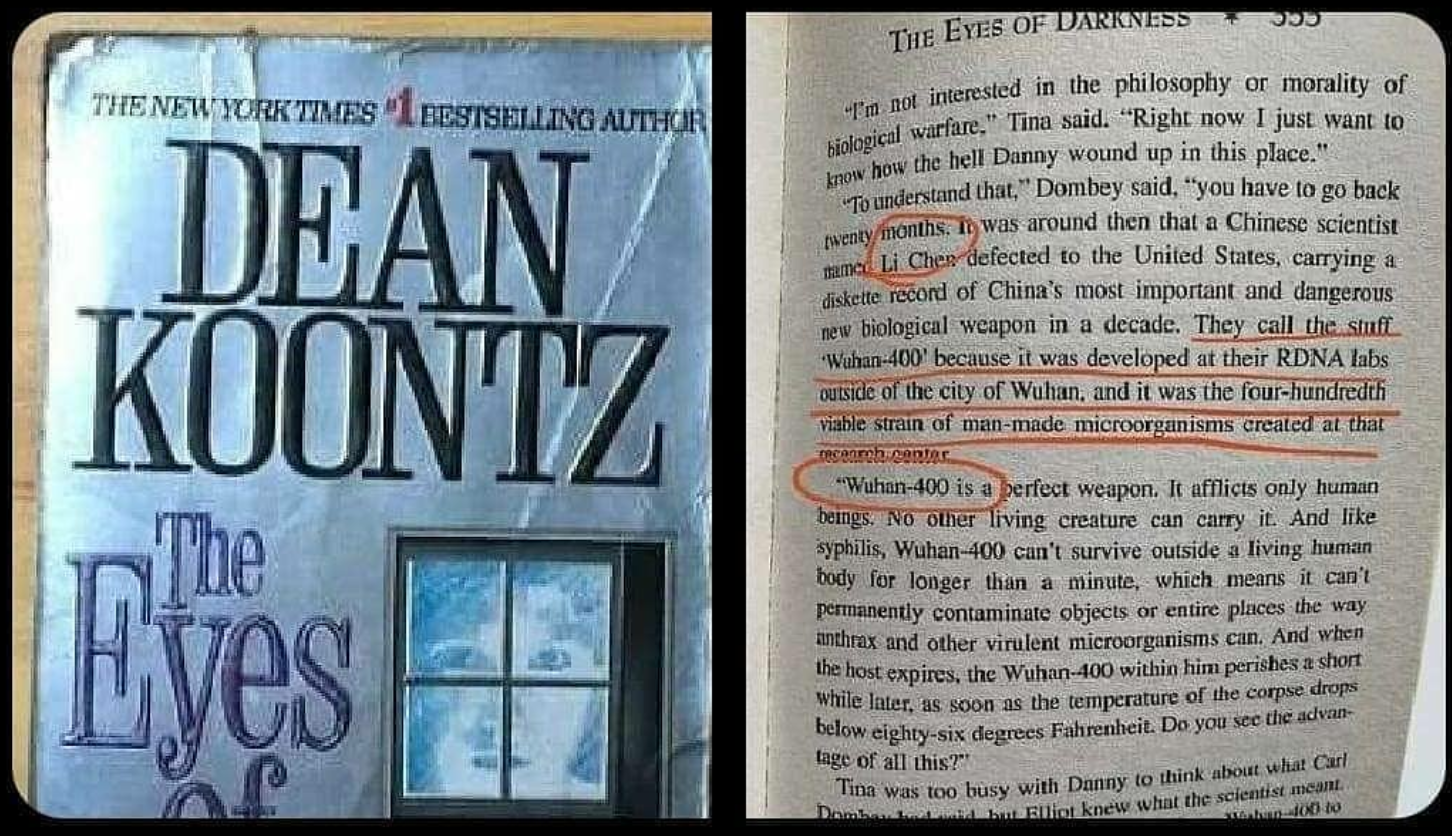 I loved dean koontz books as a kid, nice find.


Sorry I've been out.
Things have changed so much since I posted this.

A mother sends her son, on a camping trip with a leader who has led this trip into the mountains 16 times before without mishap; that is until this time. Every single camper and leader and driver die with no explanation. As the grieving mother who is the protagonist begins to accept the fact that her son, Danny, is dead she starts getting vicious bully-like attacks from nowhere saying he is not dead, such as writing on chalk boards, words from printers and other various 'signs'. Along with her new friend, Elliot Stryker, Christina Evans sets out to find out what could have possibly happened on the day that her son 'died'.

There's a catch...
It was originally the Gorki 400 till 89.
And the wiki page keeps changing hourly.

So someone needs to dig up an original copy.

For the moment I'm sceptical do to the Wikipedia keeps changing
So hoax till proven now.. 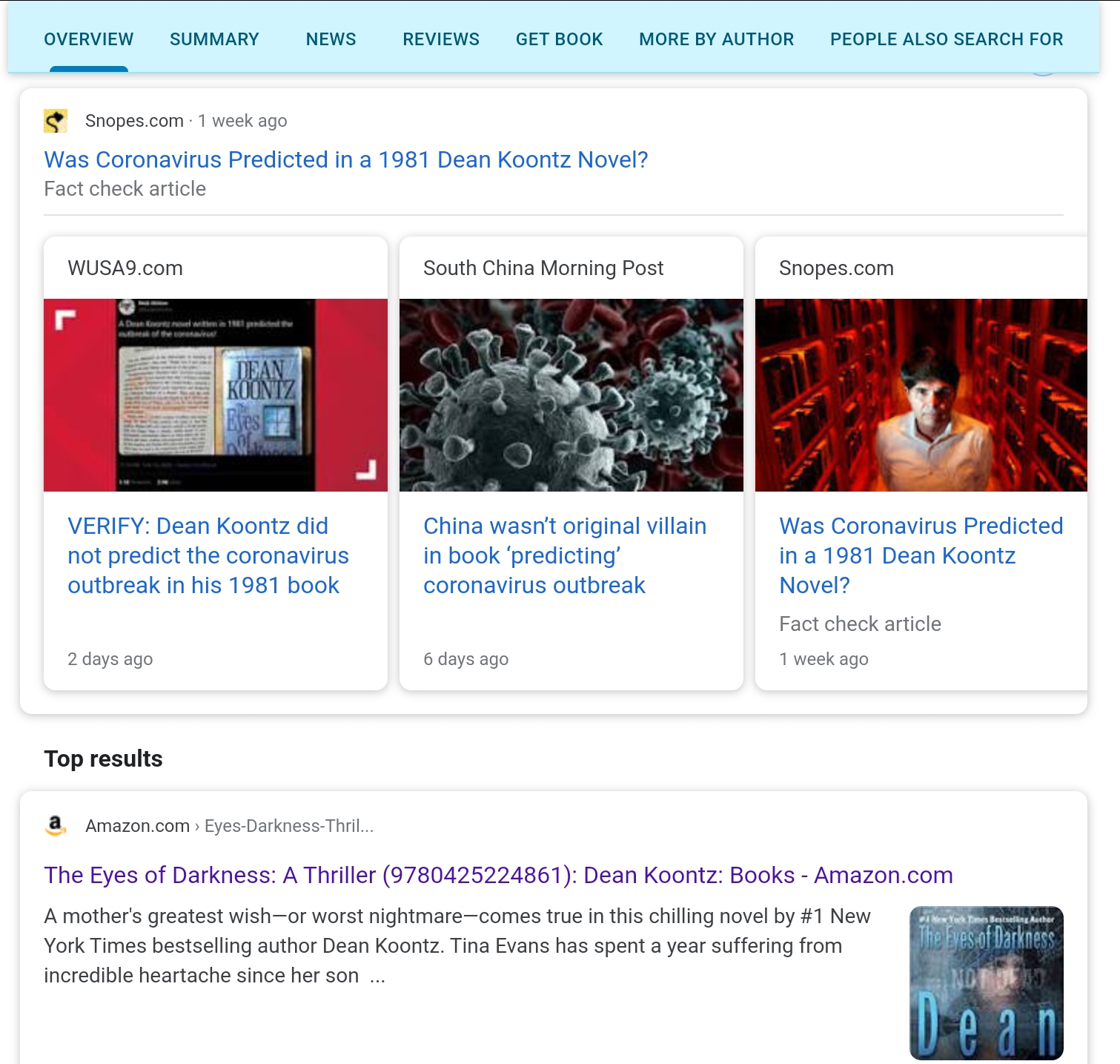 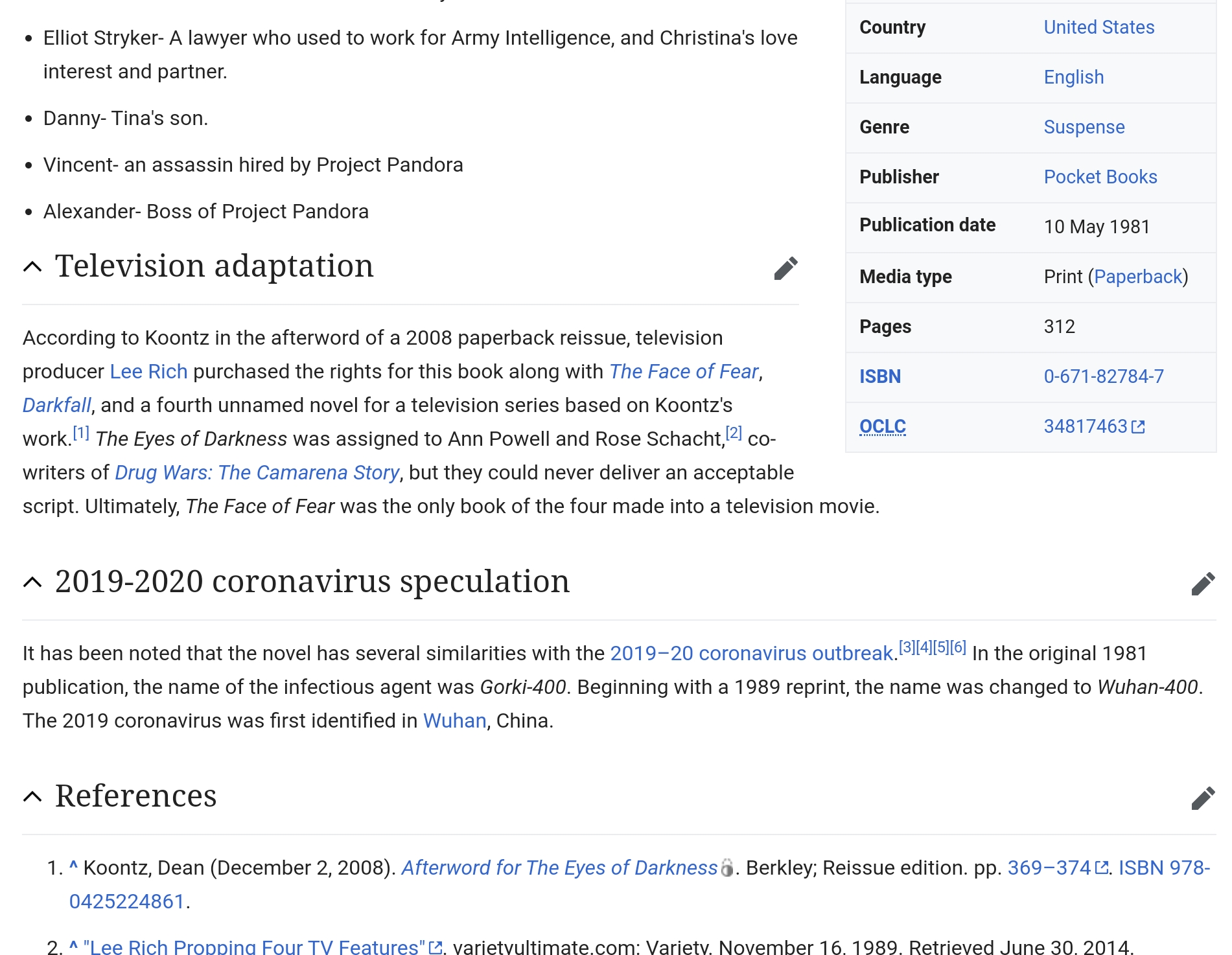 I see said the blind man.

I had a copy of that book and it's a damn shame I didn't keep it.

Damn!t.
You can get it on Amazon, but the original excerpts had the Wuhan 400 ( and Gorki 400 prior ).
That wiki keeps changing.

Well, I just rang 3 second hand book stores locally and all 3 said they've had people looking for the book just in the last couple of days.

originally posted by: Fools
I have looked at a few anti virus cleansers in my house and they have all had claims to be effective against cv virus. Odd thing is that all of them are over 2 years old.


I guess they stopped being effective somehow. Probably global warming or something.


Yes, coronaviruses have been around and known about for many, many years. The one causing problems currently is a new (e.g. "novel") coronavirus. Disinfectants were killing coronaviruses long before Covid-19 was even a glimmer in a Wuhan lab researcher's microscope.

Yea because of this very reason. Koontz gotta be raking it in right now.
edit on 26-2-2020 by Bigburgh because: (no reason given)

Yea because of this very reason. Koontz gotta be raking it in right now.


Yep, I do live in a very alternative area, all the hippies are onto it.
edit on 26-2-2020 by hopenotfeariswhatweneed because: (no reason given)