What do these dummies expect when they have 4 candidates splitting the moderate to liberal vote and leaving Bernie with the bulk of the base.

Are these people just stupid, or what?. Their egos are getting Bernie the nomination and they're wondering what’s happening.

In 30-plus years of politics, I’ve never seen this level of doom. I’ve never had a day with so many people texting, emailing, calling me with so much doom and gloom,” said Matt Bennett of the center-left group Third Way after Sanders' win in Nevada.

Bloomberg, Buttigieg, Clobuchar should just get out of the race and let Biden fight it out with Bernie. That’s the ONLY path to stop Bernie.

Buttigieg, Klobuchar, you can’t even say their names both have a chance like a snowball in hell of getting the nomination.

Bloomberg either. The average Democrat hates him and his debate performance was atrocious! He's listless, doesn't have any policies to bank on. All he's got is the billions. If he does buy the election he will turn off too many people.


Among the pitches from pro-Biden forces to donors: Bloomberg could not overcome past policies that alienated minorities, most prominently the stop-and-frisk policing tactic he embraced as New York City mayor. They argued that if Bloomberg stays in the race, Sanders will clean up on Super Tuesday, then it’s game over.

“For the establishment, I think it’s Joe or bust,” said Simon Rosenberg, New Democrat Network president, who served as a senior strategist for the Democratic Congressional Campaign Committee in 2018.

Biden, no super candidate like Obama, though, does have a chance if the above would quit so the moderate vote won’t split allowing Bernie to win big in the crazy democratic delusion machine that a radical socialist can win. An unlikely possibility.

On behalf of conservative voters in America, just let me say...

Trump won't even need to campaign if he gets the Dem nomination... 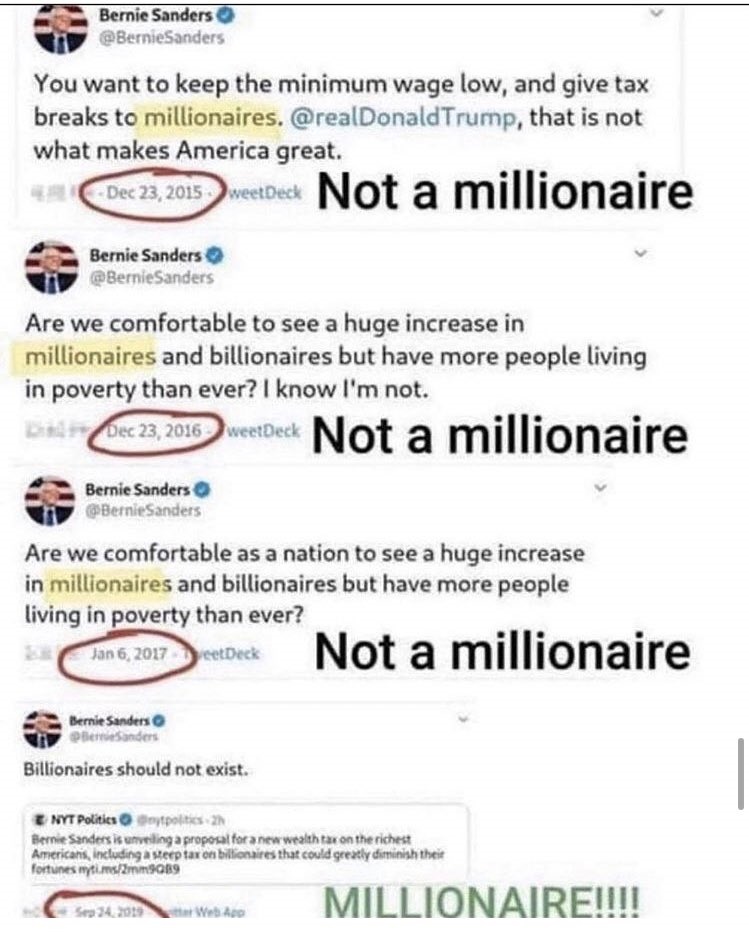 Don't worry, the DNC will crap on him again and hand the nomination to Biden when they feel like it, regardless of voting outcome.

Wow, I actually agree with something you posted: the Bloompa-Loompa has ticked off about every group in existence (including conservatives who like their Big Gulps). I just don't think Sleepy Creepy Uncle Quid-Pro-Joe is the best choice to lead the "moderate" wing of the party. Far too many gaffes, from making up war stories from whole cloth to forgetting what state he's in. Did you watch the debate? Every time he spoke, he was stuttering. At one point, I was afraid for him, thinking he was about to have a stroke on national TV or something. Not to mention, how many delegates has he got thus far? Oh, yeah, zero...

As amazing as it may seem, I think Mayor Pete BootyJuice has the best shot at the "moderate" (excuse me, I think I threw up in my mouth a little there) Democratic base. So far, he does have a few delegates, he acts the most Presidential of any of the candidates, and he seems to know foreign relations better than the lady (oops, am I a misogynist now?) who sits on the Foreign Relations Committee. His policies suck big time, but that goes for everyone who claims the title "Democrat" it seems.

Of course, BootyJuice isn't in the big boys' club yet; he's just a Mayor and not even of a huge city. So, you guys get to choose between the completely undesirables. You guys have been trying to create a train wreck since 2016; looks like you finally got one...

posted on Feb, 24 2020 @ 01:14 AM
link
In the Democratic party it seems there has been too much elbow rubbing, um, # it, pedophilia, and politics for money for them to have been able to come with a politician within the system. The scope is in decades not days. Come on, they let a celebrity become president xD Politics finally failed the people and they were too dumb to see it as far as I can see and are so quick to look for something new to blame. I have people all over my facebook feed believing that Bernie said he was going to tax everyone that makes 29k+ 52%. That's ludicrous riot status tax rates people. Let's face it, these politicians in a lot of ways are too sensitive with bigger egos than they can walk with so they relied too much on one another and no one was their to take their place when it was their turn to bat. A trust fall that ends the worst way possible. A weak yet overconfident party just seems to be, in it's structure, a minute opening for just about any kind of change. Over time it stretches. I just hope we don't get to the point to where everything is so FUBAR where the only thing we know to do is follow the rules and by that time there would be enough intelligent people to manipulate them. (which they probably already are tbh; it's politics )

I could recommend an English language course, 101.

I would need an interpreter to gauge what you posted

So, I don’t know whether I agree with you or not

Bernie’s problems are number one, admitting he is raising taxes

He’s too rigid. He has to go to the middle if he wants to have a chance.

Bernie is lying about Medicare. IT IS NOT FREE

It does NOT even have dental, hearing, eyeglasses. He will have to spend billions shoring up Medicare before he wants to eliminate great health plans for Medicare

Millions of people will be furious once they find out Medicare is not that great.

The democrats likely are headed for disaster

Oh, sorry, I see the problem. I have been working on translating Progressive to English so much I completely forgot some people might need a translation from English to Progressive.

On a serious note, I really don't see that much difference between the "moderate" candidates (Bloomberg, Buttigieg, Biden, Steyer, Klobuchar) and the "fringe" candidates (Sanders, Warren). All are for violation of the Second Amendment, all are for free healthcare for all including illegal immigrants, and all are supportive of Global Warming-based wealth distribution. The only real difference is that Bernie and Lie-awatha are proposing more sweeping changes that are simply unattainable in any practical sense. To be honest, I would prefer Bernie over any of the others still viable, simply because economics would prevent him from carrying out many of his crazy policies.

Someone like Steyer would do so much harm to this country that we may never recover, by actually implementing policies that would kill the economy over his entire term rather than over 3 days. I listened to an interview with him; he supports slavery reparation, a $22/hour Minimum Wage, and immediate elimination of all fossil fuels (read: immediate economic disaster due to lack of energy).

Poor old Joe Biden... he just ain't got it, son. Sorry, but you're backing a horse with three broken legs.

Sorry if I am just dense, but this just does not make any sense to me at all.

Donald Trump wasn't a Republican until after he announced his candidacy.

This is the sweetness of karma on DNC.

They went in bed with radical left, with antifa, shooters and stalkers. Their senators screaming lies and obscenities and members of Congress behaving like a hord of drunken apes.

So, Bernie is the final punch, offf the cliff. Bye bye DNC...

Meanwhile, President Trump is featured at the biggest rally the world has ever seen!

And nobody calls him out on moving the bar. That's ok though. If he gets the nomination Trump will deliver that right hook.

posted on Feb, 24 2020 @ 06:39 AM
link
Second round of voting will have super delegates and in walks Hildabeast and Bloomers!!

I don't think bidon ever had a chance against bernie. Even if it was just the two of them.

Mayor Pete has the best chance to beat Bernie.