DAMASCUS, (BM) – Russian bombers destroyed Turkish tanks, 18 MLRS installations and about 50 armored personnel carriers, learned BulgarianMilitary.com citing news agency Aviapro publication. Erdogan’s violation of the agreements with Moscow resulted in huge losses for Turkey in Syria. Since the beginning of last week, Turkish troops and pro-Turkish terrorists have lost almost a hundred units of armored vehicles illegally transported to Syria, and it’s not Syria, but Russian military aviation that is crushing the enemy.

According to the arguments of local and foreign news agencies, today Turkey has lost at least 23 tanks in Syria (including 4 Leopard tanks – approx. Ed.), About 50 armored personnel carriers and armored vehicles, 18 MLRS installations, more than 20 military trucks and 2 warehouses with weapons and ammunition.

Will there now be warhawks screaming about Russia attacking a NATO nation forces, yada, yada, yada???? And the "obvious" need for retaliation? By NATO?

We are all blindsided by corona virus scare and locusts eating the entire planet...

Wondering what Turkey's reply or spin will be?

Anyhow, not taking sides in this, just putting it out there, as it seems "suppressed" at this point.

posted on Feb, 19 2020 @ 01:23 AM
link
a reply to: pravdaseeker
Most of those vehicles were actually being operated by various factions of the militants in the area. Funny how Turkey rejoined the Russians in joint patrols after. Week or two of being absent. Wondering if this was a motivator for that lol. The Turkish soldiers also left one of their observation posts that ended up being surrounded by the Syrian army after the town it sits in was liberated by the SAA.

Erdogans Ottoman revival seems to have taken a around turn. Even the GNA in Libya who initially sought his help have made statements questioning his motives in that country, going as far as stating that he may want to try and control and rule over Libya. Maybe they just know a loser when they see one??

Probably because the Russians are kicking some butt and they don't want to draw attention to the truth about the white helmets chemical attack.

posted on Feb, 19 2020 @ 01:56 AM
link
a reply to: pravdaseeker
I retweeted this image I found earlier today when I first read it. There is Also a video of some of these strikes, which can be matched to the images as well, will have to post it tomorrow, this device is about to run out of charge. 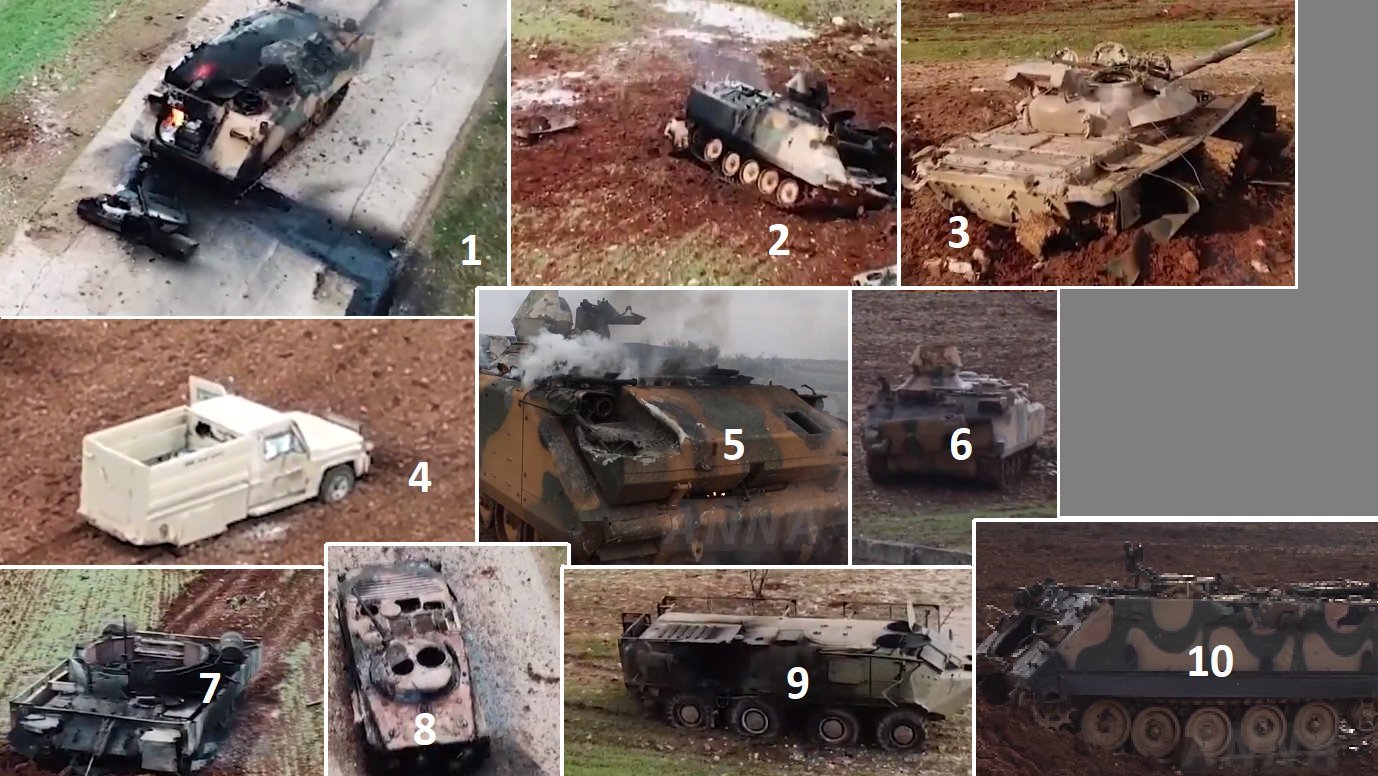 A yank will be along shortly to say they are the bestest as usual...
edit on 19-2-2020 by Lagomorphe because: Crap and not Murican.

posted on Feb, 19 2020 @ 05:17 AM
link
That's great! Much respect for Mr. Putin for his determance to keep on fighting against the sick oppressors, trying to undermine and destroy a legitimate government and country.

A yank will be along shortly to say they are the bestest as usual...

Because it is fake.

There is absolutely no point for Russia to attack Turkish forces.

big attack for sure, wonder how many secret ground forces are involved in all that

originally posted by: AugustusMasonicus
a reply to: pravdaseeker

If we ask nicely, maybe they'll drop a few on Berkley Campus during Social Sciences Class..

This was not fake and if you researched anything in life you would know it. However, it was not Turkish army regulars driving these vehicles. These have been delivered by Erdogan's government to the militants for a couple years now. This is also not the first time Russian And Syrian air Force have destroyed armor driven by the militants in idlib and Aleppo. However, I do believe it's the first time they have disabled their Leopold tanks.

All you have to do is go through the thread on idlib And you will see every single militant assault for the last two years have utilized various Turkey MIC armored trucks including tracked vehicles and different MLRS technical type trucks.

ISIS successfully destroyed several Abrams tanks in Iraq, but it was not Americans operating. Iraqis were driving very barebones versions without any ERA, which I thought was rude. Why couldn't we just have sold them upgrade packages?? Many Iraqi Abrams tanks were needlessly wasted by atgm's during OIR in Iraq.

In a comment published on Wednesday on the Facebook, Okamura reiterated that the operations launched by the Syrian Arab Army against terrorists in Idleb and Aleppo come in framework of its right to defend its country and to restore stability to it.

posted on Feb, 19 2020 @ 11:26 AM
link
So far I only have the Twitter link to the video ANNA streamed the day they carried out this op. When I find the video on YT I will embed it.

clip from ANNA news stream
edit on 2-19-2020 by worldstarcountry because: (no reason given)

Hello worldstarcountry; I just wanted to thank you for your efforts to post pics and more information on this news story.

posted on Feb, 19 2020 @ 04:59 PM
link
a reply to: Wookiep
NATO has no plans or interest in Article 5 support to Turkey. For one, it does not cover incidents that were a result of foreign combat in another country. Article 5 is a defensive act only if I recall. The sovereignty of a member state has to be violated in order for a mandate to go into effect. Seeing as the Turkish Armed forces lost lives during the violation of another countries sovereignty , there is no legal recourse for NATO support.
This was also told to a reporter of TASS news agency during a NATO meeting in Brussels recently. The following comes from the article and includes a timeline of the escalations between Syria and Turkey.

"NATO countries will not support the invocation of Article 5 over the death of Turkish troops in Idlib in early February," the source pointed out. According to him, NATO is not considering the possibility of providing Turkey with military assistance in the event of a military operation in the region. The diplomat said that the death of Turkish troops in Idlib was a tragedy but it had taken place during a unilateral military operation on foreign soil, which goes beyond Article 5 of NATO’s founding treaty. He added that the fact was clear to Turkey as well, which is why Ankara had not tried to initiate NATO consultations on the matter.

As for the possibility of a Turkish military operation aimed at halting the advance of Syrian government forces in Idlib and assisting illegal armed groups in retaining control of certain parts of the province, the source noted that as a NATO member, Turkey had the political support of other member states but there were no plans to provide Ankara with military assistance.

The diplomat emphasized that not all NATO members shared Turkey’s goals in Syria and Libya, and the issue of providing military support to Turkey had not been raised at a meeting of NATO defense ministers on February 12-13.

The situation in the Syrian province of Idlib escalated after the Russian and Turkish militaries had made another attempt to ensure a ceasefire. In response, terrorists increased attacks, killing both Russian and Turkish military experts. The Syrian army took action against extremists, seizing the town of Saraqib on February 5. On February 7, Turkey’s Milliyet newspaper reported that three out of 12 Turkish observation points were located in areas controlled by Damascus.

Some of those losses you see in the image came from the most recent convoy of about 50 MBT's and self propelled artillery.

posted on Feb, 19 2020 @ 05:10 PM
link
a reply to: pravdaseeker
I could not find the video on youtube, its probably titled in Russian or something. So I went head and just uploaded it myself.