Did A UFO-Air Force Encounter Accidentally Kill 4 In New York? 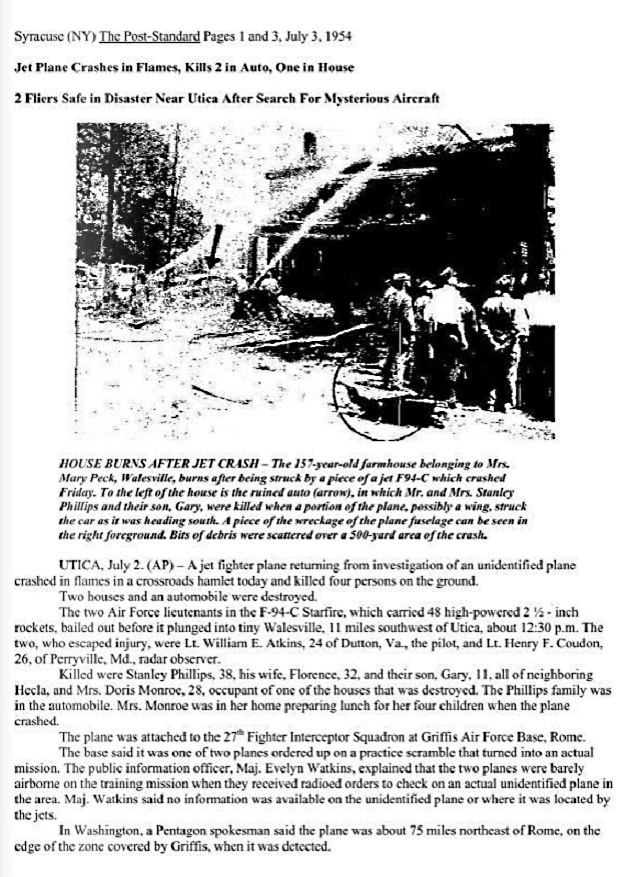 There were two ATS threads that briefly mentioned this incident, one written in 2004 and another in 2008. These threads contained only two sentences that mentioned this case.

Westmoreland had always been a relatively peaceful town until July 2, 1954 when a UFO shot down an Air Force jet and made it crash into Walesville corners.

In an article for the online publication called The Windswept Press, entitled “Walesville: A true story of the July 2, 1954 tragedy,” researcher David Griffin points out that “all through that year there had been news reports of flying disks, cigar shaped tubes, and a variety of saucers in the skies over the United States. They were calling it the ‘Great UFO Wave of 1954’.”

...the jet was ordered to check on an “unidentified plane” that had suddenly appeared in the area guarded by air defense operations. After doing that “a fire developed in the forward section of the aircraft in flight and the heat in the cockpit became so intense the pilot and radar observer were forced to leave the aircraft.”

Even the New York Times quotes an unnamed Mohawk Airlines pilot as having seen “a light apparently shining” from whatever object the Air Force jet was chasing. The paper of record also reported that in the moments immediately before the crash thousands of people across the state were clogging phonelines to the police with reports of an unidentified flying object in the skies over their heads.

I just watched a YouTube video about this incident 15 minutes ago. Up until now, I never even heard about this UFO encounter and the subsequent crash. The 13 minute video was just posted yesterday and I found it to be very informative. Perhaps some of you will find it interesting as well.

Buried in a Project Blue Book file dated 1954 is a story that’s been forgotten by most...save for residents of Walesville, a small village in upstate New York. That July, an Air Force F-94 Starfire was flying toward an unidentified object to investigate it when something went wrong. Within 25 minutes, the plane would crash, taking the lives of four people on the ground — destroying two houses and an automobile with a family inside. A military spokesman said a fire caused the crash, but an investigation later found no evidence of smoke or oil in the remnants of the cockpit. The official USAF investigation blamed a series of coincidences for the crash, but a report written by Donald Keyhoe is in the Blue Book file, which suggests the UFO itself was to blame. Electromagnetic interference from UFO encounters has been seen many times before, so this fits that pattern. As we'll show in the video, the full story is filled with contradictory statements from USAF personnel at the time, and even inaccurate explanations given to journalists in 1954 that were only learned to be misleading when these files were declassified.

posted on Feb, 14 2020 @ 12:44 AM
link
I wonder if the electronic jamming was intentional, or by accident, due to the jet getting too close to the UFO?

Great story. It brings to mind the number of other UFO - foreign air force related incidents we've heard about over the years from other countries as well.

I don't recall hearing about this particular case, but then again my memory sucks. Intriguing case nonetheless.

posted on Feb, 14 2020 @ 06:54 AM
link
I consider myself very well versed in UFO cases, also from new York. I’ve never heard of this case. I always find something new on ATS! Thank you for your post

...the jet was ordered to check on an “unidentified plane” that had suddenly appeared in the area guarded by air defense operations. After doing that “a fire developed in the forward section of the aircraft in flight and

the heat in the cockpit became so intense the pilot and radar observer were forced to leave the aircraft.”

"leave the aircraft"?"
How? Did they not have ejection seats in those days?

that the nosecone heated up so much suggest some kind of 'beam' weapon' . . . IIRC MASERS were developed before LASERS which first appeared in public in 1957 ... a test of some sort with a drone and the MASEER was a tad too 'strong' anfd their tagretting a tad weak?

The first maser was built by Charles H. Townes, James P. Gordon, and Herbert J. Zeiger at Columbia University in 1953. Townes, Nikolay Basov and Alexander Prokhorov were awarded the 1964 Nobel Prize in Physics for theoretical work leading to the maser. Masers are used as the timekeeping device in atomic clocks, and as extremely low-noise microwave amplifiers in radio telescopes and deep space spacecraft communication ground stations.

Modern masers can be designed to generate electromagnetic waves at not only microwave frequencies but also radio and infrared frequencies. For this reason Charles Townes suggested replacing "microwave" with the word "molecular" as the first word in the acronym maser. The laser works by the same principle as the maser, but produces higher frequency coherent radiation at visible wavelengths.

The maser was the forerunner of the laser, inspiring theoretical work by Townes and Arthur Leonard Schawlow that led to the invention of the laser in 1960 by Theodore Maiman. When the coherent optical oscillator was first imagined in 1957, it was originally called the "optical maser".


This was ultimately changed to laser for "Light Amplification by Stimulated Emission of Radiation". Gordon Gould is credited with creating this acronym in 1957.

There is no doubt jamming is a real thing, you can buy jammers or make jammers that will interfere with communications. But in so many UFO cases, the electromagnetic interference claims strain credulity, and as you point out, this is such a case. There were even electromagnetic interference claim in the Yukon UFO case, which was later found to just be a satellite re-entry, which in reality had nothing to do with the car not starting. It gets cold in Yukon and cars can have trouble starting there if the battery isn't strong even when there's no UFO.

a reply to: Zaphod58
That may be true, but youtubers will have a hard time monetizing their channel telling the truth like that. It won't get them many views.

I know, but I keep trying.

So what your saying is this is the worst possible aircraft that could have encountered this object. Gotcha.

There were actually worse, but it's definitely top 5 worst.

Some great research there mate and do wonder what happened to the gun camera footage (if there was any).

Apparently as far back as 1947 there were U.S. fighter planes with gun and telescopic cameras being 'kept ready to take off and pursue flying saucers' and there's a nice 1952 news article from Barry Greenwood's archive below stating that a new type of camera that photographs luminous phenomena has been ordered and 'will be distributed to jet plane pilots as soon as they become available' - it also mentions the Air Force is receiving new reports of flying saucers at the rate of 100 a month and that jets have been ordered to 'shoot them down'. 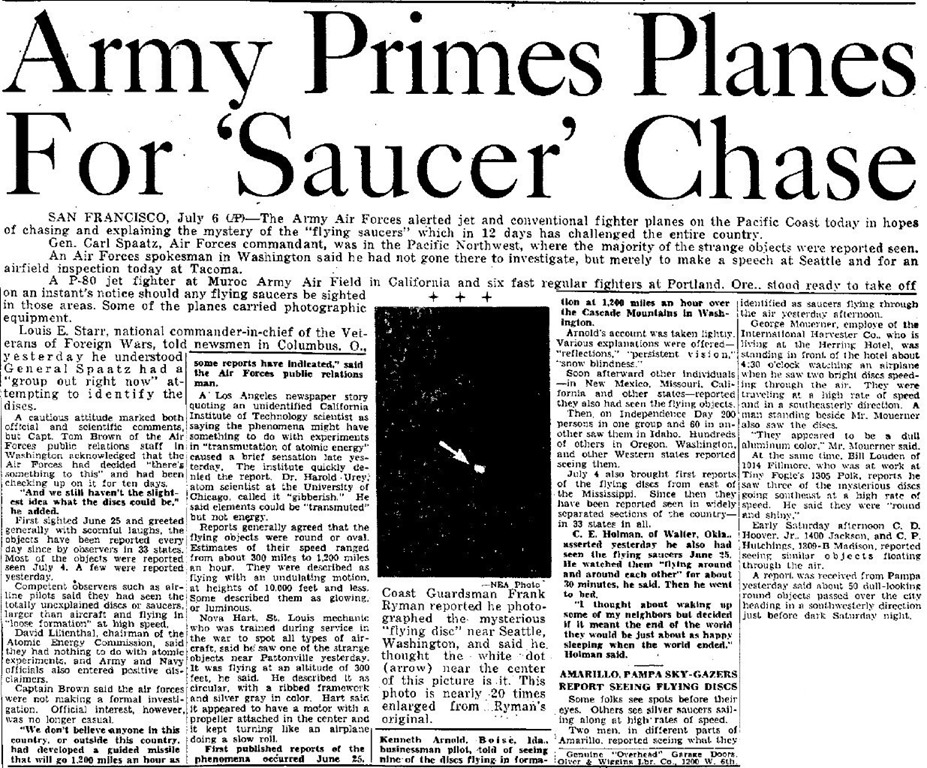 Also another similar case here from Griffiss Air Force Base two years later where authorities actually 'Requested A Plane Loaded With Passengers To Chase A UFO'.

Who or what is Keyhole?

He was a proponent for the cause.

posted on Feb, 20 2020 @ 03:55 AM
link
Hey shawn thanks for all the interesting threads mate, heres something fresh from the oven

Maybe all the crashes were caused by UFOs?

Or they were caused by early jet technology and trying to go too far, too fast.

Right, the aliens were intimidated by how fast.

They had to shut it down.