Holy Crap, Maybe He Is Actually a Racist and a Fascist!

page: 1
66
<<   2  3  4 >>
log in
join
share:
burdman30ott6
+52 more
posted on Feb, 12 2020 @ 01:58 PM
link
I'm amazed this was captured on audio. I know New York is different and having billions of dollars to your name probably plays a role in being able to make these observations from within your ivory tower, but wow. This is pretty damn bad.
"95% of murders are committed by young male minorities" Wow, I'm flabbergasted that this New York billionaire could be so freaking clueless..
Link

Yep, Bloomberg! Didn't see that one coming, did ya? Once again someone from the party of progressive projection gets the spotlight turned on them and we see actual proof of the BS and unsubstantiated sins they've accused their opponents of having in this case, racism and fascism! YAY! Go Democrats, keepers of equality and justice (my ass)... So Bloomy defends his city's stop & frisk policy by saying what the Klan has been saying for years, blacks commit way more crime so LEO should target them. Hmmmm.... how about all the accusations from the Left of Islamophobia slung at various GOP politicians who were focusing their attention outside the USA towards national security measures? Well, Bloomy's track record there would seem to be actually, well, Islamophobic...
www.theatlantic.com...


And he cannot be trusted to respect the civil rights of Muslims, as he illustrated after 9/11, when he presided over blatant religious profiling. Starting shortly after the attacks, officers infiltrated Muslim communities and spied on hundreds or perhaps thousands of innocents at mosques, colleges, and elsewhere.

These officers “put American citizens under surveillance and scrutinized where they ate, prayed and worked, not because of charges of wrongdoing but because of their ethnicity,” the AP reported, citing NYPD documents. Informants were paid to bait Muslims into making inflammatory statements. The NYPD even conducted surveillance on Muslim Americans outside its jurisdiction, drawing a rebuke from an FBI field office, where a top official charged that “the department’s surveillance of Muslims in the state has hindered investigations and created ‘additional risks’ in counterterrorism.”

How often have we heard Trump and other Republicans called "fascists" over well, over what, exactly? Championing the human rights of the unborn? Lowering taxes? Winning elections? Yeah, project your own sins much, Democrats?
Bloomberg, however, may be an honest to God fascist. Look at his track record.
On taxing poor people


Some people say, well, taxes are regressive. But in this case, yes they are. That's the good thing about them because the problem is in people that don't have a lot of money. And so, higher taxes should have a bigger impact on their behavior and how they deal with themselves. So, I listen to people saying 'oh we don't want to tax the poor.’ Well, we want the poor to live longer so that they can get an education and enjoy life. And that's why you do want to do exactly what a lot of people say you don't want to do.


Tax the poor to the point where they can't afford their vices or whatever behavior and habits you, as the fascist dictator find undesirable, then filter enough of their money back to them in the form of food and housing so they can still survive. Anyone who doesn't see the fascism in that, frankly, doesn't deserve a voter's ballot in this nation.


Speaking in Colorado, Bloomberg called for criminalizing transfers of firearms, increasing the age required to purchase firearms, a multi-day waiting period when purchasing firearms, unconstitutional red flag laws that allow the government to confiscate a person’s firearms without due process, and banning semi-automatic firearms.

What's more, Bloomberg cannot use ignorance as a defense against this, as he was educated on his Nazi-like behavior by Rabbi Dovid Bendory almost a decade ago. Bloomberg decided to ignore the fact shown to him by the Rabbi and continued his fascist behavior in spite of having been educated in the actions of the Third Reich where firearms were concerned.
dev.jpfo.org...


Mayor Bloomberg, have you studied Jewish history? Are you aware that the Nazis disarmed Jews prior to Kristallnacht and that those same Nazi gun laws are the foundation of the U.S. Gun Control Act of 1968? Are you aware that Senator Thomas Dodd asked the Library of Congress to translate the Nazi Gun Control Laws into English for him, and that he incorporated language from these laws into the Gun Control Act of 1968 that he authored? How can it be that you, a Jew, are enforcing Nazi-inspired laws?

Seems to me Bloomberg just might be the racist and fascist the Left has been searching high and low for the past few years. It will be interesting to see how they castigate or... conversely, how the embrace a man who is literally what they've falsely and baselessly accused Donald Trump of being. The world is watching and lack of consistency or any hint of a mixed message will likely leave the Left with their swollen red asses flapping in the wind for all to see.

ETA: a direct embedding of the audio of the Democratic candidate Mr Bloomberg claiming blacks commit most of the nation's crimes. and should, therefore, be profiled by law enforcement.

Bought and paid for.

He also owns his own propaganda network and can order his investigative reporters to report or not-report, based on his own whim.

originally posted by: 0zzymand0s
He also owns his own propaganda network and can order his investigative reporters to report or not-report, based on his own whim.

posted on Feb, 12 2020 @ 02:17 PM
link
He's an analytics guy. He doesn't care about race. His problem solving methods do in fact work or he would not be worth 60 billion but on some things it absolutely will not work. If it was a white trailer park community he would have taken the same stance.

As much as I understand that what he said in the past is now considered racist, wrong and vile...I just can't seem to believe he was wrong in some cases.


I didn't read your post yet, but OMG.
If there really are reptilian/human hybrids, that clip of Bloomberg is the poster child for it!
Holy Cow. The way his mouth is, his nostrils, the entire face. Paint it green, add some scales and that my friend is a
reptile! creeeeeeeeeeepy

As much as I understand that what he said in the past is now considered racist, wrong and vile...

The audio was from a conference in 2015. I don't think attitudes have changed that quickly.


originally posted by: 0zzymand0s
He also owns his own propaganda network and can order his investigative reporters to report or not-report, based on his own whim.

I'll let you guess who's quote that is...lol

posted on Feb, 12 2020 @ 02:41 PM
link
Imo....He's playing the role he was assigned.
To get Trump reelected.
Polarization to one party to avoid a third, to keep A party in power.
R&D's all party together off camera.
It's getting pretty obvious now.
The facist, the butt guy, the hair sniffer dog face guy and the communist.
Maybe they will bring back the Chinese server selling human trafficker for kicks now.

Ask yourselves why the Democrats haven't brought forth a viable candidate.
Gee, I wonder, not
They could find someone to act sane EASILY.
It's all a rigged joke.
Temp tax savings for the people, offset by tariffs, but permanent for corporations, red flag Trump the savior bs aside. 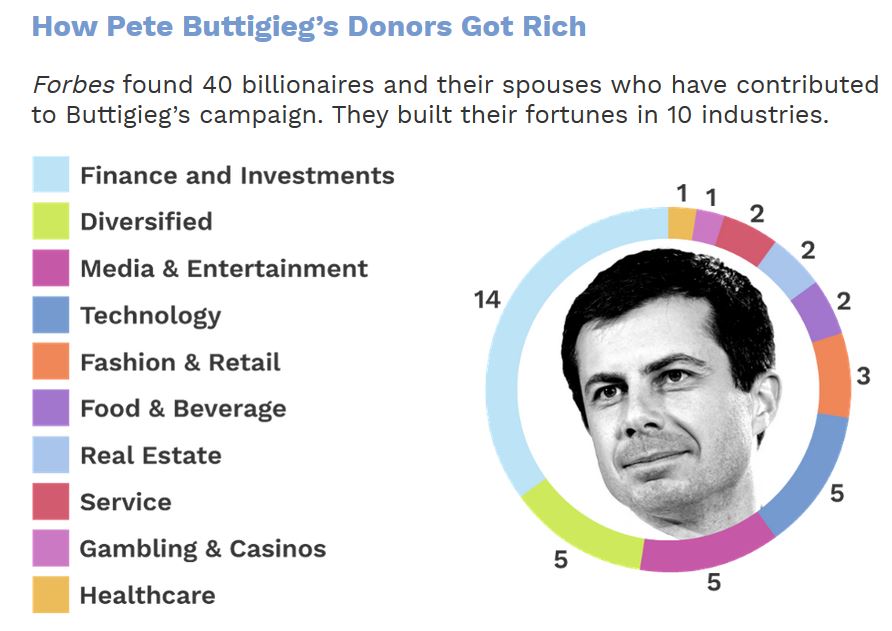 Sleepy Joe has 44 Billionaires donating.
Poking Haunt Us has 3 Billionaires.
Amy Blob of Tar has 21.
Creepy Banker Steyer has 5.
The only Billionaire supporting Gabbard is Jack Dorsey.

This is part of a series revealing the billionaires donating to Democrats running for president:
Here Are The Billionaires Backing Pete Buttigieg’s Presidential Campaign

Billionaires like Sheldon Adelson are footing Trump campaign.
Billionaire oligarchs got that comedian elected over in Ukraine.
Canada's Trudeau, same playbook.
France Macron, same.
Buttigieg is very similar to the above clowns.

It's all all a rigged joke indeed. When does the revolution start?? Too many sheeple still fast asleep.

Endorsing something is a little bit different than being the individual who signed it into and kept it as the law. I supported the war in Iraq, I did not support the idea presented that got us in there, but once we were there I saw no reason for the US to not proceed to kick ass.

I thought everyone already knew that.


Trump is known to strongly endorse stop and frisk in the past as well.

In the past? When did he ever disavow "Stop and Frisk'? Maybe the same time he apologized to the Central Park 5?