"Ms. Holmes demonstrated enthusiasm to abuse the legal system when she fraudulently filed a red flag affidavit besmirching the name of an honorable CSU police corporal," Sheriff Smith told the Coloradoan. "In doing so, she sought to deprive the officer of his constitutional rights."

But wait....I thought politicians who put these laws in place said that would never happen??? Because people don't LIE about "things like that," right?

The sad part is that this woman will probably get a slap on the wrist of filing a false report and maybe for lying. And if she can do it, then you know there are many others in line who will do it too....

This law should not be constitutional!!

This is gonna turn into a whole new "#MeToo" movement if they don't reverse that stupid bill/law.

posted on Feb, 5 2020 @ 02:32 PM
link
It is such a stupid law and it will be used vindictively...especially in the divided nation we live in today. 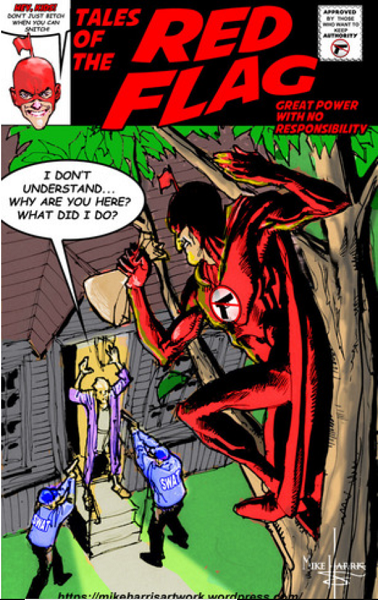 first of many, I fear

I agree, most of us are upset when we find out after someone goes on a shooting spree (or bombing or knife or car running over people) that there were signs before hand of impending action on their part. We say "why didn't someone do something before it came to this"?

Who, in their right mind, can't see the issue with the red flag laws? I mean, people make stuff up about each other all the time. My neighbor found out his wife was cheating on him, now he's fighting in court trying to defend his right to see his little daughter because his wife made up a story that he hit his daughter and knocked her down the stairs. If he had guns (he doesn't) she would have used that against his as well. People are vindictive.

Now, I mentioned early on that I am a democrat. I also own guns (yes that's plural), so maybe that is giving me a different outlook but man, this is a dangerous precedent that's being set.

Police can kill (generally speaking) without any repercussion (Getting fired isn't "Justice", and you're on drugs if you think it is), they can kill people ****while serving these red flag warrants****, they can lie to everyone and anyone....

...... But if you lie to get a red flag warrant/order issued for them, then holy $h!t, it's a statewide hunt to serve her with a warrant (and probably shoot her in the process.... after shooting her kid.)

So perjury is cool with you???

That, in its essence, is exactly what happened in this case. So, just an oops, eh??

Kinda like that gentleman who the cops shot, was it at 5 AM, while enforcing a red flag law. That, too, in the words of the Chief of police in that jurisdiction, was an "oops".

Yes, I've seen this happen so many times...on both sides, for sure, but more often with women lying about their exes and "weaponizing" the kids. I've also seen too many times where women warned about a violent ex and received a proper restraining order which really does NOTHING for you. Sure, if the perp happens to be around when police arrive, it might help...but it does NOT stop someone hell-bent on violence.

The only thing that will stop a perp is a gun pointed in their face.

If people really want to solve the problem of mass casualties, then allow honest, law-abiding citizens to become TRAINED and arm themselves to the teeth... A criminal is more likely to avoid violence if they think the potential victim can shoot back. This has been proven over and over again...

Anyone who works in law enforcement (and many without) know that criminals don't care about gun laws.... What we need is for the public to stop allowing politicians to hand feed them bogus statistics and actually use critical thinking skills to openly debate this topic on the local level. There is a history and a reason WHY the 2nd Amendment became the SECOND amendment as opposed to the 3rd, 4th, or whatever.... Being able to DEFEND yourself is a key component to FREEDOM.

posted on Feb, 5 2020 @ 03:53 PM
link
This is a very real problem. I'm about to file divorce papers and the second question my attorney asked, right after "do you have kids", was "do you have any guns in the house". He said and I agreed, get them out now. I live in NW Fl. and he said it has been epidemic since the Red Flag law went into effect here, after the stoneman school hoax. OK that hoax part was mine but you get the picture.

Only thing to stop a criminal is the no win scenario.

They see people as tools to their ends, period.

But I saw restraining orders working for lesser criminals...until the victims lift those because "he had a tough childhood"


Never, I repeat - NEVER - be alone with your soon-to-be ex. Always have a witness or two. Make all exchanges of children in a public location with cameras. Always record, preferably electronically, any conversation.... You don't even need to be discrete about it.... Have a recorder out in the open. If your STBX questions it, simply say "I'm just being precautious" or "it's for everyone's safety." Keep a written log of everything...whether you pay for anything involving kids, what clothes they brought and you sent back, everything.... ETA - I've even known people who take pictures of the kids every time they got them and what they looked like when they were returned to the ex.

You'd be surprised at how that might come up and in what context...

Who saw that coming? Completely out of the blue.

I am glad a warrant was issued for her. I can only hope a judge would do the same even if it wasn't a LEO.

First off, good to see you around. Hope all is quiet and nice.

But with regard to laws that don't seem constitutional, I am ignorant of a process that checks that. I hope someone filed a lawsuit, and it will go before the appropriate court. The current situation in Virginia comes to mind. It feels like it's about time to go over what the 2nd means and how current events might be a factor, in a legal setting.

originally posted by: seagull
a reply to: CIAGypsy

posted on Feb, 5 2020 @ 08:25 PM
link
This will be the only woman to be charged ever, since a cop was targeted.
Crazy exes, not so much.
Are we red-flagged for this website yet?
Give it time fellow frog-potters.

And she is not handling it very well. I wonder why non lethal force wasn't used in this scenario?

This does expose unique situation, when the person being red flagged is a police officer. It will be interesting to see which wins out in then end, the courts huge bias towards females or protecting the blue line at all costs. They are going to start feeding on each other as targets become scarce.

Maybe because he ran at a police officer with a knife? I wonder...