The point being made is that the 20k ticked over after 35days, not 11. 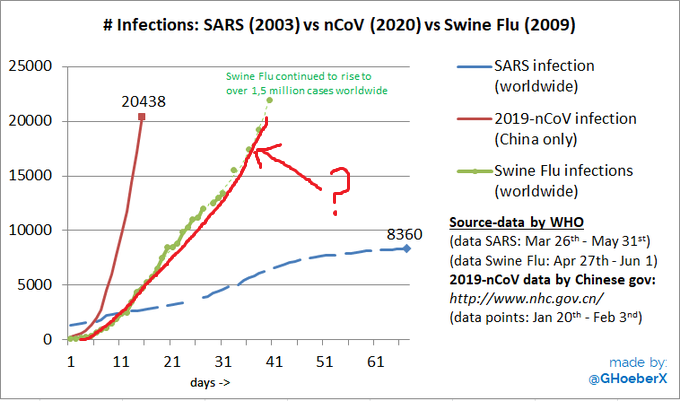 Are the quarantined cities self sufficient in terms of food supply? Even if they are, it would be tough to find people to bring food to market, people to sell it and people willing and able to venture out to buy the food.

Plus from what I know about China, they eat mainly fresh produce and meat (unlike the States where people have stock piles of canned and frozen food). Does the average person really have enough supplies to stay in their home for 12 days?

This could wind up killing many more people than the virus itself not to mention raising the fatality rate due to weakened bodies from starvation.

Would like to also thank the OP for hosting this thread. I don't post as much as I used to, or even visit as much but it's nice to see people I remember still active.

In addition to respiratory droplets, the novel coronavirus that has sickened thousands globally may also transmit through the digestive tract, specifically the fecal-oral route, according to a report.
Scientists from the Renmin Hospital of Wuhan University and the Wuhan Institute of Virology of the Chinese Academy of Science recently discovered “virus genetic material” in stool samples and rectal swabs from some patients, Chinese state media reported,

Maybe this is the missing link between why it's spreading so badly in China and not so much elsewhere, yet. Say for example, that the R-0 factor is much higher through the fecal-oral route than via airborne transmission and we may have an answer to why the spread outside of China doesn't match inside. It might be good news for the US, Japan, and Western Europe if so. However it's very bad news for India, Africa, the Mideast, Southeast Asia, and anywhere else that doesn't have well developed sanitation systems.

This week should be the tell. If the R-0 is as high as some fear we'll most definitely see some infections that don't have a direct link to one of the known at this point cases.

The thread has been moving pretty fast, and I saw that today.

When I see Trump,Pompeo or Pence with a mask I might get concerned

I trust the 2% number - and or better odds of surviving. This bug has a high morbidity (crippling people for long periods of time) and tying up hospital resources that would be treating other types of cases of equal or greater mortality.

That's the issue here. Overwhelming hospital resources. There are MANY MANY people who have this n-Cov, and I'm sure many people died of "unknown" causes which the CCP isn't counting..so it skews the number both ways.

Anyway, over 20k "official" cases now. This just seems to be getting worse, and the media isn't even hyping this up, for now...

China accepted US help with WHO involvement. That’s tacit admission they can’t control this.

So it’s a bioweapon release. Evidence strongly implicates accidental and China made it. I strongly doubt another country with means, Russia or US, has a motive that makes sense from an economic perspective. Why would US do this if China is buying up our debt and we want more favorable trade terms? Trump wouldn’t want China harmed because his economic success partially rests on China buying more stuff.

However China does have motives, many;

I read an initial theory that it was designed to release in Hong Kong to sicken the protestors and everyone else to pave way for full take over.

Remember the people who run China now, are the sons and daughters of the guys who killed at least 40 million during Cultural Revolution. They still preach core CCP tenets ala Marx, Stalin, and Mao.

My account is brand new, but i have followed forum here for many years.

Corona virus ? I dont get it.

Chineese govt reaction is not in line with a simple virus that kill 2% of the population. They seem to overreact.. There is something we dont get right now.

Now, they will spray all the city with desinfectant !

Apologies, I thought it was this chart that was in question:

Thanks for continuing the thread.. it's not often we need a 2nd volume to continue the topic. That alone proves this is an important current event that our community should continue to monitor

Not sure if this is the study mentioned, but it does parallel that in the following:

The digestive system is a potential route of 2019-nCov infection: a bioinformatics analysis based on single-cell transcriptomes - bioRxiv

posted on Feb, 3 2020 @ 07:42 PM
link
In the physician's lunch room today at my hospital (separated from the public cafeteria, for confidentiality reasons, in case we talk about patient information), there were a bunch of doctors eating. One cardiologist had been to Chinatown in Chicago this last weekend, and he said there were more people wearing masks there, than were wearing masks in the hospital - surgery included. The people in Chinatown were 'on edge', he said. The rest of us stopped eating for a minute, and looked at him. I could tell … there was a silent hope he hadn't been exposed, but nobody said anything. But, we all kept talking about the issue. The culture in the United States is far different than in China. Hopefully we can 'slow this thing down' so that it doesn't overwhelm our hospital(s), but more than a few of us are thinking it will come to our community. We are a 3 hour drive south from Chicago, Illinois. Ugly stuff.
edit on 3-2-2020 by Fowlerstoad because: changed a phrase to better reflect this

I'm in a holding pattern on panic mode.

I've been following your threads on this topic, I've been busy, but time enough to read and this is worrisome and may shed some inferences...

Note that clinical laboratories should NOT attempt viral isolation from specimens collected from 2019-nCoV PUIs.

At this time, diagnostic testing for 2019-nCoV can be conducted only at CDC.

I'll look for the article that also states the CDC is developing kits for the US, which means we do not have any...

I've been watching for market reasons with work.

posted on Feb, 3 2020 @ 07:49 PM
link
I’m at home with wife now. She said Chinese dissidents all talking about Xi Jinping is ill or has some serious health problem. It’s rumor but I find about 50% of time they get things right.

This may explain US involvement as someone more moderate from the standing committee calling the shots now. Li Keqiang being VP, does not assume command in China.

Is it engineered to affect the genome of Chinese persons over & above the genome of persons of non-Chinese heritage? We all know that can be done, it's been possible for decades - but who the heck would have done so, unleashing something so chaotic which might evolve to affect persons of all genetic background?