"For all of these reasons, I am declaring a public health emergency of international concern over the global outbreak of #2019nCoV."- @DrTedros

The infection rate compared to SARS/Swineflu 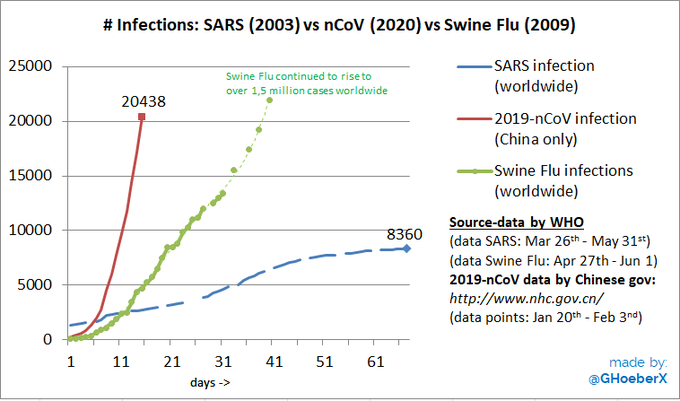 China has completed construction of their 1st Emergency Hospital/Quarantine facility. It took 10 days and has started taking in patients. Many are questioning the need for bars on the windows and doors that do not open from the inside:

These numbers are not considered accurate for a number of reasons:
1- Hospitals may have reached the ceiling number on tests per day
2- Test kits are in short supply Link
3- Large numbers of people were turned away from hospitals and not tested
4- It can take up to 4 tests to show infection Link
5- CCP is pushing hard to limit information

The international infections appear to be contained, for the most part. Although its still too early to sound the all clear. Germany is the exception, one lady visited a German company from China and it has resulted in 12 infections. This is the most significant spread outside of China to date. 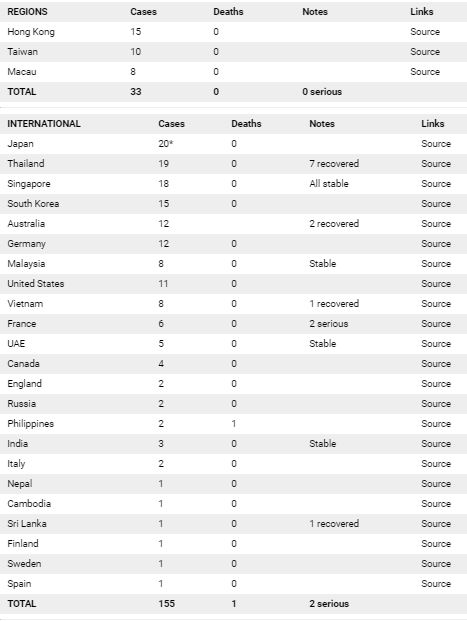 There is a lot of discussion about the origins of the virus still - some claim its bio engineered and the live food market in Wuhan isn't the source. However, there's no real proof either way of this yet.


Dr. Francis Boyle, who drafted the Biological Weapons Act has given a detailed statement admitting that the 2019 Wuhan Coronavirus is an offensive Biological Warfare Weapon and that the World Health Organization (WHO) already knows about it.


Multiple airlines around the world have cancelled all flights to China. There are far to many to list, but you can find them all here: www.businessinsider.com.au...

Multiple countries have enforced border security on Chinese visitors or people who have transited through China.
WHO and China have lashed out at this as unnecessary.

There is a cruise liner under quarantine due to infected people onboard in Japan
The 2nd ship in Italy was given the all clear.

Chinese stock markets opened yesterday for the first time since the outbreak and dropped significantly. This occurred even though China implemented 2 significant trading actions:
1- No Short Selling
2- Injected $US170 billion in liquidity 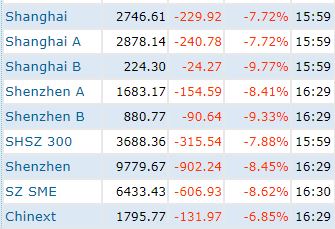 Thank you Agit8dChop for Hosting this very important thread.

I would say from that info there are 155 confirmed cases 1 death and some social experiment in China that has gone pear shaped,until I see numbers climbing outside of China take off Im not panicking. China killed 70 million under Mao so they do accept large losses for social agendas...which in this case is God only knows,watch the markets is all I suggest if public perception turns to panic that will go south big time.

That's the biggest head-scratcher. The differences between what we're seeing in China as compared to the rest of the world. It's really confusing.

since the virus was detected late last year.

Sorry I have to back to see who asked that question. But you know who you are.
edit on 3-2-2020 by crappiekat because: (no reason given)

posted on Feb, 3 2020 @ 06:52 PM
link
You do know that everything stated is mostly a wash , rinse , repeat from all the previous times , yes ?
Although it appears the Chinese government has improved their way of taking care of such .

US Senator Tom Cotton has compared this to Chernobyl


Is R Tom Cotton a member of the medical field , or a politician ?
I looked up the wiki.
Definitely a politician.

The WHO delcared a global health emergency on Jan 31


That's what they have done in the past , what they need to do , and what they are supposed to do.


Would you want to go if you didn't show symptoms ?
No , I wouldn't either.
But , it is the right thing to do.

I could go on.
But back to my gaming.

Obsession is a terrible thing to waste.

originally posted by: NOrrTH
When people start dropping outside of China, the # will hit the fan. I'm holding my breath this week.

People will die outside China, the real question is if we will see infection and hospitalization rates that start to match what they have going on in China. Further, what will be the rates of unhospitalized infection?

The video I posted to the last thread had a rough timeline of an average of about 5 days incubation (13 is the extreme limit which is why they're giving everyone a 14 day hold in quarantine) before symptoms develop. Once symptoms develop, there seems to be about a 7 day period before you know if you are going to need hospitalization. In other words, people who go the hospital have already been ill for an average of 7 days.

If you get better inside that window, then it seems like you are going to be fine for the most part barring a sudden secondary infection.

Sure seems like the fog of war has settled in though.. China is already pretty smacked Output wise with ripples of unknown dimensions. And OPEC.... troubles looming....Let's hope all sides are at least cooperating, which is a real stretch.... I'm still hoping for the best because the alternative is unacceptable....
YMMV

On January 19, 2020, a 35-year-old man presented to an urgent care clinic in Snohomish County, Washington, with a 4-day history of cough and subjective fever. On checking into the clinic, the patient put on a mask in the waiting room. After waiting approximately 20 minutes, he was taken into an examination room and underwent evaluation by a provider. He disclosed that he had returned to Washington State on January 15 after traveling to visit family in Wuhan, China. The patient stated that he had seen a health alert from the U.S. Centers for Disease Control and Prevention (CDC) about the novel coronavirus outbreak in China and, because of his symptoms and recent travel, decided to see a health care provider.

Side note, a few days ago at Google Scholar, there were only 18 published papers regarding, 2019-nCov. As of this posting, there are 193.

OP, thank you for continuing this thread!

China has suffered its worst day of the coronavirus outbreak, with 120 people dying in one day. The death toll from coronavirus in China has risen to 426

What's up with that chart?

You said there's 20k cases as of today?
But the chart wrongly models nCoV as reaching 20k from zero in 11 days??

This virus got out in December, it should be at least 60 days in by now.

If we correctly modeled it's time frame it'd be spreading slower than swineflu.

Who the hell made this chart and why are they saying there were no cases of nCoV as of 11 or 12 days ago?

Either I'm missing something or these statistics are being abused and incorrectly modeled.


China has suffered its worst day of the coronavirus outbreak, with 120 people dying in one day. The death toll from coronavirus in China has risen to 426

So 100% of all reported fatalities are in China?

Looks correct to me. It's a classic exponential growth model. It starts with 27 cases on Dec. 29th, which stayed steady until 41 (or 14 new cases) were reported Jan 16th.

Technically speaking, China claims Patient Zero was identified Dec. 1st... but they did not identify the virus until December 29th, so the model begins with identification of the pathogen.

posted on Feb, 3 2020 @ 07:17 PM
link
I don’t recall anyone mentioning this yet. I would keep an eye on the U.S. presidential campaign rallies. Once they start canceling tour dates or no show then you know something is up. No way they would put themselves out there if they felt a real threat.

As a side note: People worrying that 5g is causing the outbreak or making it worse well...apparently that is nothing new. Back when cholera was spreading people worried that it was electricity in homes (lightbulbs) had to be playing a part.

Still not sure what to make of this mess yet.

There's been 1 death in the Philippines.

There has been one death reported outside of China:

Three more cases of the new coronavirus were confirmed in the U.S. on Sunday, all in California, bringing the total number of people in the country with the disease to 11. The weekend also saw the first death blamed on the flu-like illness outside of China.

As of Monday evening there were more than 20,000 confirmed cases in more than two dozen countries, the vast majority of them in China, according to the World Health Organization. There have been at least 425 deaths in China, and one in the Philippines.