posted on Jan, 27 2020 @ 05:30 PM
link
Sorry, I was waiting for you to list out reasons why you thought Bryant was sacrificed from the title of your OP, not list other celebrity deaths without outlining any connection between them and this.

Not discounting the possibility, just the evidence (or lack of) presented by the OP.

That is one crazy coincidence.

Not really. He was known for using a helicopter a lot. There was a better than zero chance of him being involved in a crash.

Your link is dead.. but I believe this is what you are referring too
m.youtube.com... 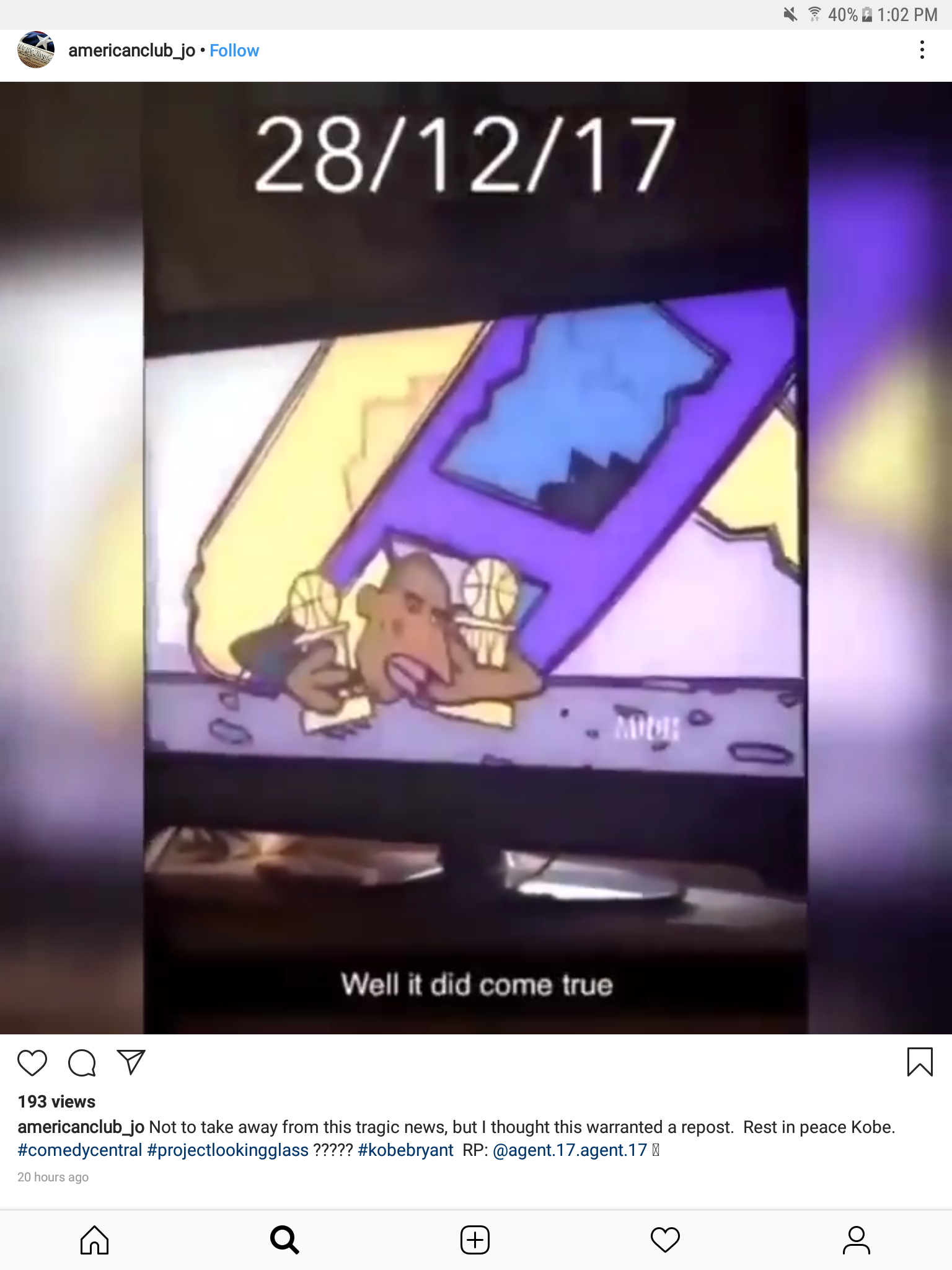 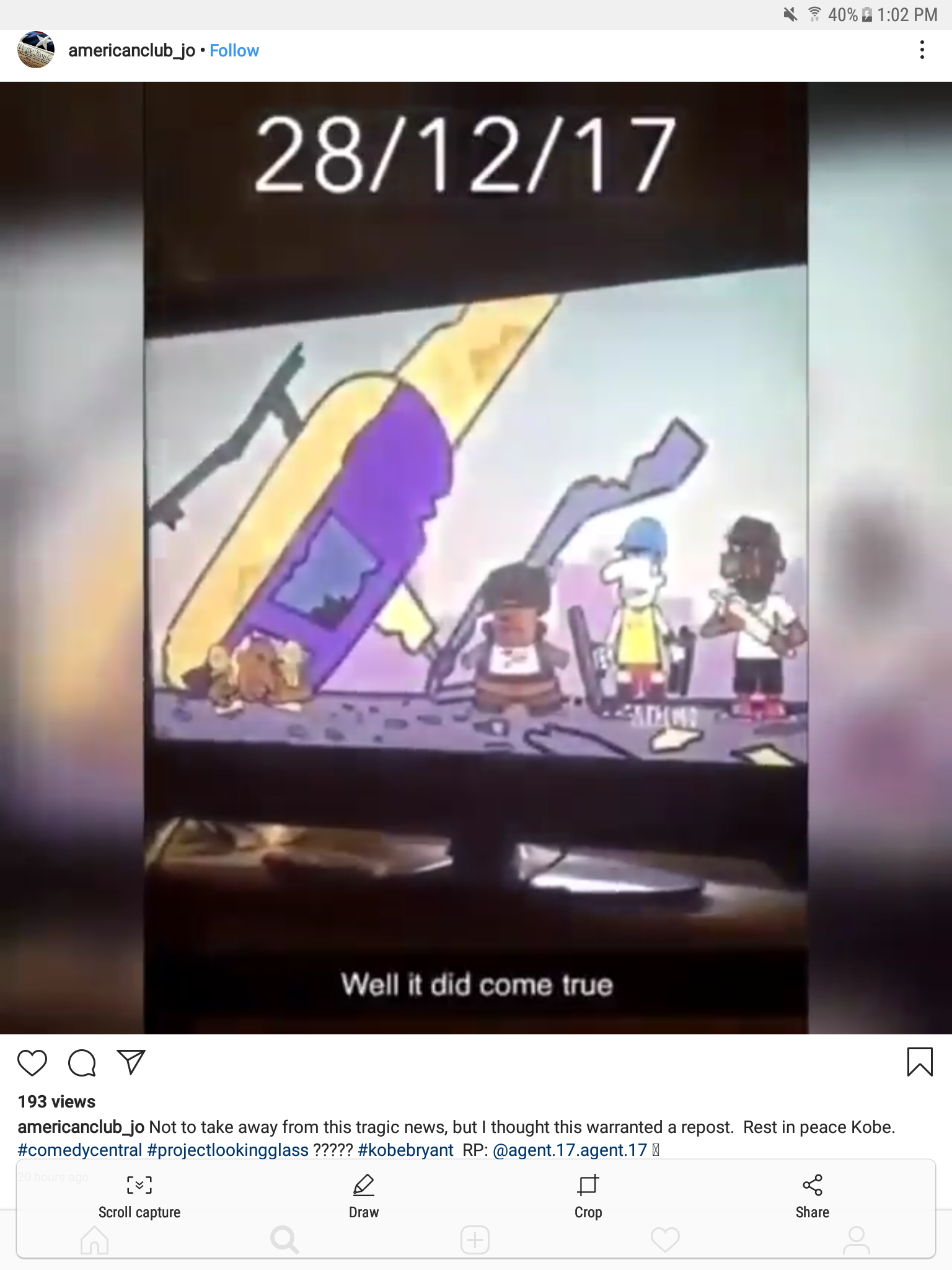 Roll the dice enough.. eventually you strike it.
This As Well

Part of me say's, Fog,Destiny..# happens

The other part of me say's, coincidence is the truth's very very good Attorney.

Thanks mate. Yea Youtube probably took it down (or someone did.)
Here is another commentary by highimpactflix

From Google, the plot overview:


A sex tape gets leaked and causes a global Internet blackout, and the Legends must find a way to survive the apocalypse; Milk cashes in on his pirated Chinese satellite connection, which gives him the last Internet connection available.
Show: Legends of Chamberlain Heights
Air date: November 16, 2016
Previous episode: Cane and Disabled
Next episode: More Than a Video Game

posted on Jan, 28 2020 @ 02:07 AM
link
Anyone who saw the fog in socal Friday, Saturday and Sunday would not have thought about getting in a helicopter, people were barely on the freeways and everyone said it was the worst they had even seen. I think the pilots experience and desire to be professional and get his boss and his friends to an important event led to him getting in over his head, there was a rumor he pulled an emergency climb to avoid terrain and basically fell out of the sky.

Or it was the KKK, can't be having no billionaire, religious sports hero that's a good dad and black, get him.

originally posted by: KKLOCO
a reply to: SoulSurfer

Your video is broken. Here you go.

That is pretty crazy. I’m still going with coincidence.

This cartoon about Kobe has a deeper meaning to Kobe's death.
Kobe yells "Pass?" right before the chopper explosion.
Kobe's known to shoot more than passing the ball because of his confidence and ability to score so well.
But it gets spookier.
Lebron James now a Laker, just a day before the crash, he passed Kobe's #3 in all time scoring list.
Kobe dropped to #4 now, and #4 in Chinese means death.
James after losing to the Philly's that night, had an interview mentioning of Kobe and Gigi.
There's a video about that interview on youtube.
btw Philly is Kobe's hometown.

The black kid with the headband on (wearing catcher's mask here) is a die-hard Lebron's fan.
He even talks and looks just like Lebron himself.

Gotta say it had crossed my mind that he most likely had contact with the dark side of the Hollywood industrial complex. Maybe sports isn't as compromised as entertainment is, but the more rich and celebrated the biggest stars get, the more they probably become targeted by the illuminati. There was that hotel helicopter crash in LA that had links to Adam Schiff and NXIVM. But I think this was just a case of a bad decision on Kobe's part to go up in unsafe flying conditions and a tragedy ensued. Now we can watch the spectacle they make of his death and everybody lining up to profit it from it despite the tears.

posted on Jan, 28 2020 @ 09:21 PM
link
If this Washington Post reporter had said something bad about President Trump, she would have been eligible for one of the silly journalist awards.

But because she Tweeted something negative about Kobe Bryant after he was killed, she was fired within hours.

posted on Jan, 28 2020 @ 10:38 PM
link
Mothman was piloting the helicopter ! Chupacabra was on the ground aiming a cat laser into Mothy’s eyes ! The Bray Road Beast took control and landed the helicopter near Sasquatch’s California hideout ! They scuttled the helicopter and all got on a Nazi UFO and are aboard a US space carrier on Mars ! Saturn ate its children and will imprison the sick elite in monoliths ! The Lesser Key of Solomon was found in the helicopter’s ignition ! So I would definitely say he was sacrificed to EL .
edit on 28-1-2020 by SulfurMercurySalt because: Spelling

Fog is invisible to most ground base radar because it occurs at very low altitudes and the chopper was flying too low for the ATC to see it , let alone detect the loss of signal and scatter that fog can produce if it is seen.

Fog occurs in temperature inversions, and those CAN be detected in busy aerodromes like the LA area, and a NOTAM should be issued specifying the likeliness of fog.

I do not know if that weather anomaly was announced, because to an ATC and pilot, it means to be on the lookout for fog.

Not intending to being judgmental, however better judgement on that day by many involved, should have weighed the value of the souls on-board against attempting to fly in soup like that, in a helicopter, when the distance was 80 miles on a land route.

It's not that ridiculous if you look into it. I am not claiming to be correct on all levels but, you can't prove me 100% wrong.

It is very difficult to proof faul play... There will sure be a thorough investigation on the helicopter and sure they will find the problem which caused the crash... But then there is stuff which is beyond most of our understanding... magick..or magik..or how ever it is written. That is the tool that these satanist are using to get what they want and to please their master. I am not into this stuff but what I do know is that it is used by those worshipping "evil" gods who use humans in the flesh to distroy everything created and dear to God. It is He Himself warning us in the Bible not to use these unholy tools... which indicate that they do excist and work. That is if you believe in God.. And if so it is nothing other than properties of nature we do not understand ...yet.

Saying this you can be correct that Kobe has been sacrificed for some reward in return... But how can you ever proof this ever happened without the ritual master stepping forward and admitting why, how and where he did his ritual.. but even then it will take some serious proof and convincing it is the reason why Kobe had to die.

the rational question is why ? [ they voice that opinion ]

did bryant have " history " of refusing to abort flights - that should have been abort ?

was mr bryant a risk taker ?

The Title of my OP is "WAS Kobe Bryant a victim of Ritual Sacrifice"..Presented as a Question.

I thought that may inspire some to look into it.

Good Post, It should attract any open thinkers. Timing is everything.

All your points are valid, risk taker he was.

For me, it still doesn't counter balance the timing.

The Grammy Awards are Evil.

I found this interesting.

posted on Jan, 29 2020 @ 11:24 PM
link
I gotta just chime in wjen you look at all the pieces that are being pointed out across the net i find it so hard to think it wasnt a fake death or a sacrifice
Sorry. I know thats thr really deep conspiracy sh!t people get turned off by...