Inside the horrific, inhumane animal markets behind pandemics like coronavirus

How about some made in the USA Grain Alcohol at 175 proof. I had some back in college and began chugging it before they ripped the bottle from my hands. I had a Moon Shot from my Bed, saw Jesus and then visited the Porcelain Gods Bowl for hours before getting the poison out. Can you imagine three Guys at the same Porcelain Gods Bowl all blowing chow at the same time.

I wonder what I would have become if I was born a snob.

I never went there but I believe you in your entirety.

I’ve pretty much seen all that including videos of people eating live mouse babies.

I can say this; I’m a healthy and clean person and I was sick more in China than in the rest of my life including my first and only overnight hospital stay in 2013.

I had lung and stomach viruses, an ulcer caused by bacteria from meat, viral pneumonia and an adverse drug reaction from a banned drug sold to me 1 yr after it’s ban by a high end pharmacy.

My wife is Chinese, she never gets sick. Benefits of growing up in that environment, my kids were born there and they generally don’t get sick.

originally posted by: Waterglass
So a life long registered Republican who voted for Trump is weird and has bizarre hobbies? No your way off. Strange how your allowed to write personal attack stuff like that. I also voted for John Kerry. I play Golf, basketball and watch football. I dislike anything NASCAR.

Weird? Well go work in law enforcement and sleep with a loaded 9MM beneath your pillow for 10+ years, escape one assassination drive by then write me and tell me how you feel.

So how do you get a pass?

What I know is that I can still laugh.


Oops...I was being light hearted and teasing with you. Did you miss the smiley? I actually think it's pretty cool that you did that with the roaches just to see what would happen. The "weird" comment was just a poke and a chuckle.

posted on Jan, 26 2020 @ 01:15 PM
link
My wife was talking to me about this that on Facebook there are tons of pictures of this market. It is basically an illegal "wet" market of animals of all kinds. The thing about bats is it seems Ebola came from bats so good luck China...geez

Sorry. My brain saw a snarky smiley. It happens now and then.

I need to write about my experience as a 2009 post major stroke survivor in [3] hospitals for 32 days and how it affects you 10 plus years later. I went to back work after being released from the hospital after 30 days. I wanted to survive. The stroke really messes with my brain. I also screwed up in another thread today in that my brain saw a number one versus the actual 3.

In brief the stroke was result of [6] separate sports concussions and not obesity or clogged veins. I write on ATS to keep the brain neurons firing. It wont make them grow but it will maintain them as best as possible. I can walk and run and I play basketball weekly to keep coordinated. All of this really pisses me of as I wanted to enter the Senior Olympics for the 100 meter dash. I cant jump but I was a fast white guy. Still am. I did attend an NFL free agent tryout back in my 20's as a wide receiver. My nerves got the best of me so no NFL.

I like all of your threads and agree with same.

originally posted by: lakenheath24
When I was in Kunsan, they ate the same snip. Mamasan would choose a piece of meat and dude would shoosh the flies iff before cutting said piece of meat off.

And the chicken wagon....holy bejeezus. Craziest thing ever.

But after several OB beers and some green slime, you dont care what you eat later.....and the dog aint bad from what i dont remember.

I spent a year in Kunsan and I never ate dog. They do have a breed that they eat, kind of hairless and looks almost pig like, so ya they eat that as a delicacy but it cost a lot more than beef so it is not like they will slip you some in pretense it is beef.

If you want to see crazy sh!t go to Thailand where they have black scorpions and giant millipedes to deep fry along with other delectables lol.

I also been to many markets as you suggest with meat hanging freely out in the open streets. The deal there is that is how they can tell how fresh it is as they been doing it that way for like 1000 years in those places. The funny part is they do not sell ground beef unless you buy the meat first then watch them grind it to avoid mixing tainted beef with ground beef. There are a lot of subtle things like this at 3rd world markets that at first you see it and say WTF and then it all makes sense.

Then you have China that is truly WTF as with what they do there, and being a very experience world traveler I'm not going there any time soon.

In my opinion - a lot of this BS is nothing other than a Chinese version of 'blood libel'.

We've seen it before with the 'fetus soup' crap and similar tabloid like slander against the 'bad guys'.

Now they're the 'real big bad guys' - because thanks to Corona (which has a patent and was designed in a lab) not something 'grown' in fetid conditions in some so called torture-alley-food-orgy-gore location in China.

Use your head. Many countries don't use refrigeration for their meat - I lived in one for a couple of decades, at the meat, and never did I or any friend or relative of mine get sick.

I lived in China after the iron curtain fell, and in Hong Kong after the handover in 1997. Most of the things that you are talking about aren't every day food. They expensive, and the dishes that they make are difficult to cook. The main ingredients are only sold in a handful of markets. Many if which are illegal.

They're like those underground markets in New York that sell sharks fin or the exotic pets.

Don't think that average chinese eat like this regularly. Maybe only if an important person come to dinner or on an important occasion.

I went years and only ever saw things like this on televion. These aren't normal to eat. Like dog you hear about it but don't actually eat it.

Its like saying Americans eat bear, or other rare animals.

If it's an endangered species, it's on the menu.

No critter too rare not to deep fry. Or boil. Or eat raw. Or still alive.

I don't understand what you wrote. Not trying to usurp you but I saw what I saw and so did dozens of others. I was there.

I stayed in westernized hotels. The food was excellent. We were taken to an "old school" restaurant because in business you may have had to eat a traditional Chinese dinner so they prepared us for it as to not eat it would be a sign of disrespect. Sorry but the food sucked and that restaurant was packed with 100's of native Chinese at other tables eating the same stuff. That was back in 2000 as in 20 years ago.

Use my head? It is what it is. Its on video as in real time today. So you didn't get sick. What is your definition of sick as explosive diarrhea may be normal for you? So The New York Post is not on the up and up.

At least The New York Post didn't sell out did they.

The video is the video. It is what it is.

I must be getting old.

I thought about this and you could be telling the truth. Especially if you lived in a westernized compound, hotel or US embassy compound in China. I long for those days back on a Friday evening all you can eat King Crab Legs dinner at the Officers Club at the Marine Corps Base Hawaii, formerly Marine Corps Air Station in Kaneohe Bay. Ah yes and the Macadamia Nut Hot Fudge Sunday was to die for. Sure we don't eat what the natives eat. However, we work and live over there and never got sick as we were vital to The National Security of The United States!

Have a good day!

There's non-cold storage for meat in Europe, and then there's China. They are not the same bird. Where everyone else take precautions like clean surfaces and NOT letting meats of different animals touch, they think nothing of cross contamination, like it's a myth. When food poisoning sets in, oh well, can't be the food, must have caught it from a person (from my stepmother's lips there)


It's not the animal source of the food that would prevent me from eating anything other than McDonald's or western MREs if I ever went to China -- pretty sure at some point I ate dog in Korea, considering we literally bought our dog at a meat market there -- it's the Chinese disregard of the necessity for cleanliness with raw meat that would.

originally posted by: Waterglass
a reply to: ABNARTY

originally posted by: queenofswords
a reply to: Waterglass


There are people in this country that eat some pretty obnoxious things. I met an old lady years ago that told me she cooks possum quite often with sweet potatoes! 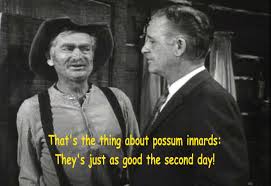 China banned the trade of wild animals on Sunday until the coronavirus epidemic has been eliminated across the country, after evidence emerged that the disease was transmitted to humans through a market in the city of Wuhan that traded in game meat...

The new restrictions ban the transport and sale of wild animals, specifically barring markets, supermarkets, restaurants and e-commerce platforms from trading in any form.

Possibly the only good thing to come out of this.

How telling that this desperately cruel and environmentally destructive exploitation of live wild animals is abruptly ended (temporarily) only when human wellbeing is at stake because of it.

posted on Jan, 26 2020 @ 06:09 PM
link
This is a topic which upsets me so much that words fail me and I just want to crawl into a hole and die.
The cruelty and inhumanity is beyond my ability to comprehend.

I've known about these practices for a long time, and have always felt hopeless and helpless to be able to do anything about the atrocities committed by a people on the opposite side of the world.

BUT, I knew this sort of thing (deadly virus) was likely to happen due to these filthy, unsanitary practices.

Maybe there is some chance that this will lead to more Chinese realizing this and they will adopt more humane and sanitary food sources. But I doubt it unless billions die. Which I certainly would never hope for.

Anyway, the world can be such a horrible horrible place and I fight with deep depression every day because of things like this.

Some of you will probably think I'm over stating how this effects me. Or think I'm just a snowflake or giant baby. But there is nothing that haunts me more than this crap.