That study was based on a sample of only 461 victims. All of them were severely ill enough to show up at a hospital for treatment meaning they were that bad off to begin with.

41 is a bad sample size for anything because it is extremely limited, and this population is only selected from those who sought medical treatment at a hospital, meaning they were already desperately ill.

At most you can say that if you end up hospitalized for this, your chances of dying go up to around 15%.

yes they are Undead hordes
just waiting to kill

posted on Jan, 27 2020 @ 07:20 AM
link
Feel bad for you guys in Australia, you have a front row seat and the govt reaction is to do nothing but say avoid large gatherings? Is that accurate?

Philippines has 2 suspected cases under observation.

WeChat videos have slowed to a trickle. The wu mao army out in force upvoting positive “hero” posts all over. Big censorship now.

Serial poster for content on Twitter, Harry Chen PHD at Beida Uni hasn’t posted for 6 hours. Or his news “service”. Think he got grabbed. It’s not a fake account and dates back to March 2019.

I’m off to work, I’ll know more about my states response as we have a case dang it.

No virus "wants us dead". They simply want a nice place to replicate.

If they mutate too much to get more deadly, they burn out because they kill faster than they spread.

This one is actually close to the "sweet spot" by current accounts -- mostly survivable so it can spread readily because it's not killing its hosts for the most part and nicely contagious so those walking wounded are taking it to nice new homes to infect.

Mutate too much and it leaves that goldilocks zone. Spanish Flu stayed relatively stable long enough to spread all over the world.

So many of these information articles, not peer reviewed yet because no time, have such small sample sizes, that are biased with many underlying chronic diseases. There are a few that are seemingly healthy but that happens with any infection.

We should expect them to have increased infection, illness and mortality rates compared to the United States or Western Europe.

Once it starts spreading in healthy populations, then we can start to worry.

You explain it with a disease that while not necessarily going to kill mass amounts of people will wipe them out for a long time all at once.

In order to maintain a functioning social structure, including government, you need a certain number of people able to work and maintain their capability to do their jobs. This stuff comes through and hits a high percentage of the same and take them out for days/weeks at a time, killing a certain number yes, but incapacitating the rest ... and you have a risk to the function of society.

Normal illnesses might take out the number who are going to die from this and in a trickle.

This doesn't have to be a ton of people dying for it to be a serious strain on normal order and threat. People too sick to work are as bad as people dead when it comes to work not getting done.

see how the day plays out


What is a port? You mean (after a quick google) an implant that allows for immediate IVs to be applied? If I did, I wouldn't be asking how to do this...

posted on Jan, 27 2020 @ 07:46 AM
link
a reply to: all2human
I kinda wonder why they are only interested in the people who were within 2 meters of his seat on the flight? Aren't they saying this is transmissible even when there are no symptoms?? What about:

Lots and lots of questions. This guy from Toronto did not go to Sunnybrook hospital until the following day to which he was taken by crews wearing hazmat and is currently in a reverse ventilated room? Why would they only be concerned with such a small circle of contacts?

originally posted by: SpartanStoic
People are begging Trump on Twitter to refuse flights from China.


What people? Proof, or it didn't happen.

I think any passengers connecting anywhere who started in China should be stopped for US, UK and EU. Russia has porous border with China but they should do same.


Maybe... wish we had more actual facts, rather than videos that appear to show massive panic but are then shown to be from years ago.

Anyone wanna collaborate on backdating and tracking coverage/reports/article for a timeline?

Not sure if y'all remember I ran the 'List of People-Eating-People' thread back in 2012. You guys have done a wonderful job, I'm never on here anymore...but thread made me dig up my password after 5+ years..

originally posted by: Bicent
I want confirmation it spreads airborne, I have been waiting for that info for a long time. These doctors should know by now. Also what is the cdc and WHO doing in regards to analyzing this virus, to work on a vaccine.


Whats with the calls for a vaccine?

How about a simple cure for those who actually have already contracted it? Stop the spread, no vaccine needed.

Vaccines for things like this are a total, 100% waste of time. Why? Because even if one was made that actually worked better than 20%, one week later, the virus mutates, and you have to start all over again.

No, I'd rather not play whack-a-mole with people's lives.

ASSUME we are getting the info blackout now by all GOVERNMENTS. If they confirm it spread airborne additionally to surface, I won’t be surprised..


Lets not ass-u-me that the apocalypse is on us just yet, ok?

originally posted by: Kenzo
a reply to: Hellas
Yeeh , quite worrisome..

Well im am going to prepare, and everyone should know vitamin C effects

Thanks, what I've been saying since this started...

I'm going to keep my eye on some key stocks as my ticket count is low today at work...

originally posted by: ketsuko
a reply to: Hecate666

No virus "wants us dead". They simply want a nice place to replicate.

If they mutate too much to get more deadly, they burn out because they kill faster than they spread.

This one is actually close to the "sweet spot" by current accounts -- mostly survivable so it can spread readily because it's not killing its hosts for the most part and nicely contagious so those walking wounded are taking it to nice new homes to infect.

Mutate too much and it leaves that goldilocks zone. Spanish Flu stayed relatively stable long enough to spread all over the world.


I used my language on purpose. I know how viruses work and that they don't 'want' anything. Sorry for a bit of humour.
What my message really should have told you is that I replied to someone who said that he/she isn't bothered because it's 'only' a harmless virus and we should just go 'meh'.
A virus you describe that burns itself out eventually can or will [depending on what the virus is doing] drag thousands [or more] dead people with it. If it kills quicker than it's contagious it's still bad in my books. No?
Also it's not just death that is bad, what about commerce? I am already not ordering my weekly parcel from China until the situation is sorted.

What about all the people that don't go to work now? Is all food delivery still going? Etc. A pandemic like this is something to take serious even if it isn't yet or ever will be a deadly plague. Like you will take it serious when a child that says it's being molested and not go 'ah shut up, a lot of times kids just make stuff up'. You know erring on the cautious side.

Your thread sounds like and interesting read. I'm gonna go check it out over a nice hot cup of Ye Ming Sha, I like it frothy like a cappuccino.

What about the flight crew who welcomed on board at the door and served him in flight and EVERYBODY else on the flight?

Its the flight crews who are likely to become supercarriers as they board their next flights POTENTIALLY carrying contamination to that flight too?

Or from a previous flight where they got infected and are still asymptomatic but also capable of spreading the virus to every flight they are on (do the same flight crews work together each time?)

Or the security people who frisk everybody on exit entry again potential super carrier/spreaders?

It seems to me that many flight staff will be already infected over the past week or so and as they are not showing symptoms yet will still be working and mixing with other flight crews at the airport thus spreading it wider.

It's something I have brought up before but nobody seems to talk about it and to me is possibly one of the quickest most efficient ways to make it (or any othe outbreak) global more quickly.

this is pretty serious when China is shutting down their market... they have been doing everything possible to stabilize their markets and try to compete with the US dollar and bond markets... 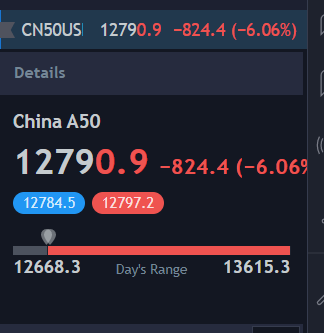 China's market is going to open 10-20% down on it's next opening day... hold on to your seats people this # is going to get interesting

posted on Jan, 27 2020 @ 08:02 AM
link
a reply to: toysforadults. I know nothing of what you just wrote lol. Do you know how much damage has been done to their economy so far at all?