China health authorities in Wuhan as of 4.30pm, Bangkok time released figures showing the death toll is now 91, with one new death in the province of Hainan (an 80 year old woman) and the rest in Hubei. The number of infected has risen to 2874 with many new cases emerging in Beijing, Shanghai and Chongqing. The authorities said that 426 individuals were in critical condition while more than 32,175 people were under observations. 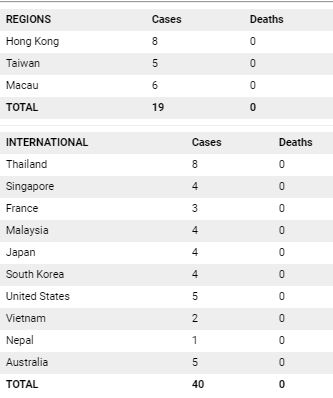 Stock markets are all in the red, Keep in mind its a public holiday in China so their markets are closed as are Australia's today. 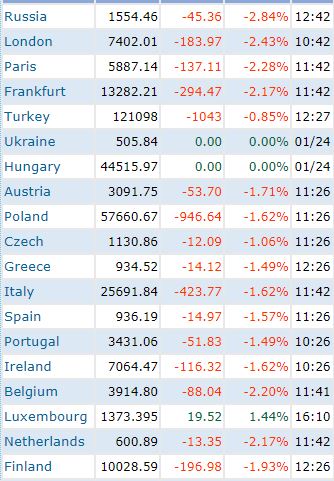 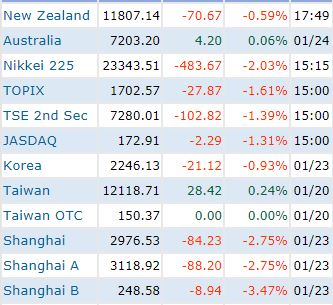 posted on Jan, 27 2020 @ 05:11 AM
link
I heard somewhere a few days ago that the exact virus loose in China was discovered by Chinese military scientists in 2018, isolated from a bat. It has likely sent to, contained within and worked on at the level 4 lab in Wuhan. I am awaiting further information from my son’s friend, but nothing new for over 24hrs now. a reply to: weirdguy

originally posted by: ARM1968
I heard somewhere a few days ago that the exact virus loose in China was discovered by Chinese military scientists in 2018, isolated from a bat. It has likely sent to, contained within and worked on at the level 4 lab in Wuhan. I am awaiting further information from my son’s friend, but nothing new for over 24hrs now. a reply to: weirdguy

The closest DNA match for the 2019-ncov is Bat SARS-like coronavirus isolate bat-SL-CoVZC45. It has a 95% match and it's DNA was sequenced and submitted to the gene database by a Chinese military hospital/ university, on 05-JAN-2018.
The genome can be found at this link. www.ncbi.nlm.nih.gov...

The genome for 2019ncov also called Wuhan-Hu-1 was submitted to the gene database on 05-JAN-2020, by the Shanghai Public Health Clinical Center & School of Public Health. And also submitted on 17-JAN-2020, by National Center for Biotechnology Information, USA. The genome can be found at this link. www.ncbi.nlm.nih.gov...

This is not a biological weapon, numerous genetic labs around the world have DNA samples and/or copies to help develop vaccines and assays. If I was going to weaponise a virus it would be Ebola or Influenza.

posted on Jan, 27 2020 @ 05:33 AM
link
Can anyone post if they've seen or heard of any affected police or military personnel - file this under information thats missing from emerging picture.

originally posted by: AdmireTheDistance
a reply to: CthruU
Care to place a wager on that?

Supposedly no flights out of Wuhan.

originally posted by: hiddenNZ
a reply to: Agit8dChop
Please don't say it's transferable on surfaces,we have only had 2 packages in the last 6 months from China,4 days ago.


Best case without sanitazion is 5 days... optimal conditions gives it up to 28 days survivability.
Best if cold, 40degrees C and up cuts it down a lot.


originally posted by: St Udio
a reply to: KindraLaBelle

Overall, 98% of the symptoms were fever, 76% coughing, 44% muscle pain or feeling tired.
With 98% showing fever, this means that one out of 50 people infected will show no fever and therefore easily bypass current screening methods that are practiced by health officials.
If one in 50 infected people is able to get through screening that’s primarily looking for fever and respiratory symptoms, it means this outbreak is highly unlikely to be contained

I had all of those symptoms.

Either this flu shares symptoms with others that are currently running around or I had the Wu flu.

It really doesn't matter either way to me at this point as I have survived it and am on the mend.

Then go volunteer your blood for possible antidote. You may even get it named after you and get on GMA.

originally posted by: weirdguy
Does anyone know if they eat bat turds in China?
I'd guess yes, but I want to be sure.


Leung said his team’s research showed self-sustaining human-to-human transmission was already happening in all major mainland cities and warned that a pandemic may be close. “We have to be prepared, that this particular epidemic may be about to become a global epidemic,” he said.

If you are looking at china's decisions from an economic standpoint, you will be dumbfounded. There's no reason for china, economically, to do a number of things that they do (currency manipulation, take a year and a half to give some concessions in a trade deal, impose tariffs on US goods as "retaliation," crack down on hong kong, etc). China is about control not the economy. The quarantine makes perfect sense from this PoV.

originally posted by: gps777
a reply to: weirdguy

Maybe then you should have read the post better. Your link 404`d, but your trying to link to the HQ which I agree is the address you posted.
Emphasis mine.


Not sure if related to coronavirus stuff or not. Came across this list of Soros owned companies, didn't see anything called WUHAN MEGA PLAGUES, but saw WuXi PharmaTech Inc., figured it was close enough.

Turns out they have a Wuhan branch.


Click the links to Soros owned companies in his post, whether its linked or not to the coronavirus IDK. You`re more than welcome to call it BS or prove otherwise.

You expect me to believe a blog called tinfoilcowboyhat.com... I don't think so

posted on Jan, 27 2020 @ 05:55 AM
link
The mistake most are making is believing that media reports and therefore their links to said reports are credible.

Ground zero reports are the only true gauge at this point. So therefore - what has happened to social media at ground zero?

And - why is the Wuhan Mayor offering his resignation?

That's really nice at the moment. I am so glad. Bad news is that viruses mutate, really quickly. The more people have it the more likely it becomes. It's what they do.
Now maybe this one won't. Maybe it's a laid back virus that doesn't want us dead. Yay.
Not to consider the very likely fact that viruses CAN and most often WILL mutate however is a bit naive.
What else is experience for if not to repeat mistakes of the past?
I would always err on the side of caution.

posted on Jan, 27 2020 @ 05:57 AM
link
Yesterday I posted that there were two suspected cases of the virus in Toronto, Ontario, Canada. In fact, so far only one case is suspected.

Where you getting your figures?????? The media?

Do you believe everything your told by the system?

Anyway, you believe what you want. Fair enough.

viruses aren't sentient murderer's they don't have the desire to kill you. They're a living organism that simply tries to survive. The virus mutating won't really change the symptoms much. The flu virus mutates multiple times per year, yet the flu symptoms remain constant. The mutations are small but significant to your immune system's ability to recognize and kill on sight.

This coronavirus will mutate but the mortality rate will not change significantly. It'll sit between 2 and 4 percent. 3,000 is a plenty large sample size to determine mortality rate so long as the group of 3,000 is of diverse ages and health levels.