4 deaths outside of Hubei province
1 more case confirmed in Australia, about to be identified 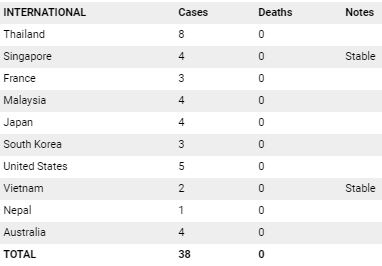 explains why Canada arrest that woman or whatever they did

Hi, this is more accurate : fork.lol...
your link is missing 2 days of data. Cheers.

originally posted by: celltypespecific
Its time to panic....


I went to Walmart and CVS no MORE MASK AVAILABLE!!!!!

Someone is buying all the mask in bulk!!!!


While out shopping I ran into a group of asian females wearing masking.

Later I ask the store clerk about their stock of mask they said people have being coming in all weekend to purchase mask!!

originally posted by: DjembeJedi
Looks like it may have been that lab after all..
"The deadly animal-borne coronavirus spreading globally may have originated in a laboratory in the city of Wuhan linked to China’s covert biological weapons program, said an Israeli biological warfare analyst."The Washingto Times

If so...then definitely an accident (never s#*t where you eat).

BTW...with a 3-4 week shelf life on this virus...would money be infected?
I saw a vid with a collapsed victim surrounded by his money and nobody tried to take it.

yeah well sorry i run my own nodes i used that link because i dont open my explorer to public . But nice link for others ! !
edit on 26-1-2020 by Dolby_X because: (no reason given)

Any link to a source about that news ?

Same here, I visited several pharmacies and hardware shops and all were sold out. It got to the point where the store clerk laughed at me as I walked in asking.

I managed to find 3 packs of 5 masks 1hr drive away - but they were the last ones too.

You could add your name to the list, but they were not expecting any deliveries until Feb.

if it was the case social media should be flood with video of thing going better but nope you only get state made video.

They can't risk it. Open the media to anything and they allow the bad to get out too. It makes them look not in control. They'll trot out their occasional propaganda to make it look good -- like the patient they "cured", but that's it.

We also don't know what they're allowing to circulate internally on official channels.

Too many people getting sick. Too much bad stuff. You act like everyone who gets it dies. That's not the case, not with any disease. It's very easy to count deaths. Not nearly as easy to count the survivors especially as many will not have gone to any hospital to begin with. They won't have needed to.

What you have is something that infects a lot of people very quickly, makes many sick all at once badly enough it's hard to carry on routine, and it will about 3 to 4% of those it sickens. Those it takes will die about as quickly as it sickened people.

That's a lot of sick people all at once. A lot of people who will need medical care, and a lot of people dying rapidly. Even though the overall percentages of the total population may be low, it's enough to be a scary thing and to overwhelm medical infrastructure making the situation worse. It will seem to be the end of days.

Pretty sure N95 masks are primarily for those who are already sick, reduces the area/range from sneezing and coughing.
just a heads up.
I work with these all the time,practically useless against particles this size.
you would need a half face-piece respirator with an organic vapour cartridge minimum, full even better

posted on Jan, 26 2020 @ 06:26 PM
link
a reply to: IAMTAT
No clue really other than the panic has gone full bore and money doesn't matter atm. People are freaking out over there.

This entire site is a wealth of information, there were a few gaps I wanted to fill in and I just started replying in a few spots. There are many subject matter experts on here and I love learning from them. Figured interacting was the best way to speed up the process, plus if I get something wrong I can learn something new.

My civilian background is in medical research using animal models, not pharmaceutical evil stuff, university and NIH backed studies that work to change genes using CRISPR and retroviruses in living animals to stop diseases like CF and epilepsy from expressing. We also have studies blocking receptors with new medications that will starve out viruses from reproducing like HIV. My job is regulatory, biosafety and bio containment etc.

I’ve been in the National Guard for 12 years as a medic and have been an instructor, training and certifying them for 5 years. I’m transitioning to become a medical officer, I have not decided whether I’m going the PA or MD route but will most likely become a physician assistant and continue teaching and move to healthcare on the civilian side. Whatever the army will pay for once I reach that moment.

My undergrad is in the health sciences, it’s basically a generic pre masters in health sciences or pre med degree. I’m working on a masters in informatics, analytics and epidemiology. MPH degrees are too common and the more data focused healthcare ones are MS programs.

Not that any of that really matters, I’m just a name on the internet. I’ve met people with PhDs who were morons and others with no degree who were remarkable. Experience and credentials don’t always equate to knowledge.

I’m doing all of this for my family, mostly my son who has epilepsy that is slowly turning his midbrain into scar tissue making him more prone to having medication resistant seizures, surgery could destroy his limbic system and memory, aspects that make us human and I want to learn as much as possible to help him.


Excellent post welcome aboard we will need your insights in the next few days.

posted on Jan, 26 2020 @ 06:28 PM
link
Medical question for medical types...
Will individuals currently fighting another variety of flu have more or less resistance to this particular CV?

I can't find any reliable information or information I trust so it's like nobody really has any idea what's going on... I even have a hard time speculating...

Pretty sure N95 masks are primarily for those who are already sick, reduces the area/range from sneezing and coughing.
just a heads up.
I work with these all the time,practically useless against particles this size.

That is correct.
Corona viruses are very small. 0.12 microns, N95 masks are not effective as they can filter particles larger than 0.3 microns. nCoV-19 goes straight through all the commercially available masks.

originally posted by: IAMTAT
Medical question for medical types...
Will individuals currently fighting another variety of flu have more or less resistance to this particular CV?

That was something husband and I posited this afternoon. For that to have any chance at all, it would have to be another coronavirus, and at best, it would confer a resistance, not full immunity. People who maintain close contact with animals would be most likely to have come into contact with other strains of coronavirus.

But basically, it would really depend on how similar the receptors on the virus in question are to the antibodies your body has circulating that it developed in response to the other strain. If your body recognizes it as something you've dealt with before and produces antibodies that can partially hamper it, then you would get a lesser illness.

The fact that they'rye calling this "novel" suggests the scenario isn't terribly likely though. That says part of the problem the current victims are having is that their immune systems are causing problems on top of the severity of the disease because they've never seen a strain of coronavirus like this one.

Thanks.
I had assumed with a person currently fighting a common flu...the body's immune system was already ramped up to present a more vigorous resistance to new infection.

If you were sick with a similar coronavirus your body may recognize it more quickly depending on the antigens expressed by the pathogen. Influenza not so much, your body randomly generates immune cells to attempt to bind to unrecognized pathogens. Good news is your body can produce a response to millions of different antigens daily, it’s a race against the replicating pathogen to gain adaptive immunity from your T and B cells. Your innate immune system will fight the pathogen in the short term, usually destroying infected cells that signal they are infected, it’s these cells that present the invading pathogen from broken down infected cells to the adaptive cells so you can build an immune response, stop the pathogen from replicating and eliminate it from your system.

Once you are immune and it’s eliminated most of the cells combating the infection self destruct with a few sentinel cells remaining in lymphatic tissue, circulation and marrow so you can quickly eliminate the infection in the future, unless it mutates and external proteins on the pathogen substantially change and you start all over again.