Kimchi and coffee for breakfast ?

There’s an entire section devoted to Steve bannon? That’s kind of surprising and or strange?

I’m never good at deciphering what comes out about China because they’re so censored...


I’m on mobile or I would do more. I also should be asleep. Too involved i guess. This thread has tons of great info, thanks to everyone for sharing what they can find.

Praying for the best.

This is the person behind 'gnews.org

At the peak of his career, he was 73rd among the richest in China. After falling out with members of the Communist Party leadership, Guo was accused of corruption and other misdeeds and forced to flee China. He fled to the United States in late 2014[8] after learning he was going to be arrested after allegations against him including bribing, kidnapping, money laundering, fraud and rape,[9] and is subsequently subject to an Interpol Red Notice.

A study by the Australian Strategic Policy Institute which analysed the tweets of Chinese government controlled accounts banned by Twitter in response to the 2019 Hong Kong anti-extradition bill protests found that the accounts had distributed more material attacking Guo Wengui than any other target including the Hong Kong protestors. Other dissidents targeted by the bot network included Gui Minhai and Yu Wensheng as well as striking PLA veterans.[54] In another report posted by South China Morning Post, the researchers found that more than 38,000 tweets from 618 of the now-suspended Twitter accounts targeted Guo.

Hard to piece together, but being the cynical bastard I am, I wouldn't take things with less than a few grains of salt.

Guo is said in the above-linked wiki article to be, "good friends," with Bannon.
edit on 26-1-2020 by jadedANDcynical because: added info

I had a chance to review the treatment history during the SARS outbreak in the early 00. I find it really sad that we are not more prepared for this epidemic. I won't even go into the diabolical side of where this virus comes from , if and where it was made, or whether it indeed it was a virus stolen from Winnipeg, as is now being reported.

All I really want to say, is that for those in the medical profession who frequent this site in the persuit of unfiltered information, which ATS was once a bastien thereof, please look to the lessons learned from our first encouter with SARS. At that time no Vaccine was available and so massive antivirals of all sorts were hurled at patients with little to no success. Also, much of the treatment consisted of a reactionery approach, with forced breathing apparatus and lots of IV antibiotics. None of these methods really worked, and those who survived were those who were able to survive the time period required for the bodies natural immune system to cope.

Genetics played a large role, as some with favorable respiratory characteristics were able to stave off fatal hypoxia during the massive fluid build up in thier lungs. Unfortunately, the one course of action that was negligent during the last outbreak was the most drastic, and would have probably been the most effective. Treat the infected premptively for complete lung failure. Immediate and short term introcution of extracorporeal membrane oxygenation (ECMO/ECLS).
Introduction of Oxycyte and Adrenomedulin. Then Wait
Some have suggested IV Vitamin C and Vitamin B along with the above, but most patients drowned in their own fluids. The risks warrant the possibility of long term kidney damage.

Save the brain, let the body do the rest.

Thanks.also. I find it easy to believe the theory of a weaponised virus more than not at this point.

yeah bro..
Or the airport.. lots of Chinese will be flying in!

China's Agriculture Ministry has banned trade in wildlife nationwide to curb the outbreak of the deadly coronavirus. Wild animals consumed for food are believed to be the source of the outbreak.
The ministry banned trade in wild animals – alive or dead – in markets, supermarkets, restaurants, and e-commerce platforms, as well as the transportation of wildlife. It also ordered a quarantine of all places where such animals are bred, it said in a joint statement with the Forestry Department.

posted on Jan, 26 2020 @ 01:59 AM
link
a reply to: Agit8dChop
Fuuu....hope you are rural man ,lots of fresh food around then. It's all a bit worrying NZ has done nothing yet, anyone that has the attention span of a squashed fish can find the info that msm doesn't show. I don't get it.

posted on Jan, 26 2020 @ 02:00 AM
link
So according to Chris Martenson the guy in the YouTube lnked (he says he has a PHD in pathology) this virus is worse than you think. For a number of reasons:

1. It is new to humankind. No humans have an immunity to it yet as we have never been infected by it. So it will sweep through the population quickly.

2. It is a cross species jump. He says that DNA sequencing has been done on it and it is a bat virus that went through a snake, mutating with snake bits, and jumped to humans.

4. This is pretty lethal. Imagine the worse flu you had x2. People older, and really young are specially susceptible.. Case fatality is around around 3%, if that remains, 16 million in the US can become critically ill, and around 3 million in the US dead.

There is a window of 9-14 days before you get sick, and can be infectious the entire time.

Chart from first video explaining stages to a full-blown pandemic and which stage we are in right now: 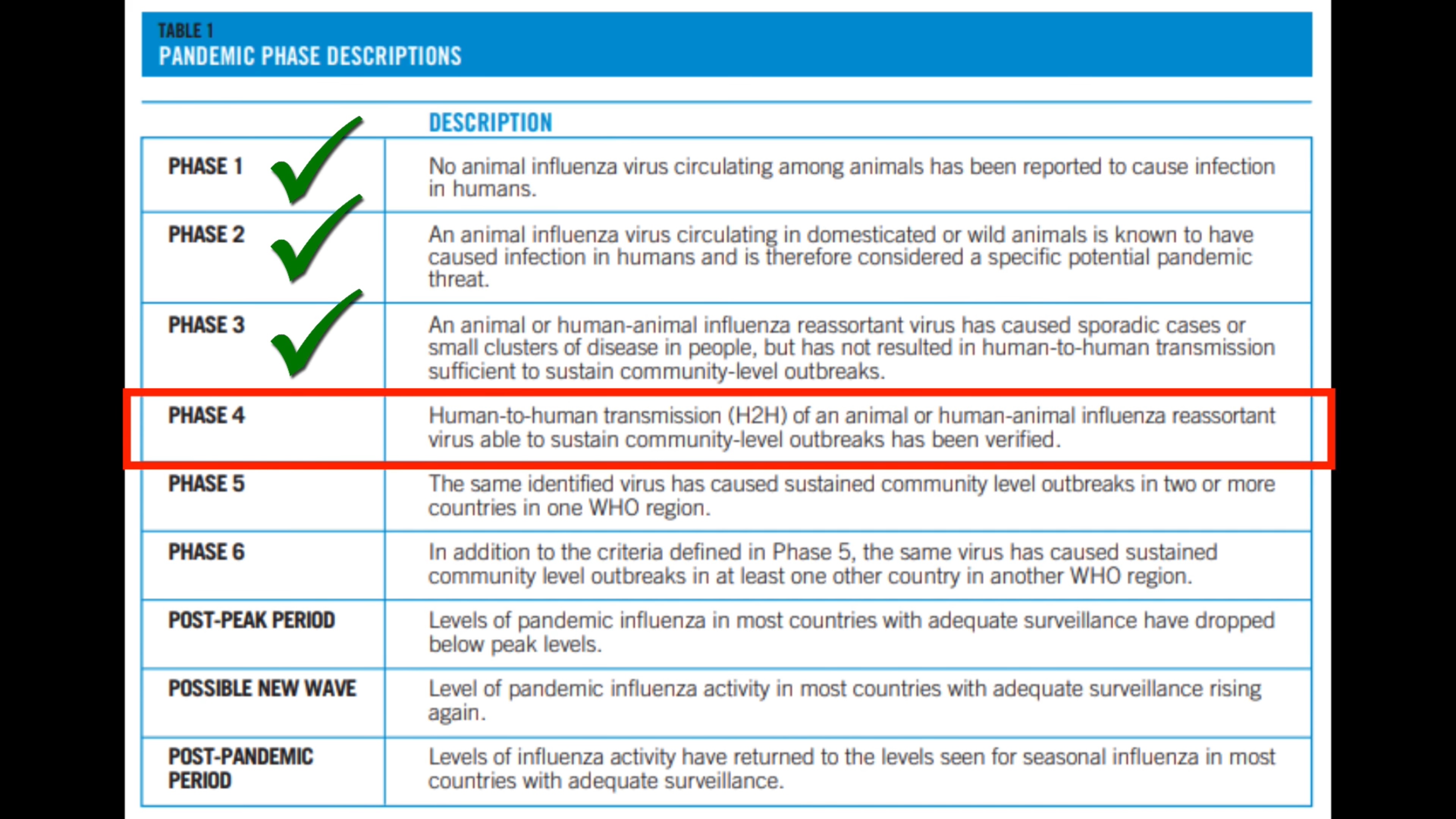 Direct Link to Pic it can be hard to read since so much info is on it.
edit on 26-1-2020 by SimpleIdea because: (no reason given)

Unlike #SARS, the coronavirus can infect people even if its carrier shows little or no symptom: Ma Xiaowei, head of the National Health Commission #WuhanCoronavirus

damn.. not good!
2 week incubation period and you're infectious before you show symptoms..

so all those people who were on the plane or in the airport when the flights from Wuhan landed could have been infected and infectious even though they appeared fine and healthy...

It"s going to spread,with this many infected unless they find an antidote in time i give 2-3 weeks until actual shtf scenarios become very real.
unless you enjoy line-ups and shortages, calmly prepare now is all i can say
be safe people
edit on 26-1-2020 by all2human because: (no reason given)

This is why I keep saying we will know a LOT by this time next week. The WA patient flew from China to WA January 15. Using the 10-14 day incubation period cited, anyone he potentially infected will start seeing symptoms between yesterday and mid-week. Symptoms seem to be mild cold/flu for a few days, then improvement followed quickly by pneumonia. If I had been on a flight into SEA-TAC last Wednesday and had the sniffles today, I'd be crapping bricks right now.

That's where I'm at as well... majority of infections are from people who came from Wuhan - they've been quarantined with their families. If we start seeing pockets of people infected who were simply on the flight or in the airport.. then we're looking down the barrel of something significant
edit on 26/1/20 by Agit8dChop because: (no reason given)

"Incubation ranges from 1 to 14 days

Ability of virus to spread growing"

AND now it's officially being stated that it can be spread within the incubation period.

If that's the case then I can't see how this WON'T be a global pandemic. There is NO way to track down something like that.