originally posted by: SpartanStoic
a reply to: Argen

Very normal this time of year for many Chinese people to travel to hometown. See my posts earlier in thread.

Yes. I would assume close to that amount of people traveled to Wuhan also.

They are playing with numbers and the meaning of words.

If you let a lot of people die before officially counting, less people to infect when you do officially start counting.

We are missing to many puzzle pieces.

STILL no results from the 2 suspected cases in University of Miami, Ohio, no updates on the one near Vegas, or Seattle,

I think the Ohio ones are way overdue and we're likely to hear those first. Hopefully negatives but even so, if they aren't testing them multiple times they may get a false negative (there were a number of cases where individuals had 2 negative tests and a 3rd positive test


Ohio resident here - The CDC has 100-200 samples to process TOTAL right now. Miami sent on Tuesday and it's a 24-36 TAT on the tests. It's now Sunday. And we expect China to process thousands per day??.

I'm guessing they are controlling the narrative here, and getting things set before announcing alot of positives. Or trickling it out..I'll be surprised is the Ohio ones come out negative at this point. If they do great!, if not - they are really delaying the positive ones.

Completely off topic but hey if it makes anybody else smile
edit on 2-2-2020 by johnb because: removing dble word

posted on Feb, 2 2020 @ 12:20 PM
link
This is our Canadian Minister of Health. A great example of why I have no faith in how our government is handling this. The context is they are talking about the flight that will bring Canadians home from Wuhan. 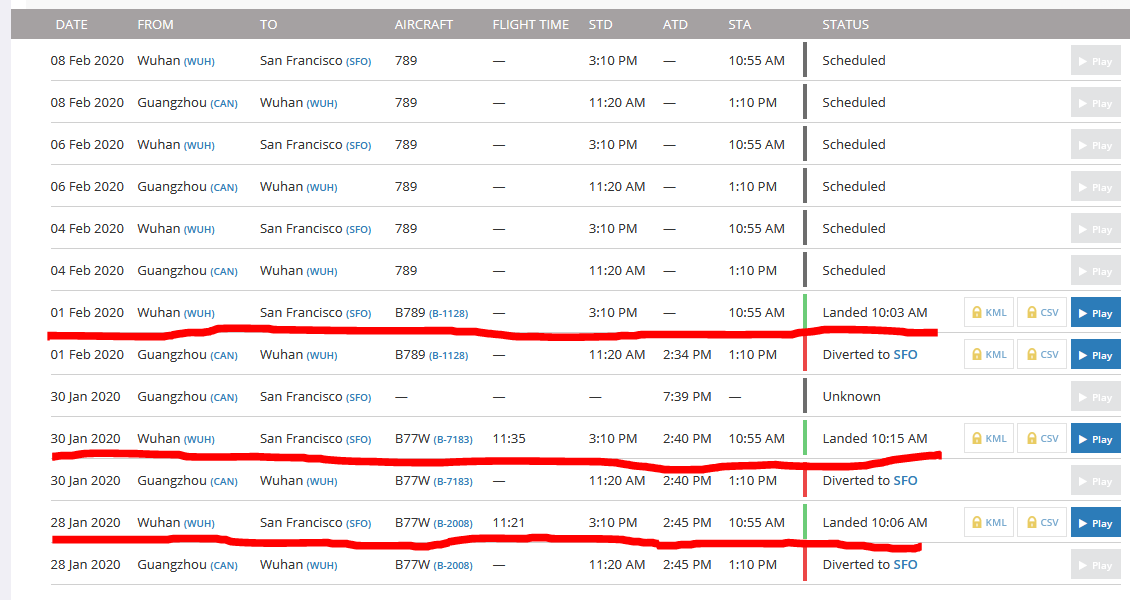 On Friday, January 31, officials confirmed another case of coronavirus in the Bay Area, involving a man who had traveled to Wuhan and Shanghai and arrived in the US January 24th- seven days earlier.

U.S. citizens who have visited China’s Hubei Province within 14 days before reentry to the United States will face a mandatory quarantine, while citizens returning from other parts of mainland China will face advanced screening and a self-imposed quarantine to monitor their health. U.S. permanent residents, immediate family of U.S. citizens and permanent residents and others exempted from the entry ban are also expected to be subject to quarantine."

I need to do some math here, but what this means is direct flights from Wuhan, let alone indirect routes, have been occurring largely unabated for some time now into the US- specifically California.

I hate to say it, but San Francisco and LA will be ground zero for infection spread. No way we got lucky with that much inbound travel. The next two weeks are going to be very stressful.

If I lived in those cities, I'd up my timeline to be worried.

Hope for the best, but expect the worst. I wouldn't ignore this.

originally posted by: NxNWest
This is our Canadian Minister of Health. A great example of why I have no faith in how our government is handling this. The context is they are talking about the flight that will bring Canadians home from Wuhan.

What the hell? I get the impression she's thrilled to be in TV land
where the virus can't touch her. Maniacal


This is a very troubling video. Some of it was already been released, but includes commentary this time along with a visit to another hospital. At the end it shows the censorship police raiding the video producers home.

It is more evidence of a strong campaign to deceive the public on the reality of the situation.

ketsuko, agree with you on the frequency of these events. What I find curious is how many times since the end of World War II we've been presented the idea that these diseases "start" in China, yet during a horrific eight years there, it didn't seem to happen on a large scale.

Probably nothing, but thinking about it was one of those "hmm" moments.

My divorce came through in Feb last year.

I guess that means I must be totally over the cow, it hadn't even registered.

On a side note - you git for reminding me.

I saw people getting a bit freaked over the idea of it having an immunosuppressive element. This is addressed here and why that tends to happen. It's a natural function of the type of infection you're getting. The cells it attacks in your respiratory tract are an important part of your body's defenses, and when they're the target of a virus and then your own body moves in and helps eradicate them in order to wipe out the virus, that part of your body is left exposed to secondary infection.

It's a function of population density ... both of people and of animals.

The Chinese are big believers in fresh food, and that means they want to go to a market and see it butchered right in front of them. So you have the kind of interactions needed to pass these bugs around. You have all the right body fluids interacting on a daily basis amplified because of this cultural prediliction, amplified because of the high, high population.

And then you have the Chinese cultural liking for eating darn near anything that walks or crawls for one reason or another. They don't grow everything. A lot of it is wild caught, and again, it has to be fresh. Wild animals harbor disease where domestic ones can be medicated and kept fairly disease free.

You have the same types of interactions in Africa with bush meat.

For whatever reason, South Americans seem less prone to this.

This video tried to estimate the actual number of fatalities due to the virus based on data from the crematorium operating hours. It was current for the 29th January where the official infection count was about 6000 people. An estimation of 600-800 people dying that day was made.

From this information along with other reports, an estimation of 100 000 infected people was made.

I am actually very depressed/shocked/dumbfounded by the fact that Wuhan a city of 11 million people is literally about to collapse yet no one seems to care....

That fact is what should be to most disturbing.....

What I'd like to know is what happened to the 5 million that left before the lock down ?

JHU press release about the development of the dashboard:
hub.jhu.edu...

Save this Preparedness and Response Plan offline and share with your local docs and hospitals:
www.hopkins-cepar.org...
Also
www.who.int...

I was told about it on Friday by the same source who told me about the York one a day before it was announced.

I guess they don't want to announce it over the weekend so people can stew on it because thousands will not go to work on Monday and probably have the week off.

So it'll be between 10am and 11am Monday morning after people have already gone to work - might as well keep on going for the rest of the week then.

Let's see - I was told Sheffield.

posted on Feb, 2 2020 @ 01:32 PM
link
Video apparently showing a lorry trying to break through and escape quarantine zone full of people although there's nothing in the video to really show that is true but what it does show is what bad shots the police are. I don't think they play cricket in China.
twitter.com...
Edit to add this YouTube video shows them getting out of the lorry at the end. youtu.be...
edit on 2-2-2020 by tarifa37 because: (no reason given)
edit on 2-2-2020 by tarifa37 because: (no reason given)