president has said the nation faces a "grave situation" as the coronavirus spreads.
Xi Jinping told a policy meeting, aimed at looking for measures to fight the outbreak, that the virus was "accelerating its spread".

THE STOCK MARKET is going to crash on Monday, this is a certain fact.

Look for Bank runs this weekend or Monday.

And *that* is exactly the sort of panic we don't need.

Do you know what is worse than the disease? The collapse of social order because of it. People who need not die will then die because people run around like chickens with their heads cut off screaming "Weesa gonna DIE!!!!!"

Stop being part of the problem.

A star for you

posted on Jan, 25 2020 @ 09:45 AM
link
China claims the first person to have the Coronavirus is cured and left the hospital. A lot of pomp over it, he talks about how they cared for him and shows all the doctors who helped him. He is like just one person.

While videos on Twitter or showing crowded hospitals and wide spread panic.

I guess everyone who doesn't die from it, is cured.

Perhaps the first guy was an important biotech researcher and got special care?

While I know that the above is totally off-topic, but I think it's important to realize that it isn't just that the virus attacks us, it is what our body does in response. Only one person in our home has had the flu vaccine in the last 5 years, and it is my wife who got one in October. Yet my other daughter and myself didn't get sick with the flu. Typically, the pattern in the home is one of the daughters gets it, then I get it (since I work from home) and then either my wife or other daughter gets it. But usually 3 out of 4 of us gets sick. But not this time.

Your post got me wondering if this could have been a bad batch (or contaminated batch) of a flu vaccine. I presume the Chinese have flu vaccinations? Might sound daft but there are worse conspiracies going round.

posted on Jan, 25 2020 @ 09:48 AM
link
The virus and it's potential implications is being taken seriously at the administrative levels at hospitals along the west coast.


originally posted by: weirdguy
A second 1300 bed makeshift hospital is going to be built in Wuhan.
twitter.com...

A SECOND HOSPITAL BEING BUILT...?

This is NOT normal folks.....this is unprecedented....did not happen for ebola, SARS, MERs, etc....

It has to be a weaponized coronavirus accidentally released from the high security Biolab located in Wuhan.


The way the Chinese are reacting and in conjunction with what Xia Ping has said - which is again far from normal, we are in a situation far more serious than currently reported. The level of response in China is mind blowing. They know some thin they aren’t saying, I’m almost certain. Hope it’s not as bad as I’m starting to fear.

1 person can infect 4 and there is no cure. That is bad enough and warranting the quarantine. Perhaps China wants to save the the face after the SARS outrage. They want to be a medical superpower but their previous outbrakes showed how flawed their whole system is.

here a french news on it ici.radio-canada.ca...to resume we got a antena for buisiness to start dev. it free of charge.
edit on 25-1-2020 by Dolby_X because: (no reason given) 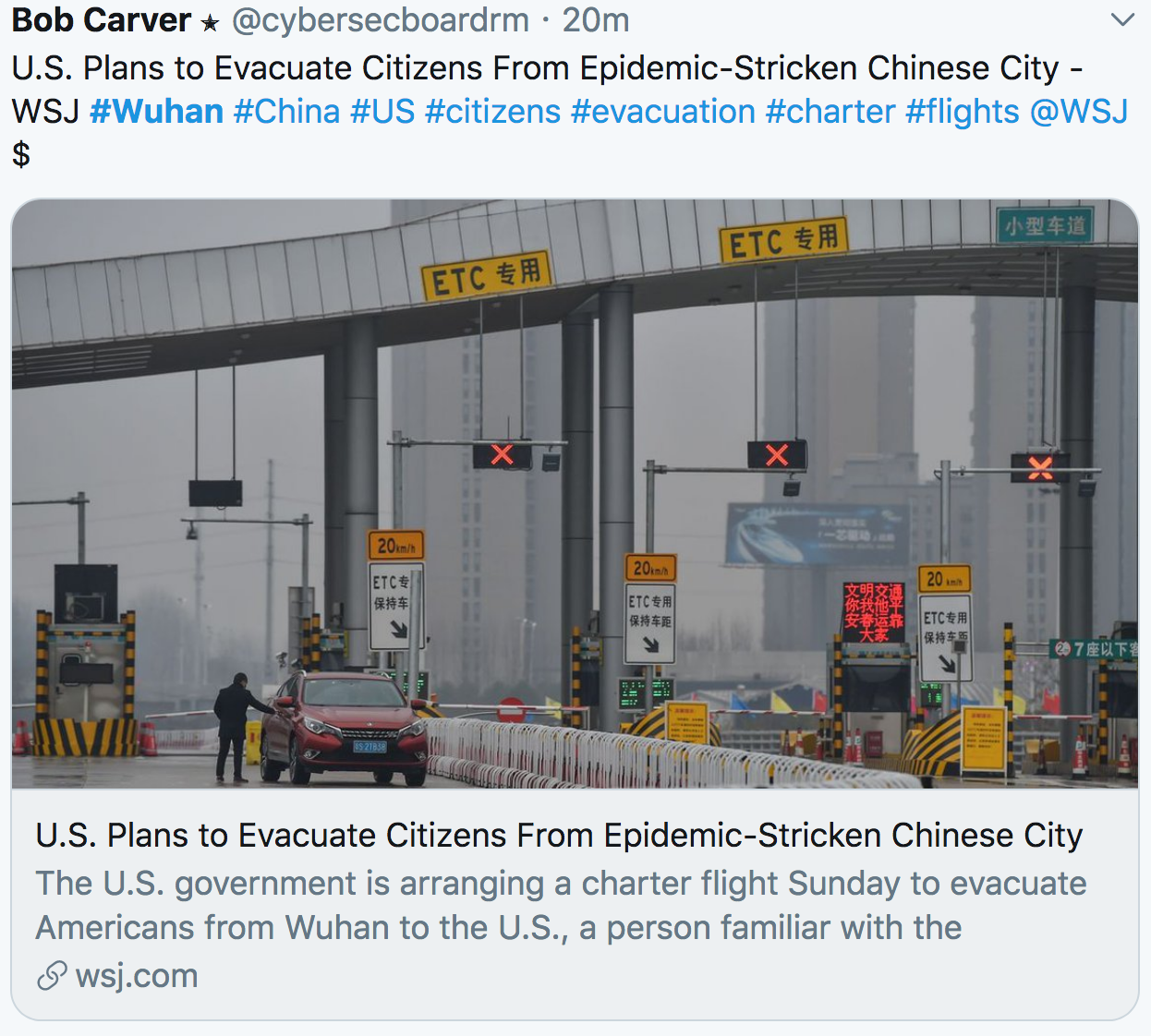 This may be the all-time most foolish ATS comment and that’s very, very difficult to achieve.

originally posted by: AlexandrosTheGreat
Rumor around the net is wuhan just opened its 5g transmission and this is not a virus but that.

Also significant is Wuhan’s push towards being a smart city. It has already implemented China’s first 5G smart street-lamps which are more energy efficient as the illuminance is adjusted based on road usage, weather and natural light conditions.

Article from a few months ago.

🤷🏼‍♀️ Literally the great divide in this country, and potentially the world, is whether or not you believe the “tech” is going to save us and transform our world for the better, or rather it’s going to enslave and or kill us.

There’s massive amounts of “evidence” for either side. I guess you come to a crossroads...

Cities here in the USA are beginning to roll out as we speak.

Not fear mongering. Just saying. Lots of information out there about all this.... much of it is old, but seeing reality play out as it is, I’m looking at old “too crazy to be true” stuff in a new light.

originally posted by: texasgirl
I can't keep up with these threads. There's at least 10 circulating on ATS right now. Normally, a pandemic topic only generates a couple of threads with only a few dozen replies, with a lot of debunking and posters calling it nonsense.

It feels pretty spooky how everyone here is taking it so seriously (and rightly so).

I must say that this is the best site on the internet for up-to-date info on the cornovirus situation! Most here are well-informed and back there statements with data.

I also think it will be important to stay ahead of the curve....
Watch for movement in the background... National Reserve.... Any info regarding FEMA Camps, etc.

Lack of supplies on Amazon..

The country is facing a "grave situation" Mr Xi told senior officials, according to state television

This province Is where alot of face mask manufacturing is located.... Look it up...


Alrighty... That isn't good for China ...prayers out to them ....god bless everyone

I agree, and being in the company of such intelligent members who do their research is impressive.

I do feel like I'm missing information when there's so many different news updates on so many threads.

originally posted by: ShortBus
Perhaps the first guy was an important biotech researcher and got special care? 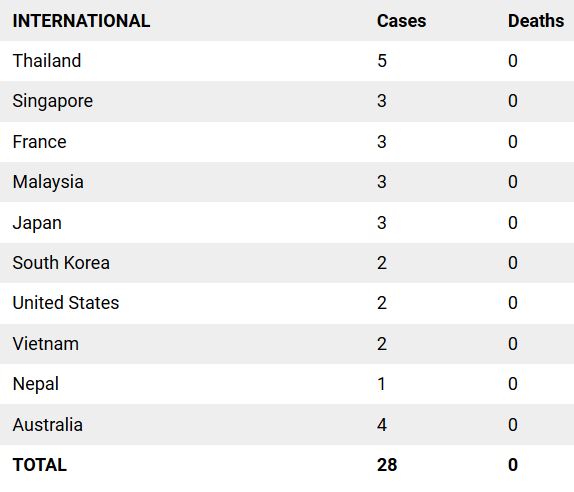 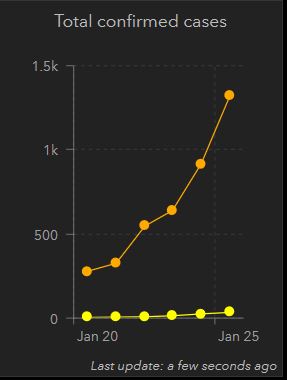 posted on Jan, 25 2020 @ 10:57 AM
link
Cruise ships are screening passengers and refusing boarding rights to those with fever:


Astro Open Cruises (China owned), Norwegian Cruise Line, Costa Cruises are all screening passengers and banning those that have a fever from boarding. It's unclear whether these are all passengers or just those from China.

A Friend of mines husband was admitted this morning here in town with symptoms of severe pneumonia. That is all I know at the moment. Will update when more details become available. Stay safe everyone!
edit on 25-1-2020 by slapjacks because: typo