posted on Jan, 23 2020 @ 02:04 PM
link
I think I might have accidentally discovered a reason why stars move faster than predicted.

As you most probably already know, one of the reasons why we think dark matter exists, is because stars are observed to move much faster than they're supposed to. An equation from Newton shows how fast a star with a certain mass is supposed to orbit another mass (the center of the Galaxy). But when came the time to measure star's speed, it was found they were going much too fast. So some think that there's more mass than we can see - dark matter.

However I might have found another reason why stars could be speeding.

The epiphany came as I was using my garden hose. Now you might be wondering why I was using a hose in the middle of winter. But that is no matter - as I was watching the water exit the hose nozzle, I of course had the only logical next thought any person would have: what if the hose was a star, and the water was the matter emitted by the star? Naturally, as I activated the hose, the hose's head was pushed in the opposite direction of the water, in accordance with Newton's Laws. And that's when it dawned upon me (get it? Dawn? Because the Sun is a star, and it keeps on dawning? Argh, nevermind.). What if the same was happening with stars?

The only "problem" is that stars emit matter in a roughly uniform way around them. Right? But wait. The star is moving, because it orbits the center of the Galaxy. As a result, the matter is bound to clear up in front of the star, and accumulate behind the star. Now space is a vacuum. So as our star keeps on shooting matter outward, this matter will have more traction and push behind the star, where matter has already accumulated, and less so in front. 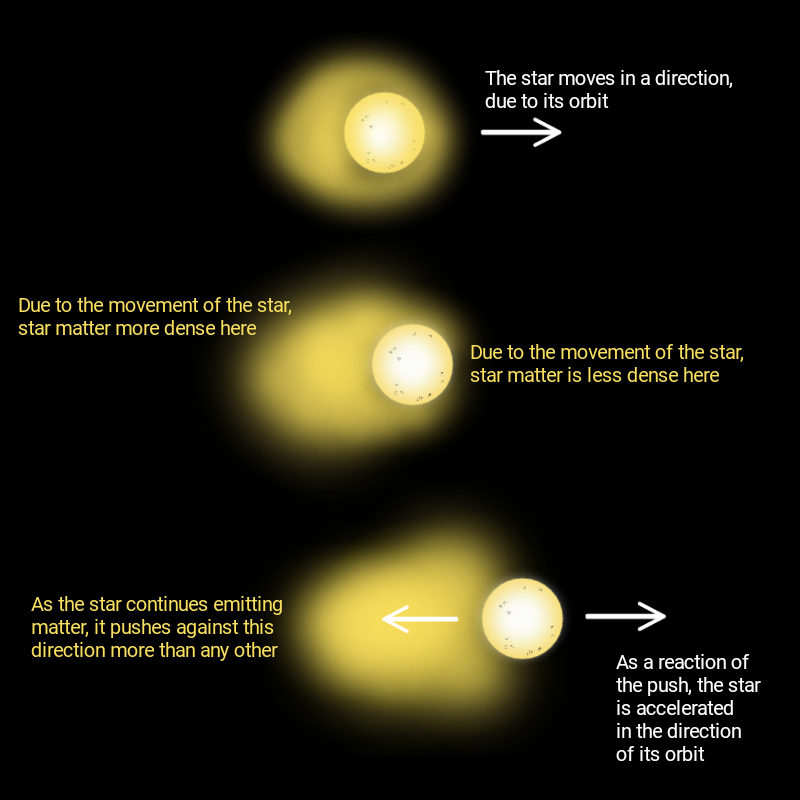 There could be multiple forces at play, but scientists have to report on something to justify the money that is spent on their research.

the matter is bound to clear up in front of the star, and accumulate behind the star


Why does the smoke accumulate in the opposite direction of your movement? What is causing it?

I don't understand how this is a source of confusion to you? That is related to the principle behind rocket engines.

But you are exhaling the smoke while moving. Shouldn't the smoke move with you? What could cause it to be pushed back?

So you are postulating a selective resistance that only affects light matter?

I believe you are intelligent enough to recognize the fact that a non-perfect vacuum does introduce a resistance to light material; whereas larger bodies will pass through more readily.

posted on Jan, 23 2020 @ 06:03 PM
link
I feel like it's more of a swinging bat. The tip of bat moves faster then the hilt and travels further distance. Stars that are further from the center of the galaxy has to travel further and faster so to us they appear to move faster then they should. I don't know I'm not a scientist but self propelled stars is in the realm of perpetual motion and all of science says that's impossible. It could all just be relative

Heavines of the matter maybe or the other way round??

posted on Jan, 23 2020 @ 06:39 PM
link
That is where the funny part of space time starts defying our notions of perception and relativity.
Human reasoning breaks down at the very Large and the very small.
I think the Mandelbrot Set should be examined and compared more so in relation to the study of our physical parameters.

It has been known for quite some time now that besides photons, the Sun emits matter, in the form of electrons, protons and other particles. en.m.wikipedia.org...

I simply propose that such matter trails behind the Sun, or any star, as it moves in space.

My fellow physicists seem to forget the fact that despite being quite close to a vacuum, space is not a perfect vacuum. And just like in any fluid, a body that is less dense (such as solar wind, or the "smoke" in our smoker analogy) will encounter more resistance in this environment than a denser body (such as the Sun, or the "smoker" in our analogy). Any physicists with two brain cells should be capable of remembering that this the whole reason why in non-zero atmosphere, such as on Earth, a feather falls slower than a grain of sand of similar weight.

Which is once again not that complicated of a concept. Similar phenomenons have already been observed, such as Osiris, en.m.wikipedia.org... whose atmosphere is so hot it is evaporating and trailing behind the planet.

I fail to understand how any of this is confusing. These are well known facts that are occurring and observed.

posted on Jan, 23 2020 @ 07:27 PM
link
Now I am not an expert in solar atmosphere, but it seems to me my conclusion is already somewhat supprted, as in this picture of the Sun we can already clearly see it is asymmetrical, with the right side apparently denser than the left side (in the picture. The Sun doesn't actually have a left or right side.):


our Sun creates a Heliosphere of Solar Wind which is material/light emitted from the 360 degree surface of our Star...
as the Sun & Heliosphere orbit the Galaxy Center.... the area directly in front of the Sun (slamming into empty space) the front edge of the Heliosphere creates a Bow-Wave (much like a ship at sea)


result: the material at the backside of the traveling Star is not a propulsion mechanism or rocket thruster arrangement...I think its back to the drawing board for your idea

either way, they are alive. they are 'born' in nebula. they have countless offspring (everything on earth, mars, venus, jupiter, etc.)

What you are suggesting kind of sounds like the way air moves over an air foil creating lift. I'm not sure how the matter moving to the rear of the star would act like thrust out an engine.

Here's my explanation on why the speed of stars is accelerating. Assume for moment gravity is not a property of matter but a force created by an electromagnetic process. Say as a star ages this process results is more gravity being generated by a star. Then the acceleration would be like pendulum spinning around your finger as the string gets shorter the pendulum speeds up. A star increasing it's gravity output would be like tightening or shortening the string.

I believe this would be similar to the Dorothy Hamill effect. As she pulls her limbs closer to her body she speeds up:

posted on Jan, 24 2020 @ 04:03 AM
link
Even if the effect you describe did produce some acceleration it would be negligible. More importantly it still wouldn't explain how the stars manage to stay in orbit around the galaxy while moving at such speeds. That is why we postulate there must be some sort of invisible mass holding them in place.