Will Earth-Based Astronomy Become Obsolete Because Of Starlink Satellites?

posted on Jan, 9 2020 @ 01:15 PM
link
I think my thread asks a valid question. Some say it’s not really a problem, because satellite tracers on long exposure frames can be erased with software and eventually in the future, there will be more orbit based telescopes, or perhaps even telescopes on the Moon. However, there are many astronomers who are “sounding the galactic alarm over Elon Musk's plan to send a swarm of SpaceX satellites into low-Earth orbit.” The world's largest organization of professional astronomers is sounding the galactic alarm over Elon Musk's plan to send a swarm of SpaceX satellites into low-Earth orbit.

stargazers were dismayed by just how bright and noticeable the train of orbiting routers is in the night sky. Now the concern has moved from chatter on social media to a more formal call for new government regulation from the International Astronomical Union.

The IAU shared the above image, which shows bars of light from Starlink satellite trails in the field of view captured by Arizona's Lowell Observatory. The trails obscure the view of galaxy group NGC 5353/4.

Thousands of extremely bright satellites could make it look “as if the whole sky is crawling with stars,” Smith College astronomer James Lowenthal told the Times. Worse, they could end up interfering with dark sky surveys and large telescopes.

“If there are lots and lots of bright moving objects in the sky, it tremendously complicates our job,” Lowenthal told the Times. "It potentially threatens the science of astronomy itself." 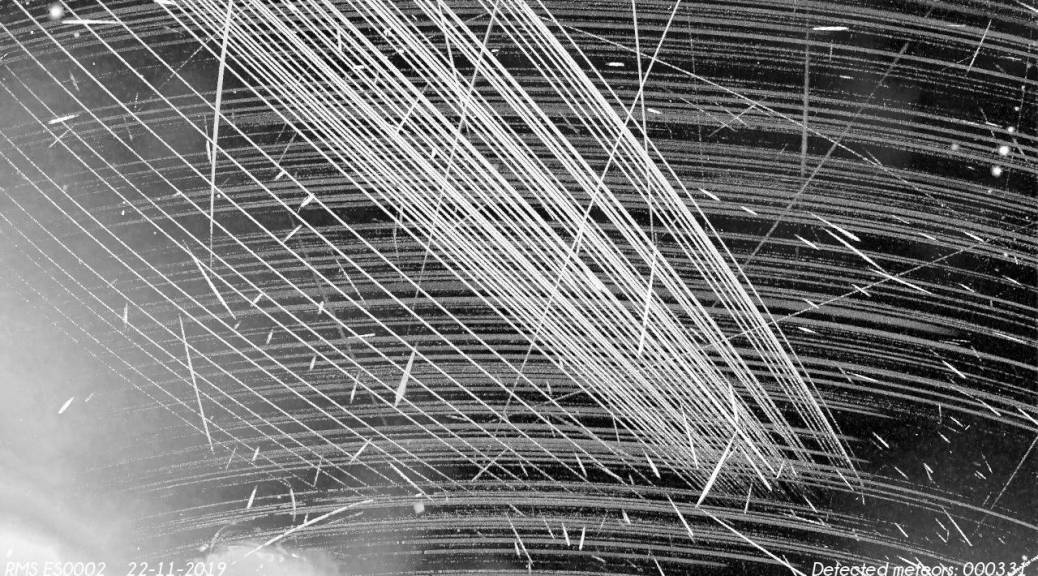 This past Monday, SpaceX adding 60 more Starlink internet satellites into orbit, to the 120 that were previously launched. Eventually, SpaceX will launch up to “42,000 of these satellites before the end of the decade,” which will boost Elton Musk’s company’s value to $120 billion dollars.

On Monday evening, SpaceX, the rocket company founded by tech mogul Elon Musk, blasted a fresh batch of Starlink internet satellites into orbit. The mission added 60 new versions of the spacecraft to a network of 120 already circling Earth — a total of 180 launched into space.

SpaceX may want to launch 42,000 internet satellites-about 5 times more spacecraft than humanity has ever flown

I think we should also keep in mind that Starlink opens the door for other countries to develop and launch their own systems. You think China and Russia will like an American company controlling their Wi Fi and making a ton of profit? How long before they deploy their own satellites? Then there’s Europe, who will most likely follow suit. In the near future, there could be over a hundred thousand internet satellites in Earth's orbit. Amazon, for instance, will soon launch 3,236 of its upcoming Kuiper System satellites into orbit. How many more will launch in the next decade?


So, will space pollution/space junk eventually become a huge problem in the future? Even though Starlink satellites have deobiting capabilities, this won’t lessen the “crowding” issue that exists in Earth’s orbit. When you factor in the tens of thousands of other satellites that will eventually be deployed by other countries, as well as the amount of space junk that already exists above our planet, one can conclude that the problem will certainly get worse.

Lets not forget, that people are now advocating for more orbital telescopes, since they say the days of ground-based telescopy is over. Will this clutter in Earth's orbit affect future rocket launches, or pose a risk for ISS, or even future space stations? These satellites will just add to the “parking crisis in space,” as well as to the increasing amount of clutter that exists in Earth’s orbit. Seems like corporations are solely interested in profit and ignoring the growing problem that will certainly get worse each passing year. 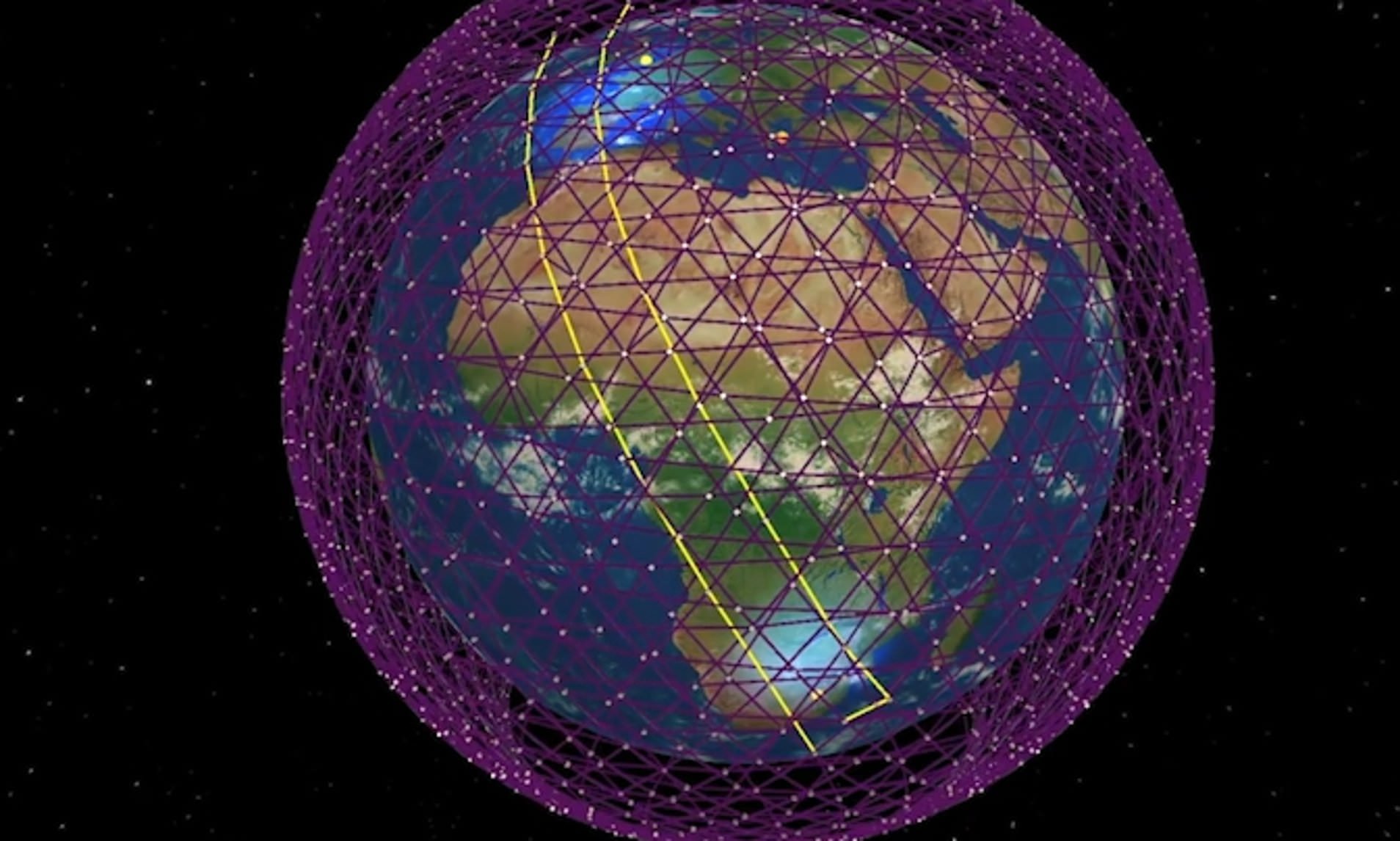 More than 750,000 fragments larger than a centimeter are already thought to orbit Earth, and each one could badly damage or even destroy a satellite.

Experts meeting in Germany this week said the problem could get worse as private companies such as SpaceX, Google and Arlington, Virginia-based OneWeb send a flurry of new satellites into space over the coming years. They said steps should be taken to reduce space debris.

posted on Jan, 9 2020 @ 01:47 PM
link
Well, I live in a place with DARK SKIES and love the night sky. The last thing I want is for my view of the sky to be ruined by hundreds of satellites. Satellite pollution.

Basically a bunch of idiot aliens that floated like balloons clogged up their atmosphere with satellites and other junk and needed a new home.

The Balloon people were a special kind of stupid, not just for trashing their planet but they had to be constantly warned on earth to stay away from sharp objects. Aquaman at one point had to tell these moron balloon people don't touch the damn coral reefs. He's a better man than me because I wouldn't have said a word.

originally posted by: paraphi
Well, I live in a place with DARK SKIES and love the night sky. The last thing I want is for my view of the sky to be ruined by hundreds of satellites. Satellite pollution.

I agree with you.
One of the last remaining connections to our ancient ancestors is the night sky.
I don't want to see a time when this is taken away from us by mega corporations.

Although,the most recent batch of star link sats have included a special "dark" one-hopefully this will work and the rest will be dark as well(if enough people complain).

I'll probably get hammered for saying this,but as time goes by I am less and less of a fan of Elon Musk-
I don't want driverless cars and trucks.
I don't want fully automated robot factories.
I don't want more money pouring into the pockets of the chicoms.
And I don't want a crazy AI dystopic future.

But I was born in the wrong millenium so it looks like I am stuck with it.

posted on Jan, 9 2020 @ 02:08 PM
link
Of course, what it's really all about, is full-spectrum dominance to include space. So naturally any kind of possible boon to mankind will not be the ultimate result. Starlink and its ilk are about the war machine.

I think that group DEVO (de-evolution) was onto something.

Exactly mate.
It seems governments and mega corps around the world are ramping up their sytems of total control.
Its almost as though they know something big is coming.

My guess is total ecosytem collapse and resource depletion.
Brought to you by the same governments and mega corps who wish to control everyone who are happy to pollute everything for a profit.

Individual liberty and freedoms are becoming a thing of the past as we enter a borg like future. 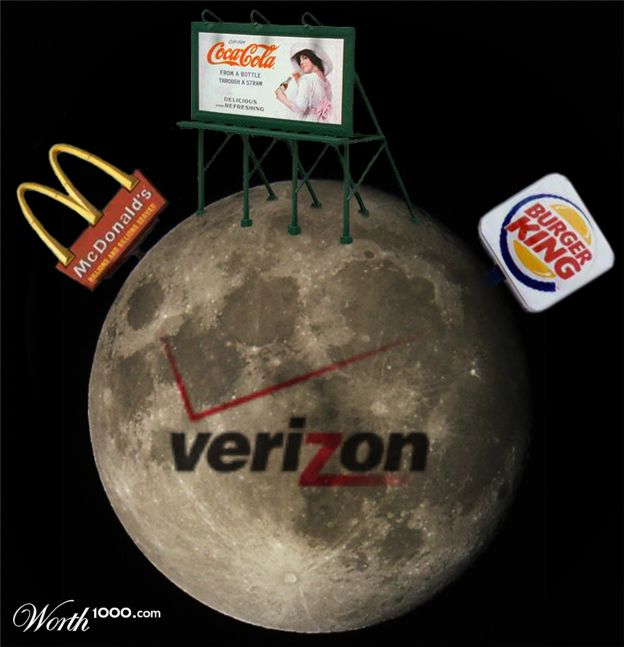 posted on Jan, 9 2020 @ 05:46 PM
link
Silicon Valley complains about pollution here on earth ... makes plans to pollute space. Why? So we can get our social media faster and more reliably?

When does technology hit a point of diminishing returns?

When deep space exploration ramps up, it'll be the corporations that name everything: the IBM Stellar Sphere, the Microsoft Galaxy, Planet Starbucks...

Looks like Palahniuk was right! But when making a new religion you would expect these minor details would fall in place. (Gawd! Has it been over 20 years???!)

As far as OP goes, we have "quiet zones" for our radio telescopes, I would expect the same for these Starlink micro-sats.

posted on Jan, 9 2020 @ 07:34 PM
link
Starlink and other satellites are not going to be a problem as they are not visible in the Earth's shadow.

Facts on this:
1. The satellites are in low earth orbit. Around 310 miles up.
2. The sky is not dark enough to take photos until after astronomical twilight is over. That means the sun is 18 degrees below the horizon.
3. The satellites are invisible when in the earths shadow. They have no light on them to reflect to the observer.
4. No one takes astronomical photos with the telescope pointing less than 30 degrees above the horizon. The closer to the horizon, the more atmosphere to look through and therefore bad photos. The only exception to this is Venus and Mercury but these are never time exposures.

I made this diagram showing the Earth and Starlink orbits to scale along with the shadow line where the satellites will seem to disappear and reappear as they travel out of and into the sunlight. 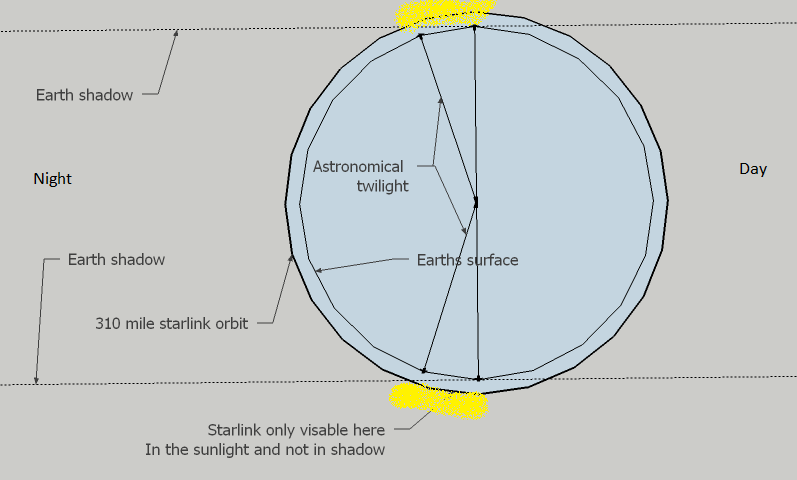 In this video, the telescope is tracking four satellites. The streaks are stars. It starts with two in partial eclipse and two of them in full eclipse shadow.

The astronomers complaining have obviously not tried to look for low earth orbit satellites. They are only visible for a short period after sunset and before sunrise. This is when you can take pictures of the satellites but this is not when you try to take pictures of other things in the night sky.

It was good to bring this question up though.