There is NOTHING easy about a pot filler!!! NOTHING!!!

First, if you intend to do it yourself, you better understand plumbing (I do). Second, you better know exactly where every stove you will ever own will go. Third, you better be good at sheetrock and finishing! There's NOTHING easy about one of these things!!!

I've had to saw open walls, run water lines, solder all manner of pipes...and I know what I'm doing, and it was still hard! I had to gauge and measure the exact location of the pipe out of the wall (that took about 3 tries). I finally cut out templates for each piece, assembled them in my basement shop and then transferred them to the kitchen.

I've dealt with soldering more fittings then I can imagine, getting everything right. It all works great, but NEVER (I mean NEVER) think a pot filler is an easy install!!! They're NOT!

P.S. - If your wife ever asks for one of these things, call a plumber, get the price and put that under her Christmas tree! Heck, I've worked as a plumber in college and it was even hard for me! Wow...incredibly hard...I had to measure things I never even thought about.

Our pot filler will be AWESOME! It's mounted against 1.5" of CDX plywood, in two pieces. A stongman couldn't rip this off the wall, BUT damage from the long arm is a real thing. Yes, I've gone over the top, but I always do.

If you'd like to install one of these things, please PM me...I can explain.

What the heck is a pot filler.

It sounds like a long faucet hanging over the stove.

Would not want one over an electric stove so I assume you are using gas to cook with.

That would be gas in a gaseous state ... not the same as the gas that goes into your car because that is actually a liquid.

Is this just a US thing?

Amazing diversity of kitchens around the world.

Yes it is a faucet above the stove for easy filling of large pots.

posted on Dec, 20 2019 @ 10:01 PM
link
I am building my steel framed shop-home right now and almost put an extra one I've got into the kitchen build.
I nixed it 'cause I can't stand cooking with tap water. Now I'm wondering if I couldn't just feed the RO line into it, they seem pretty handy.

I love doing plumbing stuff, especially with all the new pex stuff out.
I'm doing a double stall 4x6 sprayed concrete shower with all the sprayer trim toys and of course the color changing, bluetooth speaker and fan combo lol.
I'll post up some pics when done.

posted on Dec, 20 2019 @ 10:38 PM
link
Wouldn't it be easier just to fill the pot at the sink and haul it over? I have big pots, that can make two gallons of soup and I just fill up a little pot with water to add if I make bone broth from beef bones that has to cook for sixteen hours.

Beef bones make some really tasty bone broth, we just made a huge pot of Ministrome soup out of a batch I made a few days ago. It makes really great french onion soup too. I am sure you do that a lot FCD.

Is the pot filler for the restaurant or something?

I stock a real lot of plumbing fittings, enough to do maybe three houses. I have done a lot of plumbing and worked with plumbers on jobs I hired them to do on houses I worked on. I subcontracted them and worked with them on the jobs as their helper. It is nice to have experience in a lot of things, but sucks when you get old and have problems doing things anymore.
edit on 20-12-2019 by rickymouse because: (no reason given)

If my wife ever wants one I'll just run a garden hose from the sink to the stove...Make it fancy and use a pretty colored hose...

posted on Dec, 21 2019 @ 02:23 AM
link
a reply to: Flyingclaydisk
Would it have been possible to fish a PEX line up through the wall to eliminate/reduce the need for ripping out drywall and soldering?

The drywall part is easy, it's the plumbing part which is hard. First you have to drain down the house after the water is shut off. Then you have to solder/sweat pipes together inside of a cabinet (which is way small than my behemoth of a body!). Everything is in your way, and nothing is comfortable. Then...you have to solder all the other joints, put the valve back on (which was a bitch to get apart), hope you don't start a fire (which we did), and then pressure test everything before you close up the wall. It's actually a big job, this pot filler thing!

I told my wife I'm going to bathe in the thing every day from now until eternity. I'm going to drink every glass of water from it, wash my clothes...it will be my ONLY faucet! I've built many houses, and this is the single hardest thing I've ever put into a house!!! Hands down!! I thought tubs and showers were hard...until I did this thing! Man, I'll put in tubs and showers all day long before I EVER do one of these again!!!!!!!!!!!

ETA - If someone ever asked me how to put one of these things in; I would tell them to install it first, and then build their whole entire house around it!! It's really that hard (to do it right). OMG!

I thought about this for a long while before I started the project. It's actually pretty sturdy, but it took a while to figure out how to do it. Here's what I did...

1. Opened up a wall section between two studs where I wanted the fixture to go. (Of course the fixture wanted to be not near a stud (Murphy's law)).

2. Screwed a piece of 2x6 blocking horizontally from stud to stud inside the stud space, pushed all the way back against the sheetrock on the opposing wall.

3. Screwed a 1/2" drop-ear elbow to the 2x6 blocking, at the exact location I wanted the fixture.

4. Ran the water line to the drop-ear elbow.

5. Cut a piece of 3/4" CDX plywood 12" x 14.5" to fit between the studs. Then I cut a piece of 1/2" ACX plywood to 12" x 16" (my sheetrock is 1/2"). Then I screwed the two pieces of plywood together so the 3/4" piece fits between the studs, and the 1/2" piece fits over the studs. I'm going to tile the wall anyway, so I just used the 1/2" plywood in lieu of the sheetrock in this area. Plus, it gives me something to screw to which is more substantial than sheetrock. Then I screwed the 1/2" plywood into the studs just like you would sheetrock.

6. Drilled a 1" hole through the plywood at the location of the fixture, and threaded a 4" x 1/2" (ID) brass nipple into the drop-ear elbow. (This extended the water line out past the edge of the wall so I could thread the fixture on). (Note - The OD of the brass nipple is about 7/8" so a 1" hole was just right).

8. Once I had the fixture threaded onto the nipple, I could then screw the mounting flange into the 1-1/4" thick plywood blocking I'd placed.

P.S. - Of course, after this I had to tape and mud all the joints and finish sheetrock. Also, in step #4, I just abbreviated the (75) steps it took to run the water line from a utility room on the other side of the wall.
edit on 12/22/2019 by Flyingclaydisk because: (no reason given)


Would it have been possible to fish a PEX line up through the wall to eliminate/reduce the need for ripping out drywall and soldering?

Probably, but I'm not a big fan of PEX. It's okay if you run it where you can get at it (later), but I don't like to run PEX inside of a wall. I've heard too many stories about it getting brittle here in CO and developing leaks over time, especially with well water. And, if you don't get those crimp rings on there perfectly square the stuff will definitely leak. And...getting the crimping tool into the tight spaces I was working in would have made it all but impossible to crimp the crimp rings squarely.

So, better safe then sorry, I went with sweated copper the whole way. I'm pretty good at soldering, so it was just as fast for me.

About the only time saver I did do was I used a Shark Bite at the drop-ear elbow. This saved me having to solder the brass fitting with it in the wall (just to cut down on the fire hazard).

originally posted by: pheonix358
What the heck is a pot filler.

The thing on the wall... 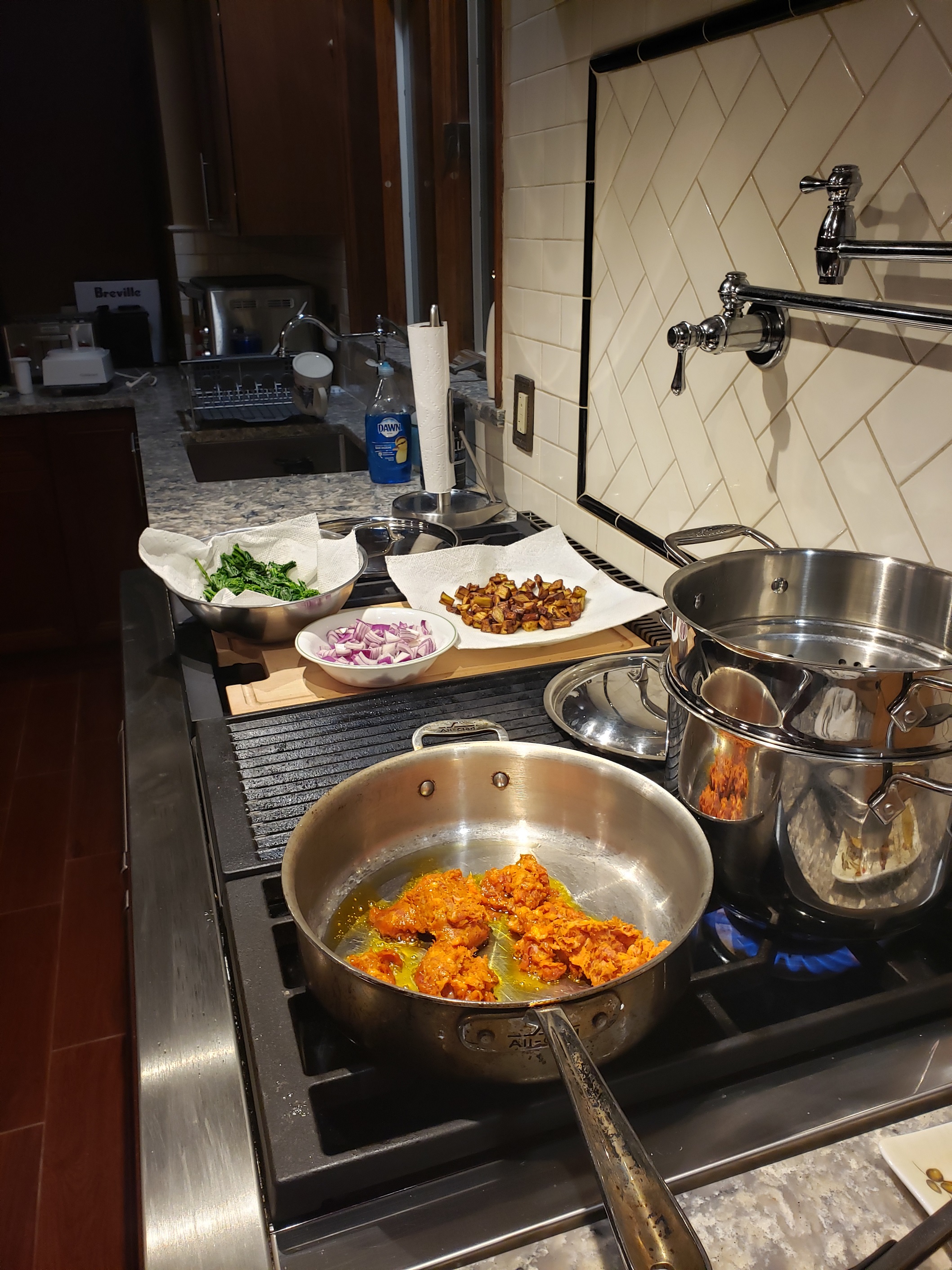 originally posted by: butcherguy
Would it have been possible to fish a PEX line up through the wall to eliminate/reduce the need for ripping out drywall and soldering?

That's what I have for mine, it's the same material that was used for the radiant floor heating.

I have not come across them in my country.

If it has been used down under, it would likely be connected to a Keg of ale.