Is a trap being set for Trump in the Senate trial?

posted on Dec, 14 2019 @ 11:48 AM
link
This article from The Hill explores the idea that Trump might fall into a trap in the Senate trial.

Can 20 U.S. Senators withstand the potentially irresistible temptation to reverse the results of the 2016 election and remove a president a number of them openly or privately dislike?

Well first of all, that assumes that all Senate Democrats are going to vote in favor in the Senate. And I have read about at least two that don't believe Trump's "infractions" rise to the level of impeachable offenses. They may still vote no.

The unrelenting opposition to Trump is not based on the fictional quid pro quo with Ukraine’s president, but rather, a desperate need by the entrenched establishment from both political parties to maintain status quo of their all-powerful club — aka, part of the “swamp” Trump sought to drain.

Bingo. I think that pretty well sums it up. And these idiot politicians seem not to get the message that a rising majority of Americans are SICK of establishment, career politicians, and want to maintain an outsider in that office for that very reason. Draining the swamp is more important than ever these days, as we can see what vitriolic partisan hatred has produced in country: A circus show, while The President is just trying to get things DONE.

But this article does raise some interesting points, worthy of discussion. That Senate trial, (assuming there is one), may not go at all as planned. At least Pence could be controlled.... right?

This could be the ultimate 4d Chess against Trump. We know for fact the establishment Republicans can't stand Trump (McConnell and his crew). I've long said that they'd rather have Democrats running the show than Trump.

I can see the weasel McConnell assuring Trump that this is dead in the Senate and them we get this crazy surprise vote where he does in fact get impeached. Maybe that is why Hildabeast is considering jumping in the fray...

Think about it. The Democrats knowingly put up all these far left loser candidates that they know no one is going to vote for. The Republicans haven't put anyone up to challenge Trump. Schiff runs this fraud impeachment. Meanwhile, McConnell et al are conspiring with Democrats behind Trumps back while pretending that the impeachment is dead in Senate.

This goes to Senate and Trump actually gets impeached.

Hildabeast jumps into the race at the last minute. The Republicans really have no one else to run.... Game Over. Hillary is now President.

Well but wouldn't another Republican such as Romney make an attempt at it if he did get impeached? Or perhaps, they just run Pence at that point, as he would be incumbent.

While I wouldn't put it past McConnell or any Never Trumpers, I think the problem with this scenario is that the Never Trumpers cannot risk their own dirty deeds coming out in a trial. And if they put on another Star Chamber trial -- lacking due process and violating basic rights -- they risk alienating the very voters they need for re-election.

Nor can any of them risk alienating the voters with a vote to convict Trump.

posted on Dec, 14 2019 @ 12:25 PM
link
I have given some thought.
But I've been nervous of Lindsey Graham to be honest due to the issue that he was in Afghanistan with John McCain. And McCain was a pretty accross the isle kind of politician. 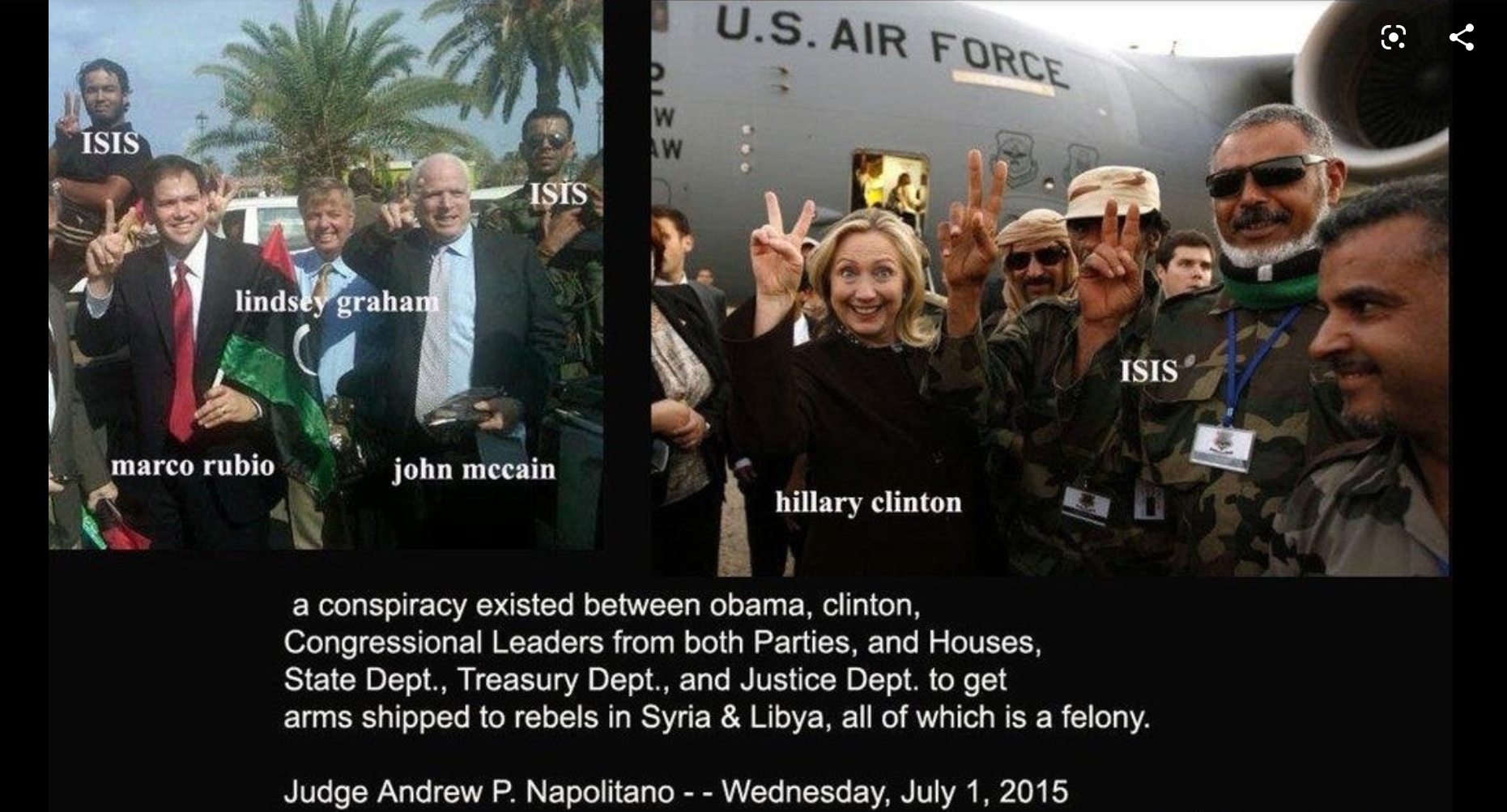 Will see where colors lie by November. But that would only mean Pence would become president if Trump is ousted, and on down the chain of command.
edit on 14-12-2019 by Bigburgh because: (no reason given)

originally posted by: TrueAmerican
a reply to: Boadicea

I meant that the Republican Never Trumpers cannot risk alienating Republican voters by working against Trump or even convicting Trump... Having said that, of course, some would say that those voters have clad-tight blinders on too, with the sole, laser-targeted objective of KEEPING this President in office!

Our critters have created quite the tempest in a teapot for themselves!

originally posted by: Sookiechacha
a reply to: TrueAmerican

Only if McConnell isn't dirtier than dirt himself... I don't believe that for a NY minute!


But that would only mean Pence would become president if Trump is ousted, and on down the chain of command.

This reminds me of "House of Cards", season 3 I think.

Republicans would be wise, in my opinion, to stretch this thing out till after the 2020 election, assuming that Trump wins. Then, if need be, they can impeach and remove Trump and keep Pence, maintaining their political control. Easy to do since Trump has so many more dangling impeachments in his future.

posted on Dec, 14 2019 @ 12:32 PM
link
If they did that, you'd see the largest implosion of a party in the history of the world. Then, whats left would be nuked from orbit by Republican/Conservative voters.

Funny you should ask. I did. And it started out as a short story right here on ATS:
www.amazon.com...

You have anything to add to this thread's topic?
edit on Sat Dec 14th 2019 by TrueAmerican because: (no reason given)

reverse the results of the 2016 election and remove a president a number of them openly or privately dislike?

This impeachment is not about reversing the 2016 election. It is about holding to task a president who acts like a moron, makes a fool of himself in the eyes of the world and demonstrates dramatic evidence of being mentally incompetent.

While I do not think that the Senate will vote against him I admit the possibility. We cannot just assume that every member of the Republican Party will stoop over backwards to defend this whiny little buffoon of a president and may take this moment to pull his plug so that the Republican Party might stand a hope of nominating a decent man to represent the party in 2020. Surely there must be SOME Republicans of moral stature who place country before party. Surely.

Impeach Trump, do away with Pence, guess who becomes president?

Cause the voters they need are not republican, they need the independents and the unaffiliated to make certain they can stay around.

Having said that, of course, some would say that those voters have clad-tight blinders on too, with the sole, laser-targeted objective of KEEPING this President in office!

I think that here you have stated the core of our conundrum. Allowing ourselves to be backed into these corners of blind defensive political positions does not serve a democracy well. Bull headed locking horns with bullheaded.

posted on Dec, 14 2019 @ 01:30 PM
link
It could happen but it most likely won’t happen if they sided with democrats and threw trump under the bus based off the evidence that changes by the month in addition to what people have found out about FISA abuses on Russia gate they would be viewed as a rouge government. Political funding for republicans would disappear over night, republican politicians would lose their seats in senate. They can’t spin it the way they want like in the beginning as legitimate concern. What you wrote is a Democrat pipe dream Hail Mary attempt.

I think we are seeing the continuation of democrats attempts to control the narrative by putting trump into comprising positions like they did with Russia gate in Syria. By pushing that hoax democrats made it extremely hard for trump to negotiate with russia and it could of caused a war.

This phone call thing with Ukraine will probably morph it’s self into something later down the road and I’m guessing it’s a game that other world leaders would love to play agaisnt trump. Imagine if you will other world leaders plotting situations where they can trip up trump and then demand to have phone records released to the public. It’s going to happen. Democrats are intentionally weakening trump

Your premise makes sense but I think that they might have underestimated Trumps popularity and how that will blow back on them.