It doesn't matter what the advisor for the President of Ukraine had to say, in his first interview concerning the public impeachment hearings.

In this interview, Andriy Yermak, a top adviser to the President of Ukraine, "questioned the recollections of crucial witnesses in the impeachment inquiry into President Donald Trump’s alleged abuse of his office for political gain."

However, at this stage of the "game," Yermak's statements will only fall on deaf ears.

Why? Because the Democrats are doing everything in their power, to stop President Trump from prevailing in the 2020 presidential election.

Bug eyed Adam Schiff just recently stated that today, as he announced two articles of impeachment against President Donald Trump...obstruction and the abuse of power.

Many Americans believe this impeachment process is just another orchestrated attempt to bring down Trump, after the failed Mueller Investigation.

Heck no, those things are conveniently set aside, as Dems try to brainwash their rabid followers on MSM and on their Twitter feeds.

After all, this impeachment is what every Left leaning news anchor and journalist has called a "historic moment."

Surely, the Dems are very serious about this impeachment process and have dotted every "i" and crossed every "t," right?? 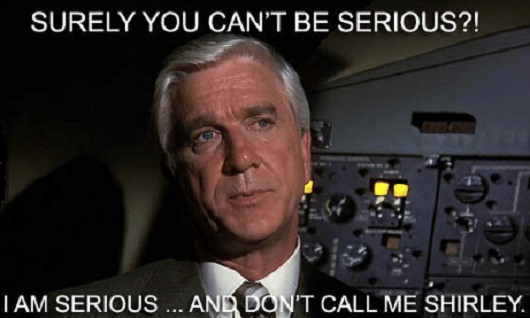 the final report from the House Intelligence Committee concluded last week that Sondland made this offer of a quid pro quo clear to Yermak that day in Warsaw. “Following this meeting, Ambassador Sondland pulled aside President Zelensky’s advisor, Mr. Yermak, to explain that the hold on security assistance was conditioned on the public announcement of the Burisma/Biden and the 2016 election interference investigations,” the report states.

Yermak disputes this. “Gordon and I were never alone together,” he said when TIME asked about the Warsaw meeting. “We bumped into each other in the hallway next to the escalator, as I was walking out.” He recalls that several members of the American and Ukrainian delegations were also nearby, as well as bodyguards and hotel staff, though he was not sure whether any of them heard his brief conversation with Sondland. “And I remember – everything is fine with my memory – we talked about how well the meeting went. That’s all we talked about,” Yermak says.

These comments cast doubt on an important moment in the impeachment inquiry’s reconstruction of events: specifically, the only known point at which an American official directly tells the Ukrainians about the link between U.S. aid and the announcement of specific investigations.

In a statement, Sondland’s lawyer said “Ambassador Sondland stands by his prior testimony and will not comment further.” Yermak said no one from the congressional committees that are overseeing the impeachment inquiry have contacted him to seek his testimony, nor have any other U.S. officials.

Legal experts said at the time that the amendment looked like an attempt to protect Sondland from accusations that his initial testimony had misled Congress. Lying to Congress is a crime that can carry a punishment of up to five years imprisonment.

-Summoning unbiased and neutral witnesses to The House impeachment hearings? Are you kidding me?

-Calling witnesses whose testimony would disprove the "obstruction" narrative? Not happening.

-Summoning people who may know the actual facts? Why? Democrats have already stated the "facts are undisputed."

Rep. Louie Gohmert: "We're not having a "factual" hearing, until we have these people that are at the bottom of every "fact" of this investigation.

Nope, not happening Mr. Gohmert. You brought up that "dirty" word..."fact."


And so, the circus show will continue.

When will it stop?

Not until Trump is no longer our President....which means, not until 2024! 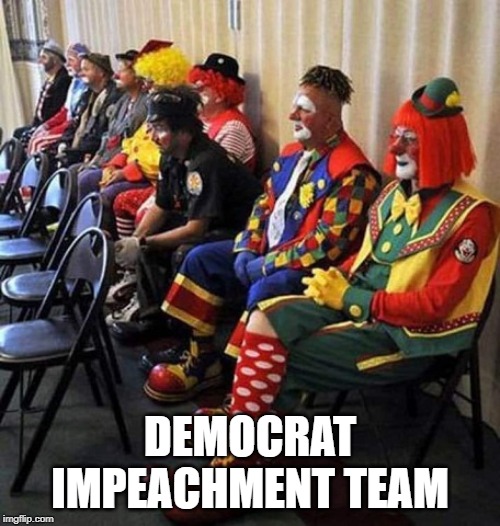 fat Jerry sure was watching that clock. LOL.

Neither one have ever mattered to Stalinists.

But the mere sight of Zelensky’s top adviser meeting with a former Trump adviser-turned-lobbyist was enough to raise eyebrows.

Yermak is a key figure in the impeachment probe against Trump, as he was the main intermediary for the Ukrainian president in efforts by top Trump officials and Trump’s personal attorney Rudy Giuliani to have the Ukrainian government pursue an investigation into Joe and Hunter Biden and widely debunked claims of Ukrainian election interference in 2016.

Lanza, a managing director at Mercury Public Affairs LLC, served as an adviser on Trump’s 2016 campaign and transition, and has described the impeachment proceedings against Trump as a “sham impeachment” and “partisan coup” on Twitter.

Last year, he also worked on behalf of a Russian oligarch-owned aluminum company to have U.S. sanctions lifted.

Who is Zelensky’s chief US negotiator Andriy Yermak?

The other firm of note is Mercury Public Affairs, which is one of the three lobbying firms Paul Manafort used to boost the image of Russia. Two of Mercury’s other clients are the governments of Qatar and Turkey. Mercury’s managing director is Bryan Lanza, who joined Mercury in 2017. Before that, he was an adviser to Trump’s transition team. Before that, he worked for the Trump campaign.

The story that keeps on giving

What next do you think?

posted on Dec, 10 2019 @ 04:25 PM
link
Everyday I become more and more shocked by what the Dems and deepstate is doing with zero evidence of absolutely anything

This is flat out treason

If Andriy Yermak, "Doesn't know" that he and Sondland could have been heard in conversation or otherwise for that matter, then, "Not being alone together" has no relevance whatsoever as to what was really said...pure and simple.
It's 'just' politique.
At least Guiliani admitted the Biden thing was rubbish, even when he was pushing for an investigation....

posted on Dec, 10 2019 @ 07:37 PM
link
man i dunno if any of you are watching the rally tonight but trump is calling every one out over this i think hes actually enjoying it in a way and if even time is casting dobut on it you know its starting to look bad for the dems

The hardliner Dem here keeps saying that it's Trump and the Republicans that are blocking testimony!!

The TV told her so therefore it's true and all these discussions here at ATS are nil.

How you like that huh? They're claiming they want testimony and Orange Man is obstructing it.

What are you even talking about. He said he remembers EXACTLY what they discussed, and that it is not what Sondland claims. He says they were never alone together. Sondland changed his testimony to appease Democrats, he did not go far enough, and then he mysteriously had sexual assault allegations levied at him after his testimony did not throw Trump under the bus and prove wrongdoing.