posted on Nov, 29 2019 @ 05:58 AM
link
Two levels of justice ? It certainly appears that way just as we have that kind of crap in America ! It has become more transparent (in my mind) there really are two types of justice and prosecutions.... One for the pedestrians and one for the elite.. Kinda like Carlin said about the elite being in the club and we pedestrians are not in it..

Scotland Yard has defended its decision to drop an investigation into claims of sex trafficking made against disgraced financier Jeffrey Epstein by a woman who says she was forced to sleep with the Duke of York.

It comes after Virginia Giuffre, who alleged she was trafficked to the UK aged 17 to sleep with Prince Andrew, criticised the Metropolitan police for failing to subject her complaint to a full inquiry in 2015.

But Scotland Yard, which says it has liaised with “other law enforcement organisations”, explained it concluded not to launch a criminal investigation as it “would be largely focused on activities and relationships outside the UK”.

Giuffre claims she slept with Andrew three times, including in London in 2001 at the home of his friend Ghislaine Maxwell. A photograph showing the prince with his arm around the then teenager’s shoulder with Maxwell in the background has dogged him in recent weeks as controversy grows surrounding his involvement with Epstein following his disastrous BBC interview.

I guess they were getting some
illegal young jailbait poontang
on the side as well? Or crazy quid?

I mean,,,why the hell else would
they fold on that?

The stand down alarm bell
must have been rung.

Dirty old Rotters.
Down in the morgue with
Jimmy Saville.
The Pistols had the Balls to try to out
those perverts decades ago.
www.youtube.com...

I'm not sure how you come to that conclusion (two tier system). The MET have set out very clearly why they didn't investigate further. The MET is the Police Force for the London Metropolitan area only. Any investigation into trafficking would be focused on Epstein (as the trafficker) so would be a US enquiry. On top of that, 17 is legal over here. That further crystallises the MET to focus on the trafficking aspect which, again, would be a US investigation.

Did anyone see the royal apologist defending prince andrew by saying that he wasn't a pedophile because the girl was 14?
edit on 29-11-2019 by wheresthebody because: (no reason given)

And the world will continue to treat them as their Gods.

That is what they want you to think.
Once you no longer allow them to
control what you believe they are done.
They are not "Gods".
They are only weak people who give
shelter to negative spirits.
The greedy enslavement class of
spirits. In trade for eternity.
The lowest level of energy gives
the short term highest level of return.
The souls of sloth are smitten.
Shiny Star to you
edit on 29-11-2019 by Wildmanimal because: Add Content

I'm just waiting for this society to devolve into violence so those of us who have been abiding by the laws, won't have those laws in our way. I'll be coming for these rotten mother #ers. It's inevitable.

I would be honored to have your back.

The UK supreme court is the HIGH COURT which is answerable to the QUEEN and there authority come's from the crown.

The Police only have a QUEEN's WARRANT to give them any more authority than any other citizen.

The QUEEN has the constitutional right to SACK any prime minister if she does not like him though it has not been used it remain's a trump card in there arsenal.

Fact is we need to abolish the royal family's status, make the NAVY, ARMY, AIR FORCE, POLICE AND COURTS answerable not to the crown but to Parliament and by default the people.

As long as it stay's this way all the royal family has to do in order to get away with any crime they feel like is to keep it covered up.

We were a republic for a time but the Parliamentarian's decided to ban BOOZE, it was the thirst for ale that is the sole reason that we ended up with a foreigner and all his successors since put into power as our head of state.

We no longer drink as much - though we do drink more wine than the French apparently so why do we need them again?.

posted on Nov, 29 2019 @ 08:03 AM
link
They didnt refuse to arrest julian Assange . Yet this pervert is not even worth questioning ? The savile gang is truely in control Big ears and savile and now andy pandy and epstein . I wonder which nonce will be outted next, connected to some other Royal . Its time we got rid of these parasites

We don't need them, never have.

I think when Liz finally goes we should just say 'thanks, you've had a good run now its time to go into the real world and get a job'.
Enough is enough.

But this isn't about that; as has been explained, as far as we can tell no actual law has been broken here in the UK - that's not to say Andrew isn't thoroughly repugnant - and as such its a matter for US Law and its agencies.
And of course Andrew and our police etc should co-operate fully with their investigations.

Speak for yourself....don't judge us all by your own personal failings!
edit on 29/11/19 by Freeborn because: (no reason given)

It seems this is more about the law than the investigators/investigation.

The age of consent in London is 16 years old. The girl in question was 17 years old. I haven't seen any evidence/proof that Prince Andrew forcibly raped her. I have not seen claims that money was exchanged. And if human trafficking charges are applicable, since she was trafficked from and back to the USA -- by Epstein/Maxwell, not Prince Andrew -- it seems to me that they are right in stating that is our issue to investigate. It might have been nice for them to offer their complete cooperation and assistance to the USA in doing so, but I would assume that is the case anyway.

But as far as Prince Andrew specifically, what more can they really do? What crime was committed in their jurisdiction? What crime do you think should be investigated?

If the prince was living in Nebraska it would of been legal to marry at 14 at the time, it has now raised the age to 17. Now Alaska and North Caroline still allow marriage at the age of 14.
edit on 29-11-2019 by PhilbertDezineck because: (no reason given)

Crikey! Nah didn't see that but I'm having comms issues in the middle of a bush fire disaster, Epstein and that Prince are the furthest things from my mind at the moment.

Maybe gossip news on the rich and famous might focus on 'Russell Crowes' house. Just down the road.

Prince Andrew was a helicopter pilot. Maybe, in his best interests, he might pilot a fire fighting chopper to save the interests of the Windsor realm over my way.

Sadly nah. Just day dreaming. No magical prince will fly in and come and save our houses.

Kind regards, from "used to be a monarchist"

posted on Nov, 30 2019 @ 05:35 AM
link
Randy Andy is probably being punished about as much as he will ever be for embarrassing the royal embarrassments. Put under house arrest, of sorts, his personal flag removed from one of his estates [oh, the horror], his 250k pound public allowance terminated, and the appearance of internal shunning by the Battenberg family may be enough to account for his behavior to the public.
It will be interesting to see if he is ever rehabilitated and slipped back on the royal dole once this blows over. Our Brit friends may be able to police the parliament and point out any such chicanery to their fellow citizens [and ATS, of course] should some committee or another accidentally include him on the list. Meanwhile, the feckless wonder of a prince still has serious income from his estates and now has nothing to do except wander around and insert himself into the issues and lassies of the day.
What a life.

Sounds pretty warped, I feel bad for girls living in those states. 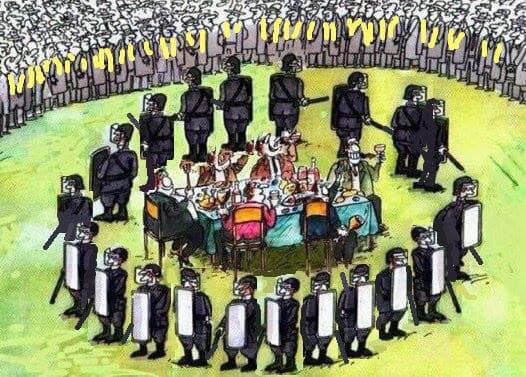 The entire justice system was invented to keep the grockles under the heels of elite Satanist jackboots. It all keeps them safe, and keeps us in line.

If WE step out of line, WE go jail.


Rules and laws are made by them, for us to obey.