Speaking from Toronto by video link, Bender told the Florida District Court that he met with Qatar’s Secretary to the Emir for Security Affairs Mohammad bin Ahmed bin Abdullah al-Masnad and two other senior Qatari officials.

According to his sworn deposition, the three officials told him: “If it wasn't for our cash, Ilhan Omar would be just another black Somali refugee in America collecting welfare and serving tables on weekends."

Bender testified that the officials asked him to recruit American politicians and journalists as Qatari assets, and that when he objected, was told that several prominent figures were already on the payroll. US Congresswoman Omar was described as the "jewel in the crown," he said.

So, if these allegations are true, which she denies, then she has committed:
Immigration fraud, marriage fraud, campaign finance fraud, and now this. She's at least committed espionage, maybe treason, maybe sedition. She's quite the number isn't she?

How has she not resigned yet? I mean, katie hill had to resign for campaign finance violations and an affair with a staffer. Omar has done that and more! Yet there she sits.

Above everything else going on right now her being gone out of
this country should be top priority.

posted on Nov, 26 2019 @ 04:08 AM
link
Sounds like an expose for Fox News. Are they paying attention to anything besides the faux impeachment?

originally posted by: Trueman
a reply to: Dfairlite
It's hard to know if she's there to discredit her party or her religion.

A mental institution? No, she belongs in Guantanamo with the rest of the world's worst.

originally posted by: strongfp
What about all that other stuff about her? Anything happen with that?

She got fined. So there's a start.

This sounds bad. Sounds like foreign influence. Better get some dossiers going.

It's testimony in Florida District Court.

So is testimony only believable if it's against Trump? Anything against your little terrorist princess must just be racism huh?

Sorry, but that's rather hypocritical coming from you of all people.

Good enough for a FBI FISA.

Trumps a Russian asset. You don’t know what is in the Mueller report....

How many times was that posted by you?

Why is this credible?

originally posted by: Sillyolme
credible to who?


I don't remember you having this problem with it came to Trump.

The Qatar government sued to have Muslim Mohamad Tawhidi's Twitter account banned, even before this story broke. 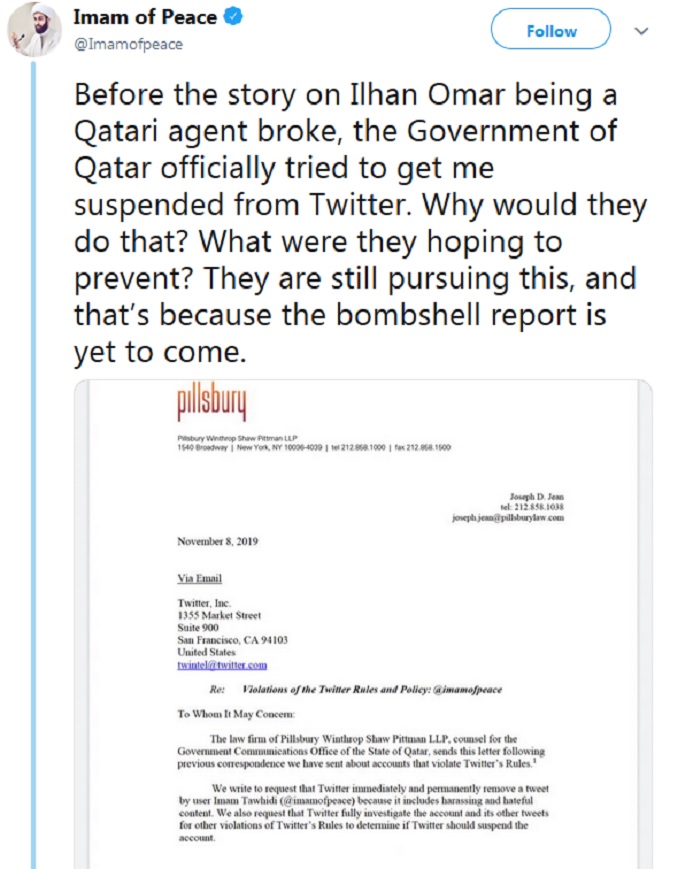 WTH dude... what did she do? Aside from being born an arab?

Because it's sworn testimony in a court of law...