This Bill has to be thrown out already in my opinion.

The exemptions list below shows that Entertainers are maliciously being targeted and bc they are using AB5 as a tool to abuse certain groups of people, the whole thing needs to be tossed now to set an example.

I hope I am right bc this Bill is certainly not right.
I mean if there ever was a time we could put aside our differences and maybe agree on a single idea that we can focus our energy on, doesn't this seem to be the right one? When some overreaching power is about to attack INDEPENDENT Entertainers? Not the guys on expensive world tours, they are attacking The Piano Man. 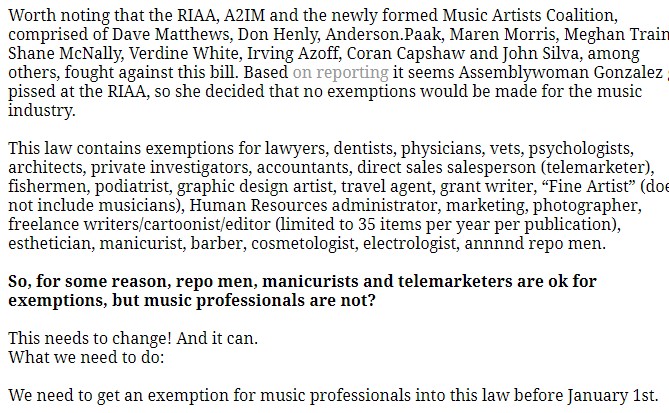 This is just one example of why California is failing fast.

Ya got crap in the brain

Ya got crap on the streets

Ya just a crappy crappy place.

The entire music industry needs a complete make over.

But RIAA and the other biggies do not want anything to spoil their gravy train.

It would stagger most people if they knew how many in the business have to actually start court action to get money they are owed. Slimy business.

From my understanding this Bill was written to maliciously affect a rather large class of people at the center of their industry. Entertainers in California. AB5 basically became weaponized and I feel the whole Bill No longer represents American Values. Also the Bill targets The Entertainers ability to be an Independent Contractor. And taking away anyone's Independence literally is the opposite of American Values.

Id like to think the Government sees it my way and simply tosses it in the trash where it belongs. Next to the plastic straws made in some poor land ran by a man child dictator that never had to work a day in their life. There's plenty of oppression in the world still. I don't know why a Bill this blatantly weaponized against A large group of individuals would be even considered now by our elected officials, as if we are like the dictators who are ok with the abuse of targeted individuals. Just sayin' Sounds DOA to me ¯_(ツ)_/¯

posted on Nov, 26 2019 @ 02:58 AM
link
Really successful Artists and Entertainers give a distorted image of what most entertainers lives are really like. The majority of entertainers are not wealthy and quite frankly choose their passion and freedom of expression over monetary possessions and shiny objects. I have noticed that the movement against this bill isn’t getting a ton of attention and its rather disturbing to me.

Everyone can band together to care about a bunch of rich lawyers voted into office and put tons of energy into defending someone that doesn’t even need their help. But if a large group of people are targeted and needs the public’s help, no one is around bc real victims have already been stripped of anything to give and helping them doesn’t give enough clout to brag to friends about. Pitiful

Independent Entertainers are the most dedicated group of people to our freedom of speech.

If the bill passes then the govt just decided that they can take independence away from any group they want and force that group to join the machine or be sent to slaughter. Think about it.
edit on 26-11-2019 by tonycodes because: (no reason given)