originally posted by: DanDanDat
Bolton must think his followers are dumb.


Quote of the week! What else can be said about this topic.

originally posted by: Mach2
I'm a Trump supporter, but I'm a bigger supporter of freedom of speech/expression.

If the administration did anything to interfere with the use if a preexisting account, they are wrong, and need to be held accountable.

If it was Trump who made the call, he needs to make a public apology.

That being said, I'm not sure how they could have locked him out, as I doubt the twitter powers that be would be accomplices in such an endeavor, which would seem to be necessary.


Okay -- let me give you a run-down of what's going on and where things happened.

White House geeks have (for years) been telling people to use government accounts for government tweets and keep their private accounts for other tweets. During his term in office, Obama did just this... the Presidential tweetstream was active and his personal one was only occasionally active (for "Christmas cards", if I recall correctly.) He encouraged others to follow this procedure (I remember this because I was in cybersecurity in early days) It was ruled (before his term) that government electronic communications (including tweets) were public record and even if you wanted them deleted, they would still be preserved.

Trump (and others in his administration) were told this. He recently (within the past year or so) lost a case where he tried to block people critical of him from his personal Twitter feed... only to be told that because he was using it as official government channels, he couldn't block anyone. Cue micro-tempest. Even when he deletes his own tweets, they have still been captured and are part of the government archives (he was warned of this and I don't think he understands.)

I see this same situation with other politicians (though not all of them. My state representative does have two accounts and carefully separates what's on them.) And those who aren't listening are going to go through this.

So when he left office, the standard procedure for the IT professionals is to lock down accounts (repassword computers and archive them (at least I hope they archive them), etc, etc. That means locking Twitter accounts... and since his had his name plus job title, then I'm sure the IT guys contacted Twitter and said "lock it."

They don't have to have the password and they have an arrangement with Twitter (I feel certain) that they can shut down official government channels when someone leaves for security reasons (you don't want hacker-trolls pretending to be various officials.)

I'm sure the IT folks have just sort of thrown up their hands at all of this. I know they've tried to insist, but Trump and others won't follow policy. After reflection, I see this as a natural consequence of not following the policies originally set out by the government IT folks who tried to prevent this sort of thing.


Like your office computer and office email, things used to do official business (and this includes email and Twitter) slip out of your control. (see my comment above this for an explanation.)

Even if the white house played the dirty trick of changing his password on him after he left; couldn't he get Twitter to reset his password?


If I'm reading it correctly, he had to prove that it was his real account and not the government-issued one and then they had to go through the "archiving this" and confirming (I don't think Twitter's stupid enough to give a password reset on big public accounts without a LOT of checking.)

So... the dimwit here is Bolton for not following the procedures that the previous administrations tried to set up and enforce.

At least, that's what I think I see, speaking as a former IT person and a computer geek (and having taught and dealt with a lot of government people and older (my age) people.)

Honestly I have to stop and think...
Is this the best use of our time as a nation? Wasting our energy trying to figure out if some boomer is technology illiterate or the victim of some nefarious Donald Trump scheme.

My money is on the former considering 100% of these accusations have gone no where.


originally posted by: BlueJacket
a reply to: Byrd

Look, whenever I have left a job, all of my pws are disabled immediately...I dont see an issue personally.

I still have issue with that...look when I was the formulator of a company, anything I wrote, created, or worked on...from my mind, or not...was/is owned by the company paying me at the time.

originally posted by: Sookiechacha
a reply to: Byrd

I have a hard time believing that this is a "he forgot his password" thing, with all the lawyers and publishers Bolton has at his disposal.

Dear Jesus, this is one of the signs of the apocalypse.

We are all doomed.

originally posted by: ByrdSo when he left office, the standard procedure for the IT professionals is to lock down accounts (repassword computers and archive them (at least I hope they archive them), etc, etc. That means locking Twitter accounts... and since his had his name plus job title, then I'm sure the IT guys contacted Twitter and said "lock it."

I wonder how many other officials had their accounts locked. I never took Bolton as being a pro-twitter guy anway.. Its strange he's even commenting on it to be honest.

I've always thought of Bolton as being under the thumb of Israel. I know Trump has a very close relationship with Israel and is Pro Netanyahu and their Israeli/Palestine positions. Maybe Israel and Trump are playing Bolton?

He sure looks political, since his 'unblocking' 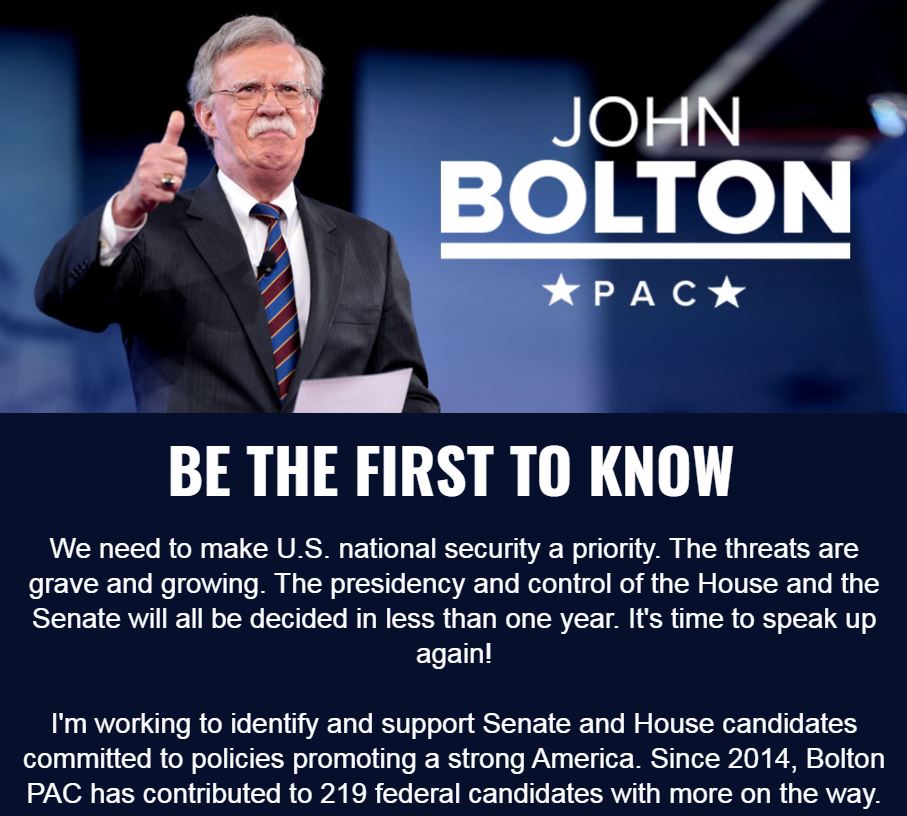 Nope. Not while in government employment. I'm sure his gov employment contract he signed has Security implications, and restrictions, of which he would be violating...even in his own accts...while employed.

Not true as a private citizen...but even then.

Hmmm, I get locked out of Twitter all the time, sometimes a change in IP address does the trick. And then Twitter asks me for my birth date and my measurements and my IQ and if I worship Greta... And at one point I get tired of feeding it with personal information so I stop using it.