Bioregionalism, and the Declarative Statehood Theory 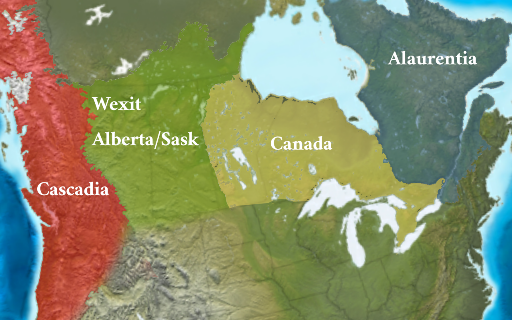 So, some of you have been asking for an explanation of what I mean by "bioregionalism". And so I wish to dedicate this thread to address such a topic.

Bioregionalism, as a name, is a fairly recent concept, and one that often directly opposes the establishment. It is more often used in the context of very large countries, such as Canada. It proposes the redistribution of sovereign power into countries whose boundaries are defined by the bioregion they are based in.

Let us take Canada as an example.

Canada is roughly the size of the whole of Europe. Yet, until now, only one city, Ottawa, is responsible for leading all of that area. This causes massive conflicts, as a single point has much difficulty to accommodate for all the resources distribution, the cultural movements, and the variety of different communities spread across the area. Bioregionalism proposes that this area be restructured in smaller countries, defined by their bioregions. These countries have the advantage of being more aware of their local environmental resources, local traditions, and local people's needs. Having their own sovereignty eliminates delays in dealing with pressing issues, allowing them to serve their people without having to wait for the approval of another power.

With the recent Canadian election results, in which the Canadian government was elected with only 34% of support, bioregionalism has become an increasingly promising alternative to the old, Canadian constitutional monarchy. As such, Cascadia has become a well-rooted independence movement on the West coast of Canada. Cascadia is the region characterised by the Rocky mountain range, with its rather nice weather. Alberta and Saskatchewan are currently engaged in Wexit, and are forming a separatist movement. That region is mostly flatland, and is known for its production of fuel. Ontario will most likely remain the "loyal" territory of Canada, as the constitutional monarchy is based in its city Ottawa. Alaurentia is seeking to reform the Quebec and Labrador peninsula into its own sovereign country. That peninsula is characterised by its harsh climate, glaciation mountains, and by its own distinct languages and traditions.

It is interesting to note that both Wexit Alberta and Alaurentia have actually already issued their own respective Constitutions. This is significant, because what I wish to address next is the legitimacy of bioregionalist movements.

So, what makes a country... a country? Almost a century ago, nations on the continent of America asked the same question. And so, to define what a "sovereign country" actually is, the Montevideo Convention was created.

The Montevideo Convention explains that modern nations may claim sovereignty, in accordance with the Declarative Statehood theory. And so, to be legally considered a sovereign State, a nation must fulfill four criterions:

The state as a person of international law should possess the following qualifications: (a) a permanent population; (b) a defined territory; (c) government; and (d) capacity to enter into relations with the other states.

A government is usually defined, in our modern days, by a Constitution.

Additionally, and this is important:

The political existence of the state is independent of recognition by the other states.

As it has already been demonstrated above, several of the new, regional nations above already fulfill the requirements to be considered sovereign countries, offering new venues to directly oppose the potential oppression and loss of freedoms caused by the established systems.

By considering the Montevideo Convention, bioregionalism might actually become the next face of very large continents. In fact it could be argued that it would be more logical of an outcome - a single city cannot be expected to satisfy the needs of areas as large as Europe. Breakdown into smaller sovereign units is logically a better method to deal with regional requirements. Those new nations need not to be at odd with one another - quite the contrary, those new nations will probably form a friendship with one another, and a mutual trade system.

It is worth pointing out that though the name, "bioregionalism", is rather recent, the actual concept is very ancient. In fact, the boundaries of ancient countries were usually defined by regional features. The idea of drawing straight lines on a map, regardless of local geological features, across thousands of miles is a fairly modern approach to politics, often associated with the greed of governments sitting in places far away from the areas of interest.

Sorry, but this is just plain silly.

Thank you! You explained these concepts very well.

In theory, Bioregionalism is similar to the original concept of the USA as literally independent sovereign states united for specific enumerated mutual interests and purposes handled at the federal level, with all other concerns handled at the local level. Of course, states' rights and powers have slowly been eroded and usurped at the federal level over the years, most notably with the Civil War between the North and the South. But the philosophy and reasoning is similar.

Thank you again for this explanation.

originally posted by: 35Foxtrot
a reply to: TaninimLong

Sorry, but this is just plain silly.


In many ways, yes. But in many other ways, no. Think about the power blackouts in Cali because of wildfire risks, in large part caused by bureaucrats sitting in offices on the other side of the country refusing to clear the forest floors of dried brush and other debris, which -- of course -- absolutely fuels the wild fires. The fools in their offices have no idea of the natural and environmental factors that have to be considered and dealt with -- literally bioregional factors that vary across the country. This is one of the reasons Trump is moving the BLM admin to the western states, where the bulk of their work is actually needed.

Um... Canadian overlords? Where did that come from? No one's saying they would be our "overlords."

posted on Nov, 23 2019 @ 08:53 AM
link
Catalonians could chime in on this. They've been having a helluva time in Spain competing with the Basque Separatists for attention and self government. Or are they the same groups? It's so confusing with the EU involved on a supra-regional basis....

Interesting idea, but...........its kind of out of date. The future direction is toward superceding the Nation State with "Unions" like the EU. The more probable future is the creation of the North American Union being the US, Mexico and Canada. These Unions create Regulatory Rules making bodies that are not elected and which supercede the authority of the participant Nation States. Thats because current thinking is that unelected bureaucrats know better what is wise than the voters who are viewed mostly as useless and poluting eaters.

Considering the Hispanification of the US and the fact the US has lost sovereignty of its southern border, I would guess this the more likely future.

originally posted by: Boadicea
Um... Canadian overlords? Where did that come from? No one's saying they would be our "overlords."

If you look at the map in the OP, Cascadia dips into the pacific northern states.

True enough, and perhaps appropriately enough geographically speaking, since the Cascades themselves aren't subject to national boundaries. Nevertheless, politically speaking, no assertion was made regarding anything south of the Canada/US border. But even if the residents of "Cascadia" both north and south of the border joined forces, the Canadians would still not be "overlords"... they'd just all be Cascadians.

LOL at myself... you're probably right!


originally posted by: Boadicea
Um... Canadian overlords? Where did that come from? No one's saying they would be our "overlords."


It encompasses a lot of very blue areas of the west coast. I don't see a problem there.

posted on Nov, 23 2019 @ 10:03 PM
link
Firstly, I thought that states and provinces were supposed to deal with regional issues. However, I understand that these political boundaries are not necessarily representative of an entire region. Geography and ecology aside, there are regional similarities with ethnicity, customs and speech that are not unified by current political boundaries.

For example, the UP of Michigan, northern Wisconsin and Minnesota all share similar characteristics with the Canadians near their borders. Even though the national boundaries may make it seem like a defined regional division, I doubt the rural folks that live near the US-Canadian border see it that way.
edit on 23-11-2019 by MichiganSwampBuck because: For Clarity

I note one source [Wikipedia] recognizes Asgardia as a micronation, but not Alaurentia. Curious if that is simply missing information on Wikipedia's part, or is there contention regarding Alaurentia's claim to be a micronation?

originally posted by: 35Foxtrot
a reply to: TaninimLong


It wouldn't be "Canadians overlords". Americans and Canadians living in the area are the people of Cascadia. In a sovereign Cascadia, those people would be as far from "Canadian overlords" as it can possibly get.

I feel you might have missed many points described in the OP.

Wikipedia automatically deletes any articles on unrecognized model nations, with the exception of Asgardia. That's because Asgardia has benefited from massive media coverage. It is interesting to note that Asgardia's founder is ex-Russian Defence, and leader of a Russia political party.

The refusal of Wikipedia from accepting articles not part of the establishment and mainstream is well known, and a major source of increasing criticism from people of many expertises.

That's why Alaurentia and other model countries are better represented as articles on another online encyclopedia, the Micronations Encyclopedia.


originally posted by: Boadicea
Um... Canadian overlords? Where did that come from? No one's saying they would be our "overlords."


It encompasses a lot of very blue areas of the west coast. I don't see a problem there.

The "blue area" is, mainly, Quebec. The people there is United by a very unique culture, and also the fact the majority is speaking french.

Perhaps, but do you sincerely believe that adding a layer of government, adding yet another union, will in any way serve the needs of the common people? No, it will merely be an excuse for more taxes, to pay all those new people.

originally posted by: ganjoa
Catalonians could chime in on this. They've been having a helluva time in Spain competing with the Basque Separatists for attention and self government. Or are they the same groups? It's so confusing with the EU involved on a supra-regional basis....

Catalonia is located outside of the American continent, and so Spain is not signatory to the Montevideo Convention. Of course the Declarative Statehood won't work there, Spain never agreed to it.

Additionally, the Catalonia region is landlocked within Spain. I know of only one country (amongst two hundred) in which that worked out (somewhat).