The reason they are up in arms is because it's about the GRAVY TRAIN OF MONEY!!!!

Best defense is good offense. When they knew trump was about to blow the whistle on their MONEY they... blew the whistle... via CIA agent and flipped accusations.

Ukraine is the Tip of the Iceberg. After Phone call with Ukraine, Trump's Office of Management and Budget requested to know where US AID for 13 programs (including Ukraine) went. This is 10's of BILLIONS of dollars in money. See video for complete list. Why the letter?

Edit to add: Here is the letter: 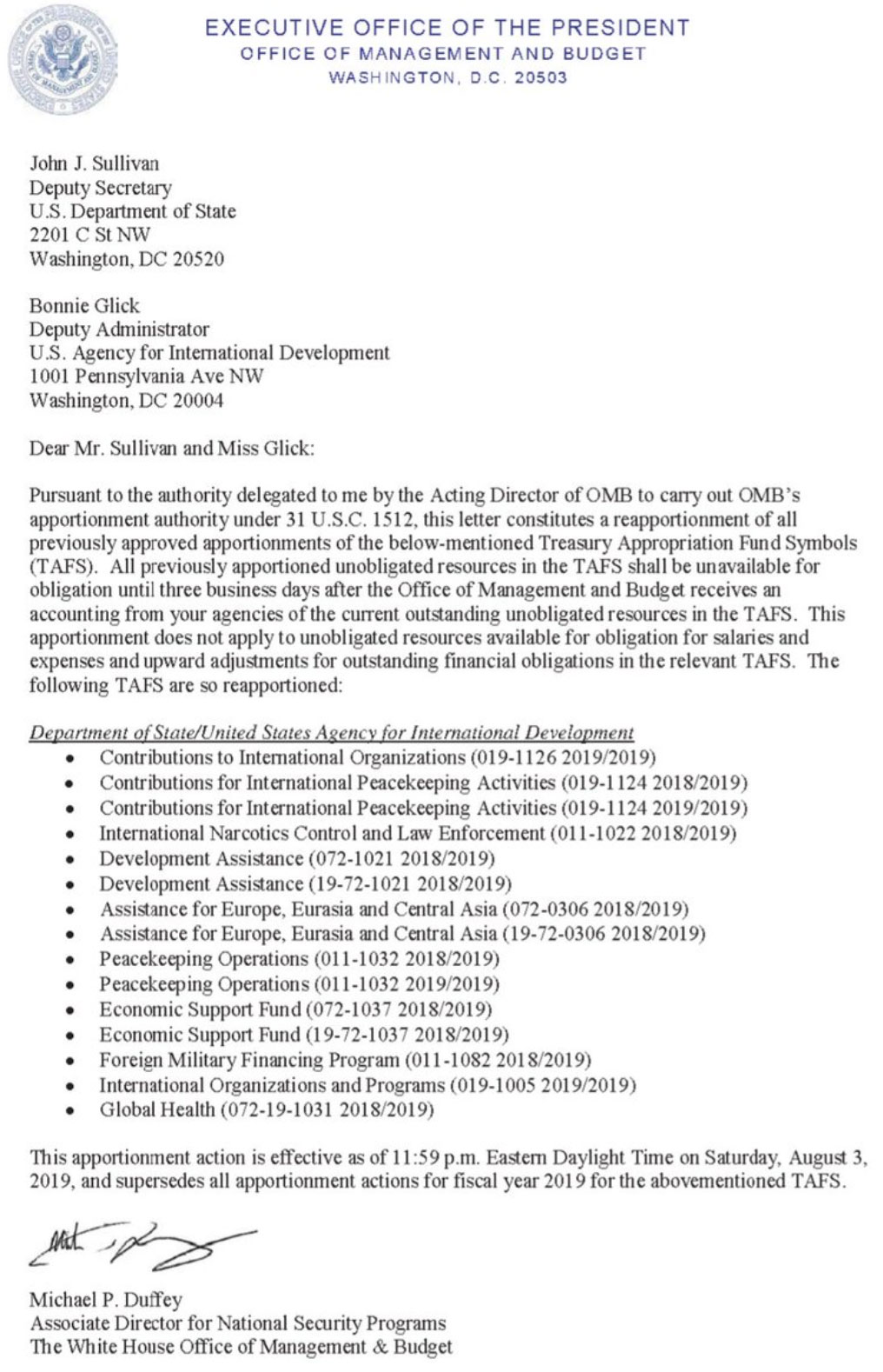 Ukraine wanted to know, on the famous "perfect" phone call, about Ambasador Yovanovitch (misspelled Ivonovich on transcript) who Trump Fired and who recently was put up on impeachment proceeding and Schiff wouldn't allowed to be questioned because she was the bag lady for this money (allegedly) and could expose the whole thing. 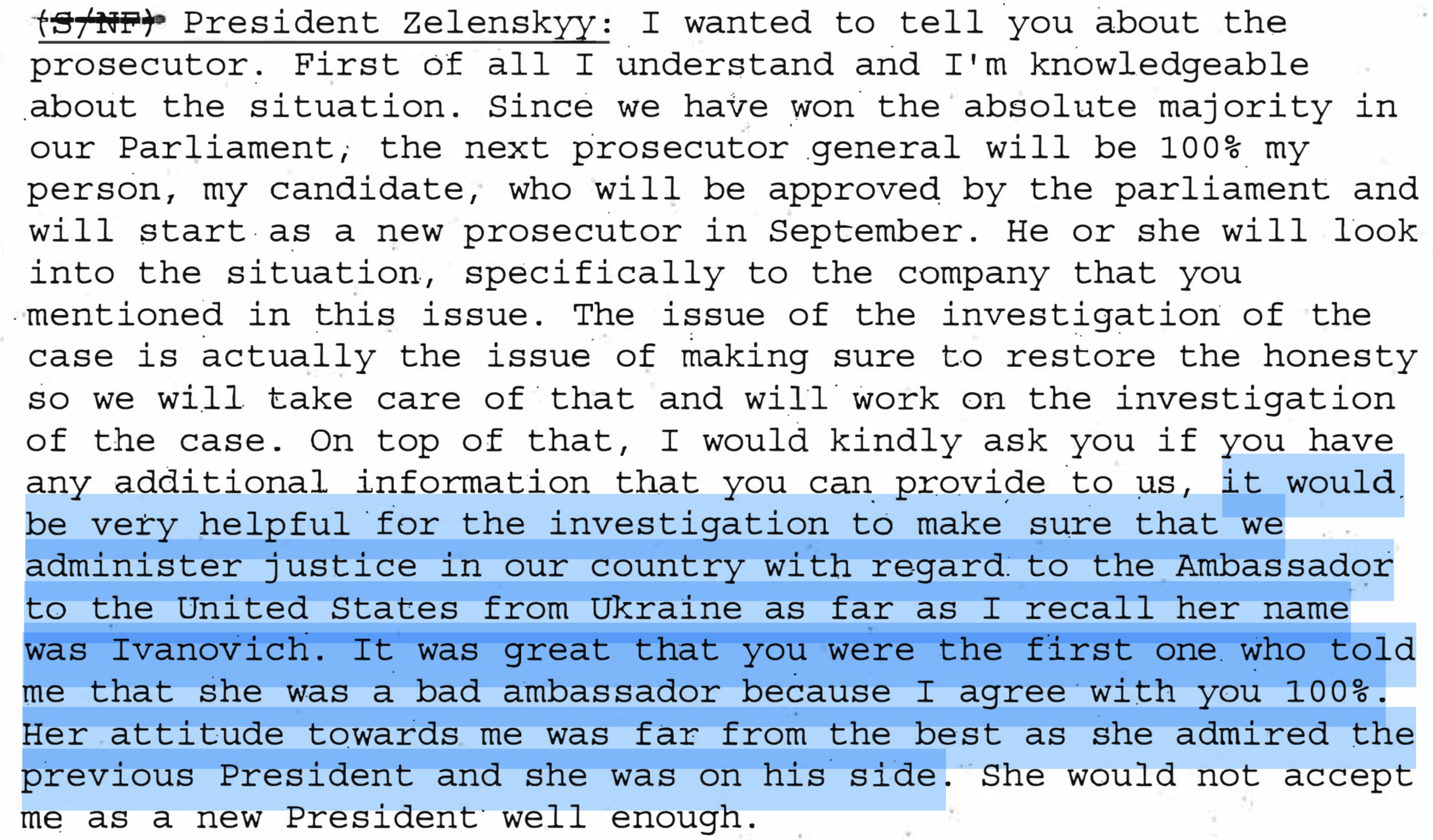 So this exposed the money being skimmed from AID to Ukraine which showed they were doing it worldwide. Thus Trump having OBM review the worldwide aid and where all the money is going. This was a "shot across the bow" of their money. THIS IS WHY THE IMPEACHMENT was rushed and is a mess immediately after this letter from OBM searching for where the money went.

This money is ALLEGEDLY going to both sides of the isle with the families of : Romney, McCain, Kerry, Biden, Clinton. Etc...

Again all alleged and conspiracy, but it makes perfect sense. All the details are in the video. I just gave a cliff note version here.

Trump is about to hit the alleged Deep State where it hurts.... the pocket book funding all their kickbacks and black projects.

What language was this non transcript transcribed from?

What happens when 90% of the media is controlled/owned by (6) corporations?

Maybe it's not as polished, but at least it's real news, not controlled media news.
edit on 22-11-2019 by pianopraze because: fixed vid link

If there is enough evidence of wrong doing try them and if found guilty put them in jail.

I welcome any proof that would put away any corrupt politician.
edit on 22-11-2019 by grey580 because: (no reason given)

I've very strongly believed since the beginning of this impeachment nonsense that this was more about protecting the guilty for their crimes than a political tactic... I never for a minute believed it was principled!

But with everything mainstream put into Democratic and Republican terms, it's a convenient and effective cover.

Been watching this for a while now; only recently started putting it all together so it made sense.

My reasoning was not based on hard facts, admittedly, but rather on observations of human nature. Leopards rarely change their spots, and people rarely change their habits... even when those habits become hazardous to them. We are all creatures of habit. This fact is understood by law enforcement well, leading to the concept of a modus operandi.

Since 2016, here's what I have seen:So what we have is a group that seems to have projection as their modus operandi. That makes me question, when I hear an accusation, if it is projection. I have heard many of these accusations/projections recently in the impeachment trials: bribery sticks out in my mind. So naturally I look for evidence that the one doing the accusing is in fact guilty of bribery. That's how projection works.

I also look at the timeline. Not very long ago, Nancy Pelosi was dismissing formal impeachment proceedings out of hand. Only after the "whistleblower" made allegations concerning the Ukraine did she reverse course unexpectedly and without explanation, agreeing to formalized impeachment proceedings. Adam Schiff as well upped his rhetoric, culminating in yesterday's impassioned plea for someone to impeach Trump. Several witnesses (who witnessed nothing relevant) have also suddenly come forward with all sorts of circumstantial data based on their own connations of things they were told.

This all tells me two things are likely:Hunter Biden is at the heart of this. Joe Biden is a lot of things: creepy, scary, confused, possibly even demented; but he is also a family man. There is no way he would stand aside and let bad things happen to his son, law be damned. That in itself is not a bad thing, but taken in context with the Ukraine situation surrounding Hunter, it does appear on the surface that Hunter Biden was leading the corruption in Ukraine and likely shoveling money back to the DNC... in other words, money laundering.

Using Burisma, Hunter could access government funds intended to aid the country in infrastructure. He could then, as a Chairman, direct those moneys to private contractors. Those private contractors could hike their rates (what else is new in any government?) and still make a pretty profit while making charitable contributions to political campaigns back here. Money is then funneled back to Ukraine through foreign aid, paid back to contractors, and donated directly to the DNC coffers. [i]Ad infinitum. No one here is going to question political contributions to sitting politicians for fear of reprisal, and Ukraine is corrupt and being well paid to keep their mouth shut.

Except Viktor Shokin, the former Prosecutor General of Ukraine who was the one Joe Biden had fired. He has made plenty of claims that he was given a list of people to not prosecute by US officials, and that he was attempting to investigate Burisma. The official narrative is that he was corrupt and dragging his feet on the Burisma investigation, but that doesn't quite add up. It was during his reign that the owner of Burisma, Mykola Zlochevsky, left the country to avoid prosecution, and only returned after Shokin was removed. I have looked and find plenty of allegations of corruption, but no proof. The closest I have found is an old case where two of Shokin's prosecutors were found with hoards of diamonds and other valuables in their homes, which was taken as evidence of bribery. Now, who keeps ill-begotten diamonds in their homes? I would expect the diamonds to be either stored elsewhere or liquidated and the assets stashed away in a nice offshore bank account.

This sounds awfully familiar to what Trump has experienced: multiple accusation, no proof, but close associates imprisoned for charges under strange circumstances (like an early-morning armed raid on Roger Stone for a non-violent indictment).

Oh, and now that there are rumors of Ukrainian investigations resuming, Zlochevsky has disappeared again... interesting.

OP, you seem to have stumbled onto another entrance to this rabbit hole. I warn you now: watch your step. It turns into a Hollow Earth when you start digging.

posted on Nov, 22 2019 @ 10:40 AM
link
The Dims game plan appears to be accuse Trump of what we do before he can get us. It has been an effective strategy for them so far, but I believe it will eventually backfire on them. You can only go to the same pitch so often before it gets hit.

posted on Nov, 22 2019 @ 11:52 AM
link
what's sad is that the leftovers here are obligated to defend the left, no matter what. So they will find ways to legitimize this, and demonize Trump over what the criminals are doing. And once this starts to flush out, we will find why Republicans have been so damn quiet over all this. (I doubt it's just democrats skimming money)

At least I know some on the right will call out corruption, regardless of party. Perhaps not all, but quite a few here have integrity. I look forward to at the very least, a clean up in aisle 2.
edit on 22-11-2019 by network dude because: fixed error

posted on Nov, 22 2019 @ 12:06 PM
link
Just follow the money....this is a great article. We can now see why Obama did not support Biden. Biden could very well be the one who goes down to protect Obama.


The timing is significant, the Examiner notes, because then-Sen. Joe Biden (D-DE) backed the bailout: “He delayed his Senate resignation in January 2009 to cast his final vote to increase funding for the Troubled Asset Relief Program before taking office as vice president.”

Another point not mentioned by the Examiner is that President Barack Obama immediately put Vice President Biden in charge of overseeing the federal government’s disbursement of stimulus funds — which were a separate program from the bailout, but which were closely associated in the public mind.

In a statement titled, “Vice President Biden to Oversee the Administration’s Implementation of the Recovery Act’s Provisions,” the Obama administration announced that Biden would be in charge of making sure stimulus funds were being properly spent, and that there was transparency in the program, with updates posted at Recovery.gov.

No, what's REALLY sad is, the American taxpayers worked hard to generate these funds to be appropriated in the form of aid to these other countries. And, this aid had a purpose of strengthening the overall health and security of many of these countries. The American people trusted our political leadership to do what they said they were going to do with the money, they trusted these people to NOT pocket the money themselves or use it for their own political gain! We trusted them to NOT further perpetuate corruption in these countries and NOT to make backroom deals to skim the money. Bottom line; the American TAXPAYER TRUSTED these people!!

Ever wonder why both sides object when Trump tries to get us out of wars? Climate Change agreements? Foreign Aid?

I imagine they have their hands deep in those cookie jars.

Maybe more. I think it's likely.

No wonder they are so mad at him. He's directly gunning for all their money.

Ukraine tip of the iceberg?

Everyone thinks there was a minor percentage kickback. What if it was the majority of these US taxpayer contributions that were deposited in numbered foreign bank accounts? What if the receivers of this American cash only skimmed a small percentage for themselves?

Ya know ... a billion dollars = a thousand millionaires.

How do ya think it is that the Clinton Foundation just all of a sudden experienced a financial decline?? Would it possibly be because Clinton, herself, emptied out the accounts into banks overseas??

Don't be gullible folks. You (and I too sadly) are being fleeced every payday. Both sides are taking your money and lining their pockets, paying their kids, buying security for themselves in foreign countries.

posted on Nov, 23 2019 @ 04:15 PM
link
a reply to: Deplorable I just punched in Chelsea Clinton & as of 2016 net worth $15,000,000 I think we can all agree on where that money came from. With her being the only child of the Clinton's. With what you said follow the money and it leads down a rabbit hole where more rabbits live. They are all covering each other and got dirt on each other as leverage and they all get rich. A lot of foreign contact goes on and money being literally stolen from the US and moved back into bogus companies, foundations, donations, crooked deals with legitimate companies. Here's 500million money that's not mine, if you give me 100million. They really think that we don't know what's going on.