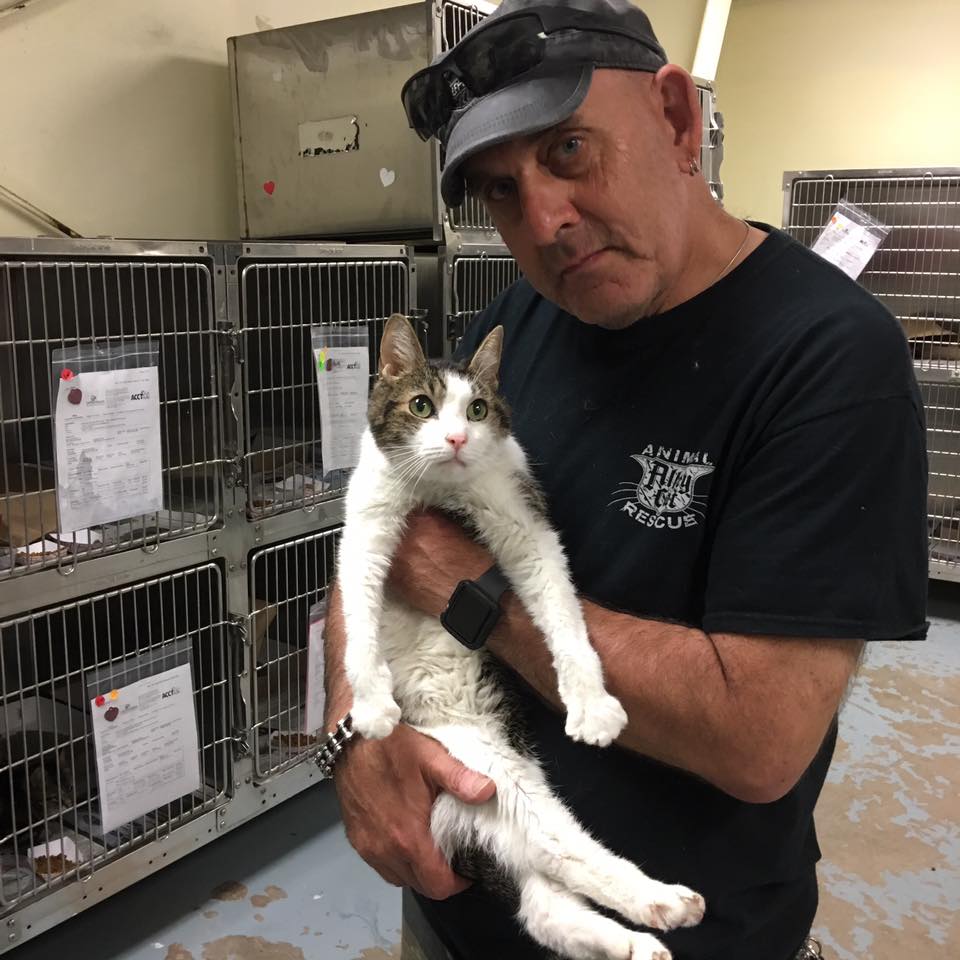 A Philadelphia 14-year-old has been charged with murder in the death of a well-known animal rescuer who was found tied to his bed, naked, and bludgeoned to death last week.

“It was a very brutal murder,” Coulter said, "it's hard to grasp anyone committing such a grisly crime, but even harder to imagine a child being involved.


Chernoff, an Army veteran known as 'Ally Cat', was a fierce animal welfare activist known for his 'incredible generosity' throughout the community. It's said he was a 'wild veteran who loves motorcycles and will talk your ear off about his motorcycles and cats'.The connection between the girl and Chernoff is unclear but none are hesitant to report Chernoff was 'naked' and tied to his bed. Police are questioning if the girl was an 'escort' who tied him up, bludgeoned him to death and robbed him - claiming she's a victim herself (?).

The whole situation is strangely unsettling - I can't imagine a 14 year old bludgeoning a man to death - then again I grew up in a different time.

I'm interested in following out this case with it's troubling unanswered questions like that Chernoff was killed with a nail-studded 2x4? What? Did he just keep one a those laying around? Did she bring it with her (intent)? Lots of questions...

14 year old 'escort'? 14 year old victim? What about just a psycho teenager with a grudge?

I've no idea. It's all just so bizarre.

posted on Nov, 21 2019 @ 01:09 PM
link
I need to read the case, but I'm going to go with the girl was an escort. Maybe the guy was killed by her pimp and the girl is takingthe charge. It also isn't unusual for hookers to rob their johns.

I cant think of any other reason the guy would be tied up naked. Some guys like that kind of stuff apparently.

Uh she seduced him?

You too? That's what caught my eye... Then I read the 'rest of the story' and it even gets more bizarre.

originally posted by: JAGStorm
a reply to: silo13


That's funny because I was confused too. At first I read it like the 14 year old girl that was charged in the killing of the cat rescuer was found in her own bed tied up. I was like huh? Read it again...huh? Okay read the story. Ah got it.

Just dont mess up and call the escortciss.

Which would support the 'escort' part - and that in the video she seems quite familiar with his kitchen.

The cats (11) don't seem to be bothered by her either (my cats would have freaked with someone unfamiliar in 'their place').

I'm having a hard time putting together a 'most generous animal rescuer' with an Army veteran who would pay a 14 year old for sex - damn that would just suck. I'm not saying it's out of the realm of possibilities - just saying it would be horrible.

Ajahnae Smaugh is accused of killing Chernoff on Monday night, the Philadelphia Inquirer reported. She was also charged with tampering with evidence, obstruction of justice and possession of an instrument of crime, according to the newspaper.

"He was one of the kindest people I've ever met and he would do anything for anyone. You are already missed and there is a hole in the heart of every cat rescuer that will never be filled."

So could this guy named a 'great man, a good man' have been kind, loving and attentive, generous to friends and animals alike - but still used a 14 year old hooker? What? Kind loving, helpful, will save any animal in town but doesn't think twice about treating a 14 year old as less than an animal?

I'm choosing there is a lot more to this story before coming to that conclusion.

posted on Nov, 21 2019 @ 01:41 PM
link
I would like to know more of the background and psychological profile of both parties.

posted on Nov, 21 2019 @ 01:51 PM
link
You'd be surprised what people do behind closed doors... The guy very well may have been a kind hearted animal lover who just also happened to like young girls too.

posted on Nov, 21 2019 @ 02:14 PM
link
Not enough details for me to opine that the girl was an escort of any sort. She could have killed him in his sleep, stripped him, and then tied him to the bed.

Heck, he could have been a perv, but it's a special kind of stupid to let someone you don't trust to tie you up. Which would have been what had happened if she were the one to kill him. I don't see anyone just letting a smaller, younger girl beat the piss out of ya.

Unless it was a surprise attack, but again I don't know. I'd never let a young girl who wasn't family in my house. That's where he messed up.
edit on 21-11-2019 by AutomateThis1 because: (no reason given)

The S&M world is bizarre indeed!

originally posted by: olaru12
I would like to know more of the background and psychological profile of both parties.


Actually, I would not.

Mate if that the case, he probably got his just deserts.

But let's not jump to conclusions, she could have drugged him or knocked him out and then tied him to the bed i suppose.

If through it turns out he's a beastie bob wrong'yin, crap happens to bad people.

Got to be a possibility.

Something seems off all the same.