posted on Nov, 21 2019 @ 09:28 AM
link
Ol’ Andy has officially stepped down from his public duties “for the foreseeable future”. According to the article, he requested it. Yeah right. Mommy is letting him save face by proclaiming it was from his own accord.

He also FINALLY feels very sorry for the rape victims. From the article:

“His suicide has left many unanswered questions, particularly for his victims, and I deeply sympathise with everyone who has been affected and wants some form of closure,” the prince said.

“I can only hope that, in time, they will be able to rebuild their lives. Of course, I am willing to help any appropriate law enforcement agency with their investigations, if required.”

Andy is finally saying the right things. Trouble is, it’s too late. He already showed us exactly who he really is. They will let this blow over for a couple years, is my guess. Then Andy will be right back in the publics eye.
edit on 21-11-2019 by KKLOCO because: (no reason given)

originally posted by: interupt42
a reply to: KKLOCO

Yup, now he’s got even more time on his hands to fondle little girls.

You know I always like to give people the benefit of the doubt.
The photo of him and the girl was pretty bad, but who knows..

You know what sealed the deal for me?

When ol' Princey felt the need to visit Epstein to say he didn't want to be friends.
Who the f flies for hours to see a person that they are not going to be friend with? Nobody.

We all know full well he was going there for one last hurrah and to brief Epstein on how to proceed. I've read and watched tons of of stuff on the royals.
Pretty much everything about them is sick. It is portrayed as some fairy tale, but it is not. Their lives are very sad
and I'd be surprised if there is one drop of happiness in any of them.

I agree, I doubt any of them are happy. What’s disgusting is, it appears that raping underage women is what brings them their happiness. I guess, when you have everything, it’s just not enough. They feel happiness from the domination of defenseless individuals.

His contradictions all through the interview looked even worse.

We weren't good friends, but i would call him while in America 1-3 times a year. If I called and he wasn't available, he would tell me to crash at his place.

I don't recall ever meeting her those years ago in a club... I don't recall anything about her... But the night of the allegations I got pizza at _____ establishment as I was watching my kids. (who knows where they got dinner on a non eventful night)

I couldn't have been seen dancing with so and so sweating profusely... I had a condition at the time where I couldn't sweat.

Edit:Oh, and my favorite... While reiterating later in the interview they weren't friends, and rather he was a "+1" to Maxwelle, he justified meeting Epstein one last time post conviction in 2010 to break things off.

Someone would have to be a really good friend of mine for me to even feel obligated to explain via text or call why I can't speak to someone after being convicted of a horrific crime... Acquaintances don't deserve an effing word from me after something like that. I doubt I'd go hang out with them afterwards though, and I'm not even a public figure... He stayed at Epstein's mansion for 3 days.
edit on 21-11-2019 by CriticalStinker because: (no reason given)

I went to re-watch the video.
Look at 3:05 on the video,
Is his reptilian eye morphing or what?
His right eye, left on the computer screen.

What is going on there? He also said he can't sweat.....hmmm reminds me of something...

He also said he can't sweat.....hmmm reminds me of something...

Reminds me of the walnut sauce when he brings up too much adrenaline as a reason for not sweating. As for getting pizza while watching the kids, it does look that way.

posted on Nov, 21 2019 @ 10:17 AM
link
An empty symbolic gesture. He will continue life as if nothing happend. Those who matter (to him) are fully aware of his escapades and give a rats furry behind, cause they’re residing waist deep in the same pond of steaming manure as he does. What we see and hear is but a mere fraction of what’s really going on behind the scenes. And Epstein isn’t a single isolated incident either, let’s not forget vile scumbag Savile, who practically had the key to the front-door of the Buckingham slime-pit. And what about that story about a group of children dissapearing, involving the queen herself of all people!?

These people and their ancestors have an extreme bloody history, and did some pretty brutal things to hang on to their power and wealth. They look upon their transgressions as if it’s their perogative, not as a crime...

edit on 21-11-2019 by 2Faced because: Only royalty, judges and schizoids have the right to present themselves as “we”

originally posted by: kwakakev
Reminds me of the walnut sauce when he brings up too much adrenaline as a reason for not sweating. As for getting pizza while watching the kids, it does look that way.

Yeah, that excuse about crossing an ocean to tell Epstein in person that he can no longer see him in person was like a moment straight out of 'To Catch A Predator'. "Seriously, I just came over tonight to tell the young girl that she shouldn't be meeting strange men from the internet. I'm just an honest to god good samaritan."

At that point, the interviewer should have just rolled her eyes and left and in walks Chris Hansen with a casual "Do you wanna explain yourself?"

posted on Nov, 21 2019 @ 04:32 PM
link
Prince Andrew pictured driving home after gping to ask the Queen for forgiveness following his complete disaster stand and approved standdown. Apparently he was smiling on the way there. 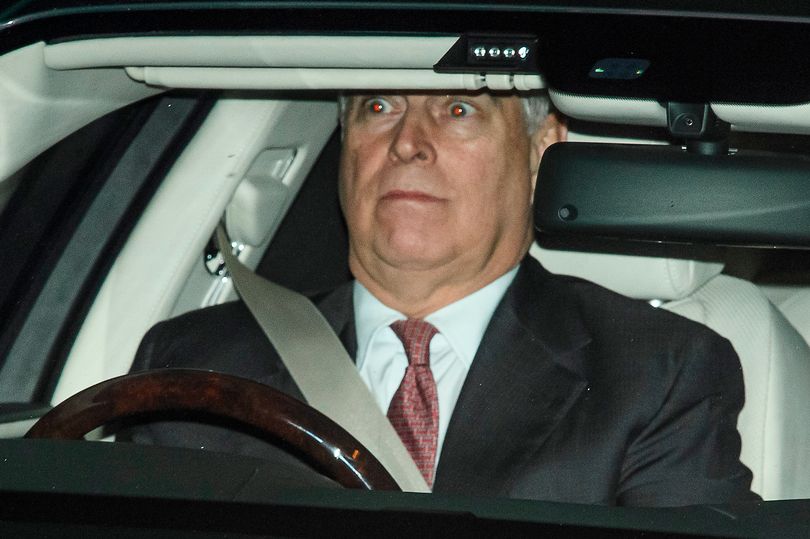 Bring back the stocks for him - the Queen could buy all the rotten fruit and veg farms are full of due to lack of pickers, saving UK farming and give them to every member of the public free or a £10er a throw to the NCA actively stopping rings catching dodgy officials or charities helping victims, providing safe-houses,

originally posted by: gortex
a reply to: KKLOCO

My gut tells me he will never receive penalty for his actions, though.

It’s been a sh!t show unfolding, right in front of our faces. We all see it — but they don’t care.

posted on Nov, 21 2019 @ 07:32 PM
link
The Queen whacked Epstein just like she whacked Dianna....Royal Family First before Kingdom …..and now she spanked little Andy....I hope he still ends up in jail....and as far as the so-called Queen goes....she is an imposter.....her bloodline is an imposter bloodline.....a placeholder bloodline that is nearly completed its period of usefulness....the Kingdom has been carried to the Rubicon of our Future by a proper Beast of Burden. Stay tuned.
edit on 21-11-2019 by one4all because: (no reason given)