Ohio University Professor Emeritus William Romoser claims there is a diversity in insect life on Mars at an ongoing conference in St. Louis.

The entomologist describes "insect-like" and "reptile-like" forms and says it appears Mars "enjoys a surprising abundance of higher life forms."

Dr. Romoser, who specializes in arbovirology and general/medical entomology, has spent several years studying photographs from the red planet that are available on the Internet. He found numerous examples of insect-like forms, structured similarly to bees, as well as reptile-like forms, both as fossils and living creatures. He presented his findings Tuesday, Nov. 19, at the national meeting of the Entomological Society of America in St. Louis, Missouri.

Snapshot of his paper

Pareidolia, or something else? Will a distinguished professor go out on a limb to present a paper like this? What do you think, ATSers?

You would think if he was to be taken seriously he would have provided a bit more evidence other then pictures of rocks .

This was posted just the other day.

I have not been able to find any file names. Did you happen to notice any file ID's.

Guess he had to work with what he has....

File IDs as in? The pics he referenced in his paper? Download the file that he posted in Researchgate...appears to be a copy of his paper presented at the conference.
edit on 20-11-2019 by Charismagic because: (no reason given)

Always a possibility, but an insect conference doesn't seem a likely platform. Plus he is putting his reputation out on a limb in front of fellow entomologists...

It looked like all you can see of the paper is the abstract (paywall). It is hard to believe a real scientist would not list the data sources.

I will look over the papers one more time.

This is all I can find and you can't really read it. 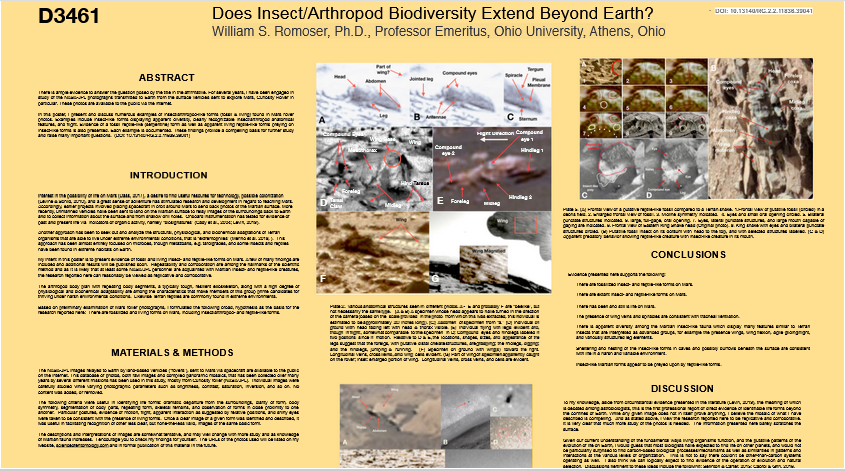 The pic does not want to upload at this time, here is a link

I did some searching and came up with this.

Looks like the paper has been withdrawn. s/ they must of got to him /s

I see them in GA also.

It would have been nice if you linked my original thread...